On Wednesday WWE announced via their website that Jim Ross is retiring, putting an end to a business relationship that started 1993 and has survived two firings (plus a number of kayfabe ones). It’s an announcement that came completely out of the blue. JR’s official exit as a television mainstay came several years ago but he’d still been very active for the company. Mostly he was involved in NXT, attending evaluation sessions and tapings and, occasionally, commentating for the league.


It’s commentary that ‘Good Old’ JR will be most remembered for. When I first started watching WWF programming in late 1998 he was the company’s lead play-by-play guy working alongside Jerry ‘The King’ Lawler on Monday Night RAW. That role was as integral to the success of the Attitude Era as anything else you care to name.


During that period alone JR enhanced an uncountable number of matches and contributed to some all-time classics. The one that immediately springs to mind is the Mankind v Undertaker v Hell in a Cell match at King of the Ring ’98. That match is incredible for the life-endangering falls Mick Foley took off and through the Cell structure. If you watch it back with a critical eye you’ll realise that very little besides that actually happens. Foley is knocked senseless after his two falls and has to be guided through a relatively basic exchange within the Cell by ‘The Phenom’. Part of the reason the bout has the reputation it does is Ross’s commentary. He helped to make Foley’s falls, in a very real way sacrifices, even more memorable and made the remainder of the match seem more animated than it was with his spirited performance from the announce booth. Ross’s impassioned plea of “Will someone stop the damn match!” is just as memorable as either of Foley’s tumbles.


There are other matches improved by JR, of course. Foley v Triple H at Royal Rumble 2000, Austin v Rock at WrestleMania X7 (and indeed ‘Manias XV and XIX), Chris Jericho v Triple H from the April 17th RAW, Hulk Hogan v Shawn Michaels at SummerSlam ’05, the Batista v Triple H pay-per-view trilogy from 2005, Cactus Jack v Randy Orton at Backlash ’04, Shane McMahon’s hardcore title match with Steve Blackman, and even Kurt Angle’s main roster debut against Shawn Stasiak all benefited from Jim Ross’s involvement. I could go on. All were great matches to begin with, but JR’s skill calling them made them that little bit better.


What makes a good wrestling announcer is probably just as debatable as what makes a good wrestler. JR may not be everyone’s favourite commentator ever but I think anyone would be hard pushed to argue that he’s not amongst the best. He was an incredibly adept performer, just as comfortable calling a brutal TLC or Hell in a Cell match as he was contributing asides to a half hour long This Is Your Life comedy segment. When at the commentary desk JR could help to mask some of the shortcomings of less able wrestlers, an incredibly important knack for any commentator to have (it’s something Michael Cole still needs to improve), and explaining the story of a match with an air of good natured ease, arguably the chief role of a WWF and E commentator.


The more wrestling I watched the more commentators I was exposed to. Despite having a sizable commentary roster there was nobody in WCW who did such a great job as JR. It would be years before I noticed how good Ross was at his job, which is a sign in itself that he was talented. I noticed immediately how forced Tony Schiavone and his gang sounded. In ECW Joey Styles was great and for a while I was convinced he was the best wrestling commentator going. Looking back I realise that while he was good he was more technical. He could call wrestling moves and holds that JR wouldn’t have known the name of, true, but he wasn’t as gifted a storyteller as JR. Although in fairness that was slightly less a priority in ECW and Styles contributed to that product just as much as Ross did to the WWF. 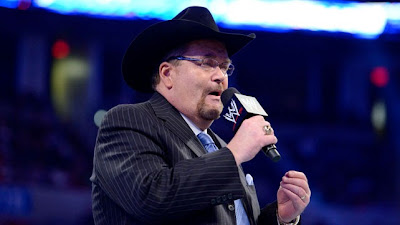 JR cutting a promo and rocking a beard
This is not to say that JR was perfect. It wasn’t unknown for him to miscall moves and he would routinely get basic things wrong, such as mixing up Matt and Jeff Hardy. But when it came to getting over the story of any given match, recapping ongoing plots, covering weakness, and hyping pay-per-views, there was nobody finer .


While commentary is the role for which JR will be most remembered it’s not the only job he held in the company. From the late 90s until the middle of the “naughties” Ross was the Fed’s head of talent relations. The duties linked to this job are many but the key aspects of it were hiring, firing and re-signing wrestlers to appear on WWE’s TV shows. As great and passionate as he was on and about the commentary role it was the talent relations job that allowed Ross to make his greatest contributions to the company. He played a part in signing names such as Steve Austin, Mick Foley, Eddie Guerrero, Chris Benoit, Batista, Randy Orton, CM Punk and John Cena. Considering the amount of money those men, and many others signed by JR, have made for WWE, and themselves by extension, over the years it’s hard not to see this as his greatest contribution to WWE.


That the men who succeeded Ross in both of his roles struggled to gain acceptance shows just what a great wrestling mind he was. Michael Cole was so unpopular when he first replaced JR on RAW that he ended up being turned heel. Over the last two years he’s gradually drifted back to a babyface approach and is proficient at his job, but I know of nobody who has the same affection for him that they have for JR. Part of that is perhaps the fact that the nature of the job has changed and is now as much about promoting Twitter as telling us someone’s applied an armbar.


Over in talent relations John Laurinaitis was a flop when he replaced Ross (after several years of training, it should be pointed out). The only major player he signed during his time in the role was Daniel Bryan and, by most accounts, he alienated himself from the roster. Ross benefited from being in a position to sign established grapplers like Foley, Austin and Punk, but he also signed guys who were unproven. He clearly had an eye for talent that Laurinaitis lacked.


There are plenty of rumours doing that rounds as to why JR left. They’re largely unimportant. The thing to focus on is that he’s leaving, ostensibly to spend more time with his family and work on his ever-growing range of BBQ products (sauce it!). While it’s always possible he’ll surface in WWE again sometime in the future it’s not likely to come soon, and his contributions will probably be far more sporadic if he does.


WWE isn’t going to fall apart without Jim Ross. But it will be a little worse off without his knowledge, passion and input. He’ll be missed, on screen and off.
Posted by Dave at 19:25