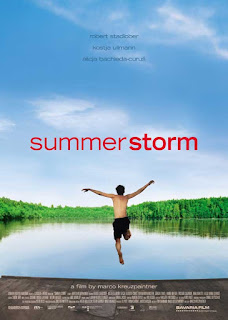 A few weeks ago I watched SummerSlam 2004 and tweeted about it. The only thing I initally remembered about the show was the main event in which Randy Orton won his first World Heavyweight championship. The rest of the card turned out to be a mostly pleasant experience. Booker T v John Cena, Triple H v Eugene and JBL v The Undertaker were all a bit of fun if you could look past their shortcomings (Cena's ropey wrestling, the offensiveness of the Eugene character, and JBL being in a WWE title match respectively) and the Intercontinental title three-way was good fun. Plus there was fun nonsense on offer from the Diva Dodgeball showdown (featuring a bunch of women you almost certainly don't remember or have never even heard of) and Matt Hardy v Kane for the right to marry Lita. Here's what I thought in tweet form...


Tweet 1: Watching SummerSlam 2004. I remember very little about this show other than the main event of young boy Randy Orton versus -REDACTED-.
Tweet 2: Opening package is highlighting how strange this is. Heavy on Teddy Long. Mid-card Cena. Kane v Matt Hardy for the right to marry Lita.
Tweet 3: Wall-to-wall nonsense by the looks of it. Excited for this show. No idea if this is good or a train wreck.
Tweet 4: 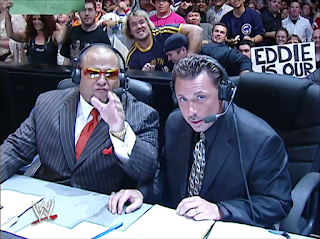 
Tweet 5: Dudleys in a six man opener. This is during that weird phase where Spike was heel and bossing Bubba and D-Von. Forgot all about this.
Tweet 6: "This is going to be a rough and rumble match-up" - Michael Cole on the Dudleys v Rey Mysterio, Billy Kidman and Paul London
Tweet 7: I like that quote. It's basically Cole saying the Dudleys are going to stiff some cruiserweights for lols.
Tweet 8: Spike Dudley there, spitting on Mexico's greatest legend Rey Mysterio.
Tweet 9: "I'll beat your face in!" - Bubba Dudley with the loudest spot call I've ever heard
Tweet 10: "Vintage Dudley Boys" - Michael Cole
Tweet 11: Mysterio v Spike in a cruiserweight exchange for the ages now. Still-good-Rey's fluidity against Spike's stomps. Gold.
Tweet 12: Just been reminded Kidman did a move called the BK bomb. Christ...
Tweet 13: Spike's better than I remember as a straight up wrestler. He doesn't really work as a heel though.


Till Death Do Us Part: Matt Hardy v Kane


Tweet 14: Till Death Do Us Part match. Ambrose and Rollins will get to this as their never-ending feud gets into more obscure stips.
Tweet 15: Recap of the Matt Hardy v Kane feud that would go on to secretly involve Edge in 2005. Loved this nonsense at the time.
Tweet 16: I'm not comfortable with Lita being so blatantly presented as a prop in this match. Or with the rape connotations, obviously.
Tweet 17: Typical that heel Lawler is bigging up Kane for impregnating Lita. I'm waiting for the unsavoury comments to start.
Tweet 18: Corporate Kane is way better than mid-00s baldy Kane. Not least because he acts like David Puddy.
Tweet 19: "I think Kane might make an alright husband" - Jerry Lawler on storyline rapist Kane
Tweet 20: They just did a nice choke slam off the ropes for the finish so at least the match ended well.
Tweet 21: Poor old Lita though. She's been married to Kane for ten and a half years now.
Tweet 22: 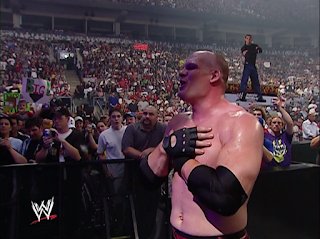 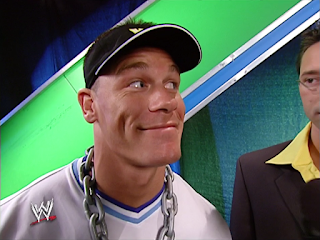 Tweet 25: Orton and Cena bickering backstage. Is the origin of their aeons-long feud?


Tweet 26: I'd forgotten all about Booker T and Cena having a best of five series too. I hadn't forgotten Cena's #BasicThuganomics intro theme though.
Tweet 27: I'm interested in this match. I want to see early Cena work and Booker's great. Good combo.
Tweet 28: Also it seems to be heel Booker. Second only to King Booker in the League of Bookers pantheon.
Tweet 29: "Shades of the great Iron Sheikh" - Michael Cole on a Booker T camel clutch
Tweet 30: Yeah. Cena's early work is, unsurprisingly, rough around the edges. He just did one of the worst small packages I've ever seen.
Tweet 31: Just remembered that there's a triple threat match on this show where Toronto turns heel and boos their hometown boy Edge.
Tweet 32: Cena wins lol.


Tweet 36: That was just a plug. We're getting Big Wave Batista v Edge v Jericho first. I bet this'll be a classic with Wave involved.
Tweet 37: This is back when Jericho was reasonably enjoyable. Never been a massive fan though tbh.
Tweet 38: "He's never met his father!" Steady on, JR.
Tweet 39: I like JR choosing to get Batista over by saying he could play in the NFL. Good one, Jim.
Tweet 40: The flaps of Edge's left boot have come loose. Technical wizard Wave Batista will target the boot and get a win via tapout.
Tweet 41: Speaking of Edge's boots, it looks like he has Shane Douglas's Franchise symbol on them. Probably some sort or rib masterminded by The Kliq.
Tweet 42: I'm a fan of Shane Douglas's career of poorly chosen shoot comments.
Tweet 43: That match was better than I half-remembered it. Amazed at how good Batista looked. 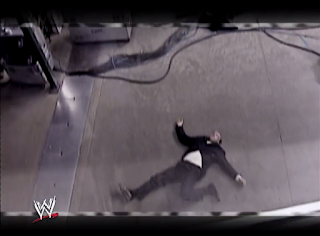 Tweet 47: Roman's long lost brother LUTHER REIGNS!
Tweet 48: Eddie's gimmick was basically that he was a great wrestler who loved stealing cars.
Tweet 49: Toronto, Canada getting behind wrestling's Captain America, Kurt Angle. Eddie's thievery has made him a pariah north of the border.
Tweet 50: Just noticed Baby Brian Hebner refereeing this match wearing his stupid blue trainers. Never been a fan of his work. He draws the eye.
Tweet 51: WWE missed a trick not releasing Pirates of the Caribbean-esque Luther Reigns earrings. #merch
Tweet 52: This is an odd match. Slow paced, based on the mat, and they're both using Angle's moves. It's not bad but it's not what I expected.
Tweet 53: I always find it weird when wrestlers take off their boot and use it to knock someone out.
Tweet 54: Because, y'know, when they kick it does minimal damage.
Tweet 55: Fun match. Probably match of the night considering there are Eugene and Johnny Layfield matches to come.


Tweet 56: Let's not forgot that Eugene was in Evolution with Playboy editor-era Triple H.
Tweet 57: "Eugene, I was NEVER your friend!" - Triple H, with the greatest heel promo of all time
Tweet 58: He followed up by near murdering his former Blue Bloods pal William Regal. This was powerful stuff.
Tweet 59: JR making the strong accusation that Triple H is guilty of conduct unbecoming of a RAW superstar. Serious business.
Tweet 60: Trips using Lilian Garcia, every man's weakness, as a foreign object there.
Tweet 61: Trips doing the Flair Flop better than Flair. Didn't even see the hands come up. Because he's a pro, dammit.
Tweet 62: Hilarious "Eugene sucks!" chant going on right now.
Tweet 63: I'm enjoying Triple H's general lack of selling here. It's refreshing. Don't get enough no-sells in 2015.
Tweet 64: Did Eugene ever give a reason for Tripper being his fave number one wrestler of all time? I'd be interested in his reasoning.
Tweet 65: Now's as good a time as any to mention that I never liked the Eugene character. It was poor taste. Not that WWE cares about taste.
Tweet 66: Eugene using all these moves he's "seen on television." What about those Don't Try This At Home ads, mate?
Tweet 67: Triple H kicking out of the leg drop as a big middle finger to Hogan there.
Tweet 68: Flair's been at ringside less than two minutes. He's already taken his jacket off and started throwing a fit.
Tweet 69: Triple H wins with the Pedigree. He probably got flack for that at the time. Makes sense though...
Tweet 70: He's a former world champion. Eugene should have lost. Plots he cheated to win. Eugene was protected and it was a memorable first defeat.


Tweet 71: Meanwhile, over in a high school gym, Jonathan 'Coach' Coachman is adjudicating Diva Dodgeball.
Tweet 72: No idea who most of the Diva Search lasses are. I recognise Mrs Michael Bennett, TNA announcer, and 'Taker wife but that's about it.
Tweet 73: This is a Divas division for workrate though. Trish, Jazz, Molly Holly, Victoria and Gail Kim are there. Plus Stacey Keibler.
Tweet 74: Amused by Coach's commentary.
Tweet 75: Also: NIDIA.
Tweet 76: I'd like Nidia to reappear on RAW in a backstage segment with Jamie Noble. Lols to he had there.
Tweet 77: Jerry Lawler offering to help restrain Trish Stratus. #stillgotit 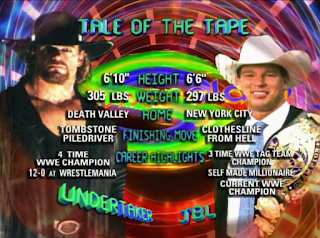 Tweet 79: I don't mind Undertaker or JBL but they did not work well together. Part of the problem was that nothing was made of their Ministry history.
Tweet 80: John Ladshaw Layfield.
Tweet 81: The mystique of that Undertaker entrance was slightly ruined by a guy in the front row give him double middle fingers.
Tweet 82: Only just now remembering Orlando Jordan's transformation from innocent young boy into sinister Chief of Staff, overseeing the Bashams.
Tweet 83: JBL running is one of the funniest things I've ever seen.
Tweet 84: Worth nothing that in August 2004 Mark Calaway looked more like Fake Undertaker than real Undertaker.
Tweet 85: It's like he's done himself up as an Undertaker parody.
Tweet 86: The crowd are doing a Mexican wave. 'Taker should use the dark arts to make them pay attention.
Tweet 87: This match isn't doing much for me but I can recognise they're doing good stuff. JBL taking a superplex, for example.
Tweet 88: Did this feud progress to JBL stealing Undertaker's urn? If not, why not?
Tweet 89: Great potential in a segment with JBL melting the urn down and turning it into a magical gold cowboy hat.
Tweet 90: Tazz is hyping boots. Might be at the bottom of the barrel here, folks.
Tweet 91: When selling, Nick Patrick looks like Johnny Vegas.
Tweet 92: Loads of interference and assorted shenanigans in that match. Makes the DQ ending a disappointment.
Tweet 93: Undertaker will get revenge by Tombstoning JBL's limo.
Tweet 94: Lol at 'Taker choke slamming JBL through the roof of the limo. Textbook mid-00s overkill.
Tweet 95: Even funnier is Jordan dragging JBL, who could have spinal injuries after being THROWN THROUGH A ROOF, out onto the concrete.
Tweet 96: EMTs coming out to help JBL. Remember when WWE introduced BB as an EMT?
Tweet 97: She lasted about three months, married 'Hard to the Core' Robert Holly, then was never heard from again.
Tweet 98: Maybe she'll turn up with Kayfabe Commentaries one day.


Tweet 99: Can Randall Keith Orton do it? Can he become the youngest ever world champion? Can he beat -REDACTED-? 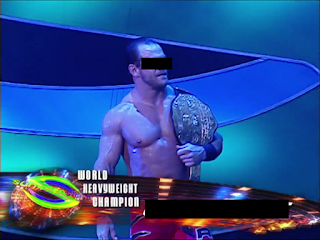 Tweet 100: Love WWE trolling the Canadian fans by having Earl Hebner ref this.
Tweet 101: Lawler pushing Orton as "a Greek god." It's possible he's being fed material by Vince.
Tweet 102: The crowd don't seem as into this as I'd thought they'd be. Silence for this -REDACTED- wrist lock, for example.
Tweet 103: Orton gets a shoulder block. Crowd explodes.
Tweet 104: More trolling with Orton slapping on a Sharpshooter. *slow clap*
Tweet 105: -REDACTED- with a sloppy reversal there. I don't think he's even Canadian. Real Canadians have perfected the Sharpshooter by age five.
Tweet 106: This isn't about -REDACTED-, Orton, or Orton's first world title. It's about Hebner earning forgiveness from Canada by officiating fairly.
Tweet 107: What was WWE's thinking for pulling the trigger on this Orton main event push? Was it just a case of "Welp, we need new guys"?
Tweet 108: It's taken a while but this match is hotting up. That's been a theme across this show tbh.
Tweet 109: Orton with a cross body, a move he once used as a finisher. Like a 1970s babyface.
Tweet 110: Love -REDACTED- foregoing the -REDACTED- Crossface and using the Sharpshooter because he's in Canada.
Tweet 111: Part of the reason this crowd's getting behind Orton is because he's being presented as a fiery babyface who won't give up.
Tweet 112: Knees up on that top rope headbutt. That may explain some things...
Tweet 113: "RKO outta nowhere! RKO outta nowhere!" - Jim Ross
Tweet 114: Orton should cry more often.
Tweet 115: The handshake that turned Randy Orton from a crying young boy into a #manly world champion. 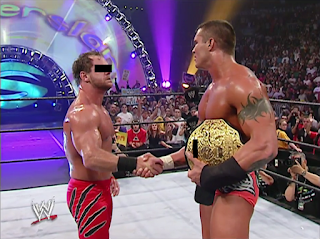