I've never been Mark Henry's biggest fan so under normal circumstances I wouldn't be too concerned that he’s suffered an injury. But that he's done his ankle in has actually come as a disappointment to me.


Before SummerSlam it was rumoured that Henners would team with old rival Big Show (remember that scintillating feud they had in 2011 that appeared on the two best pay-per-views of the year?) to challenge for the tag team titles. Despite champions Rollins and Reigns issuing an open challenge for any two men to step toward and face them, which certainly seemed like a strong indication of the match being planned, the bout never took place. The Shield, Henry and Show were relegated to ringside duties during the pre-show.


The rumours of the Show and Henry union were proven true on the following evening's RAW. 'The Giant' told Renee Young that he and Henry were teaming up to chase the tag titles. But that never happened. Show instead got dragged into the Triple H megalomania saga. That may have been the plan all along or it could be that plans of the comic book style team-up were altered because someone decided Show and Henry would be better off doing other things. We'll never know. 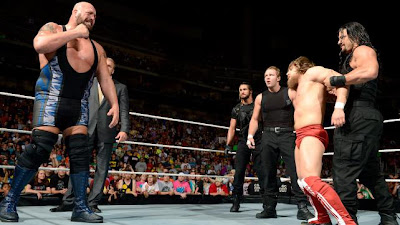 This is what Show's been up to instead of teaming with Mark Henry
Whatever the case I think we've been robbed of a great team. Neither is the greatest singles wrestler on the roster but I think they could have been pretty enjoyable as a unit. Limited guys, which both men are as far as match quality goes, tend to work better as teams. Coupled with their general improvement over the last two years, very solid characters, and the fact that they're both large even by WWE standards and I think they could have seen increased popularity together. The poor reputation of the division would have helped them too.


They'd have made very good opponents for The Shield. Their power would have provided a nice balance to the teamwork of The Shield, which has been one of the key parts of their act since being introduced. It would have been interesting to see two larger guys working as fan favourites against smaller heels. Their matches would have had a very interesting dynamic.


The doubles scene could have been enlivened by a couple of title changes stretched out over a couple of months, particularly if they’d been granted stipulation matches to work with. Dean Ambrose and his various singles feuds could have helped keep the rivalry alive with six man tag matches too, and other units could have slipped in and out of the feud for multi-team matches. In short, it was a very promising scenario.


Mark Henry’s ankle injury couldn’t have come at a worse time. But then it’s Mark Henry. Getting injured is “what he does”.
Posted by Dave at 20:08