Gabe Sapolsky Versus Ring of Honor

Usually a hot feud is a good thing for a wrestling company. But they usually take place in the ring as part of the scripted show. When feuds take place in the back, behind closed doors, they’re usually detrimental to the product. Take, for example, the Shawn Michaels and Bret Hart rivalry from the nineties. They had some good matches opposite one another, but imagine how great things could have been had they gotten along and been willing to do things properly, instead of having an unprofessional and childish point scoring, tit-for-tat feud.


A more recent example (and the one that forms the basis of this post) is the ongoing rivalry between Gabe Sapolsky and his former employer Ring of Honor. Gabe was released from booking duties by ROH in late October 2008 and has gone out of his way to take digs and swipes at the promotion, on and off, ever since. ROH staff have always refrained from commenting on Gabe’s career and comments made since the firing.


Gabe’s most famed outburst came after ROH was bought by SBG and they suffered a number of iPPV broadcast problems. Gabe’s point was that Ring of Honor, being owned by a television production company, was well placed to avoid broadcasting issues. He was absolutely right. But when making the point he couldn’t help but come across as a bitter ex-employee, approaching the subject with a tenacity that a neutral bystander would have had no need for. It didn’t help that he never explicitly stated he was talking about ROH. That only served to make him come across as passive aggressive.


It’s unknown whether anyone in ROH still harbours ill will towards the Gabester because, as already mentioned, nobody from the promotion ever comments on him. Which is the professional way of doing things. Personally I think ROH made the wrong call firing Gabe in 2008. They should have told him to take a year off to refresh himself. But that doesn’t mean they were wrong. People get sacked, and Gabe seems unable to come to terms with Ring of Honor letting him go. 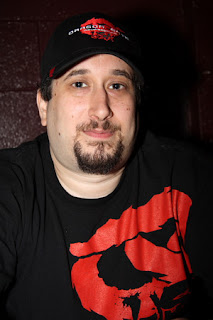 Gabe wearing some subtle merch
If the hatchet were to be buried both Ring of Honor and Gabe’s Dragon Gate USA and EVOLVE promotions would benefit. This would require work on both sides. Gabe may be the more outspoken of the two parties and have a clearer reason to carry the nonsense on but there must be a reason the animosity is still so raw. It takes two to keep something like this running for so long.


At the moment guys wanting to work for either ROH or Dragon Gate and EVOLVE must make a choice and sign with one or the other. If they do appear for the rival organisation clauses in their contract prevent them from working broadcast matches. This means that an ROH guy can appear for Dragon Gate, but ROH has to okay it and the match must be a dark match. Which is great for fans attending the events in question but an irritation for anyone watching at home or buying the DVDs because they miss the appearance of a big star. It’s an annoyance for the companies too, as it limits their selling and marketing options.


An end to the Sapolsky v Ring of Honor hostilities could bring a much needed freshness to the US wrestling scene. With guys not being forced to pick where they have to work a plethora of fresh matches would be opened up.


The Young Bucks are the obvious names to mention here. They got released by ROH as a cost-cutting measure during the summer of 2012, along with TJ Perkins. They’ve since appeared for Dragon Gate and EVOLVE and doubtless helped to improve the product. They probably hold somewhat of a grudge against Ring of Honor themselves, and I don’t blame them if they do, but I’m sure they’d give a return a try for the right amount of cash. The Bucks against reDRagon, the Wolves, C&C, and ACH and Tadarius Thomas would all be solid matches that could help ROH to flog DVDs and iPPVs.


The likes of Johnny Gragano, Chuck Taylor, Sami Callihan, Ricochet, and Samuray Del Sol could all make a similarly exciting impact on the Honor roster. Going the other way I’m sure Gabe would love to work with the Briscoes, Davey Richards, Eddie Edwards, Michael Elgin, and Roderick Strong. He may even be willing to admit that Kevin Steen is a guy worthy of wrestling regular main events now, what with Steen having carved out a headline niche for himself in ROH and all. Considering the history Kyle O’Reilly and Bobby Fish have with Dragon Gate and EVOLVE I think reDRagon would be an interesting combo to give Gabe access to as well. 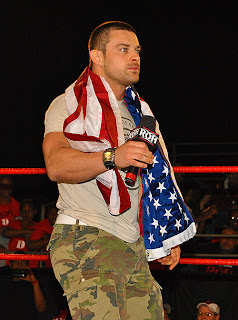 One of the many guys I'd like to see cross over
It doesn’t even have to be an overt feud or storyline or anything. It could simply be a working arrangement that lets the wrestlers appear for the other company when they’re not booked with their home promotion. A simple announcement on the relevant websites would be enough to get things rolling.


This isn’t to say that a Ring of Honor versus Dragon Gate programme wouldn’t be nice to see. Booked right I think that could improve iPPV business and live attendance for both groups. The DG USA roster would also benefit from the exposure of ROH’s TV output.


It’s a pipe dream of course. Part of the reason ROH are currently running a SCUM invasion storyline is that it’s a way of presenting an inter-company angle without needing to cooperate with another company. SCUM’s roster contains just enough guys to make it come across as a separate roster. They don’t need Dragon Gate for this story right now. That’s not to say they couldn’t arrange something for a year or two in the future. Getting a working relationship up and running would actually increase the chances of that by establishing a status quo and allowing the feud to develop naturally.


The indy scene simply doesn’t have a deep enough talent roster to sustain this sort of divide indefinitely. Sooner or later something is going to have to change. That’s either going to be the working relationship (which would be best for everyone, especially paying customers), one of the leagues ceasing to exist, or one gradually signing a larger portion of the top talent, leaving the other to struggle on with mid-card level guys in top slots.


While they’re at it ROH should try sorting out their problems with Low Ki. Nah… one thing at a time.
Posted by Dave at 17:49