The Man Without a Feud

When Dolph Ziggler won the World Heavyweight championship on the April 8th edition of Monday Night RAW it felt like the beginning of something special. Ziggler had been growing in fan estimations for years and had long been expected to become a world champion sooner or later. Years of support from fans and hard work from Ziggler had paid off. At least, that’s how it felt.


An errant kick from Jack Swagger changed whatever original plans lay in place. Suffering a concussion, ‘The Heel’ was pulled from his scheduled triple threat ladder match against Swags and former WHC Alberto Del Rio at Extreme Rules. Instead Swagger and ADR clashed in a submission match for the right to tangle with Ziggler once he’d returned from the injured list.


That happened in time for Payback, WWE’s next major supershow. In his first title defence Ziggler entered a cracking performance opposite ‘The Essence of Excellence’. They wrestled one of the best matches of the year and executed a silky smooth double turn in the process. Ziggler, the man who had won over fans with his big bumping style and cocky attitude, was turned face as Del Rio maliciously and aggressively targeted his head, making the most of the champ’s recent concussion problems. It was a clever storyline that did a lot for the characters of both.


The two had a barnstorming rematch at Money in the Bank. The two seemed (and still do, in fact) incapable of having a bad match together. Sadly, this would not be ‘The Show Off’s’ night. He lost again, though this time it was a result of unwanted interference from then-beau AJ Lee.


With that DQ finish Ziggler left the World Heavyweight title’s orbit. Del Rio would head off into a thoroughly forgettable one month time-killing run with Christian and Dolph would get involved in a programme with his former bodyguard Big E Langston, who was still linked (thoroughly unromantically it should be stressed) to Ms Lee.


At SummerSlam Dolph Ziggler and Kaitlyn, who’d had her own problems with AJ, teamed to defeat Big E and AJ in a mixed tag team. It was an enjoyable enough match considering the slight amount of time they were allotted and it felt like a satisfying conclusion to months’ worth of storylines. All four made the best of the situation.


Things should have been different. The Del Rio v Ziggler rivalry had enough left in it to carry on one final month to ‘The Hottest Show of the Summer’. A split in the Big E-AJ-Ziggler camp would have felt more impactful on the bigger show. Ricardo could still have been written out of the picture after a Del Rio Fit of Rage™, which could have been used to convince people they’d see a fair fight at SummerSlam. AJ costing Ziggler the championship in that situation would have made even more sense, because Ricardo wouldn’t have been around to do it.


Nobody involved in Ziggler v Del Rio went on to immediately do anything better so why couldn’t it last until SummerSlam? It makes no sense.


Everyone except Dolph has moved on to pastures new since SummerSlam. Rodriguez has returned to TV and become embroiled in a feud with his former boss, using Rob Van Dam as his proxy. AJ Lee recently cut an incredibly good promo about the state of the Divas division, which hints that her next task will be making it mean something again. Big E will either stay by her side or break off on his own for a spot of mid-card action before having a main event push activated for him some time next year. Kaitlyn’s not been seen, but she will likely feature in the Divas division. 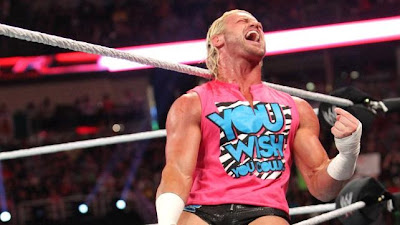 He may not be doing anything interesting but he's still got a nice looking T-shirt on sale
Ziggler is the odd man out here. The night after SummerSlam his bumping skills were put to use reinvigorating The Shield. Last week’s RAW saw him without a match. He was relegated to standing atop the entrance ramp refusing to comment on Triple H’s booking decisions. He is a man without a feud just a month and a half after looking like a certain headline success.


If you were feeling charitable you could mention WWE is doing a great job at elevating Daniel Bryan into a leading man. Which is entirely true. But that doesn’t mean they can’t also pay attention to Ziggler. They couldn’t both be presented as the next major star, but there’s nothing to stop the company giving Ziggler something meaningful to do and capitalising on the progress he’s made this year.


Perhaps the beating he took at the hands of ‘The Hounds of Justice’ last week will lead to a US title match with Ambrose at Night of Champions. That would be a potential show stealer, but it’s not a match I’d want to see Ziggler win. The mid-card title would be a step back at this point.


It’s possible Ziggy will be the man who puts a stop to Ryback’s recent reign of terror in backstage segments. We’ve seen Ryback v Ziggler before, but not since both men have switched heel-face allegiances. Dolph’s big bumps are tailor made for playing the good guy. I think a heel ‘Human Wrecking Ball’ against a babyface Ziggler could be excellent. Failing that I’m sure Ziggler could do something interesting with the Wyatt Family, although they’re so popular that it could see Ziggler getting booed.


I’d much rather see Ziggler refocus on the World Heavyweight championship than anything else. Moving back into his programme with Del Rio would be good for both men. They have great chemistry and their series ended prematurely. They’ve definitely got a pay-per-view clash or two left in them.
Posted by Dave at 12:12