Have you noticed the trend that’s hit wrestling promos this year? Wrestlers have begun introducing themselves, saying their name at the start of a promo. Two guys who are especially guilty of this are Bully Ray and Paul Heyman. But there are others like Randy Orton and Triple H. With names like these doing it it will quickly become the industry standard.

It could be considered a good thing for new viewers. If you’re tuning in for the first time I imagine it’s helpful to have the name of someone talking being flagged up. It helps the programme appear a little more accessible and logical. And, being a regular viewer, I think I forget a lot of the time how baffling wrestling (particularly WWE or TNA) could appear to someone getting their first taste.
That said it’s not like the names of wrestlers are kept a secret. A graphic appears when they walk to the ring. That gives us their name and, where applicable, their Twitter address. Not only that but the commentary team will more than likely mention the guy’s (or gal’s) name as the saunter to the ring. They have to fill that air time somehow.
So we have a situation where regular viewers will know who the person cutting the promo is without even thinking about it and new viewers having a couple of different methods of discovering who the silver tongued stranger is. So really the only time the in-ring intro is useful is when someone new tunes in just after the wrestler in question has walked out but just before they start talking.
One word: niche.
All this said I find it hard to completely hate the approach. On some level it’s amusing. Heyman seems to do it to get heat, which is fine. It’s an extra sentence with which to get his New York accent across. That being one of his chief tools for turning audiences against him it’s hard to deny it’s a good thing for him to be doing. 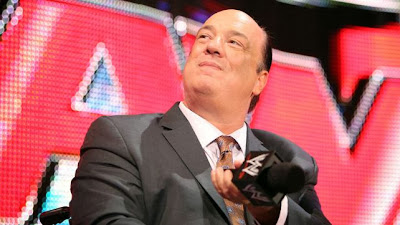 Ladies and gentlemen, his name is Paul Heyman
Everyone else though? Bully Ray is much like Heyman with regards to deploying his NYC accent, but it’s harder to accept from him somehow. It’s completely ridiculous when Triple H does it because it’s clearly just an excuse to remind us all that he’s the storyline COO. And Orton? He’s doing it because he’s regressed so much with his verbal dexterity that he no longer remembers how to cut an effective promo.
The more guys at this level do it the more it will be emulated elsewhere. That’s a problem. It’s easy enough to overlook now but when everyone’s doing it it’s going to become unbearable.
Posted by Dave at 22:00