Monday's RAW saw Daniel Bryan stripped of the WWE championship. For anyone who'd seen Night of Champions the evening before this failed to come as a surprise. That show had ended with Bryan dropping Orton with his knee strike finisher and referee Scott Armstrong counting a distinctly fast three count.


It was clear from that that something was going to happen on RAW regarding Bryan's status as WWE champion. Something turned out to be the stripping. Triple H interrupted the new champ’s celebratory yesfest during the opening segment and called out Armstrong to check out some footage of him counting to three. Once it was established that he had indeed counted a little faster than usual he muttered to Bryan that they’d been had.


Bryan asked what he was talking about and it was immediately clear that Triple H, living up to his ‘Cerebral Assassin’ moniker had set Bryan up. Orty joined them in the ring and ended up laying Bryan out so Tripper could regain the title belt. 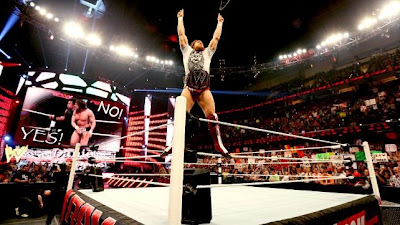 The champ is here! Yes! Yes! Yes! etc.
The short reign Bryan had at SummerSlam was not harmful to him. It portrayed him as being a worthy headliner. He defeated John Cena clean and was only defeated by Randy Orton because of a surprise Pedigree from Triple H. The combination of the unexpected finisher and the gruelling encounter with Cena is what put him down at SummerSlam. The loss of was presented as, in wrestling parlance, a screw job. It set him up to chase Randy for the championship, the assumption being that he would eventually defeat him for the feel good victory (and the title).


What we have instead is WWE's hottest star having won the WWE championship twice in under a month with both reigns combined lasting under twenty-four hours. There's obviously a plan in place here but right now it's tough to see what it is. I understand WWE want to crank up the sympathy for Bryan and to a certain extent the approach they're using will achieve that. But I can't help but feel that too much of this will cause fans to feel they can't put their trust in Bryan. If every time he wins the title he loses it very shortly afterwards people will simply begin predicting the losses and stop caring.


We're not at that point yet. With the title vacated it looks as though it'll be a while before Bryan's in a position to be one a three time champ. If and when that happens I think Bryan will get the lengthy title reign he deserves.


For the record the reason the McMahons gave for not returning the title to Orton was that he’s lost his edge. Stephanie specifically told him that she wants the man who handcuffed Trips and gave her a DDT. Her reasoning for wanting this was (completely unsurprisingly) not stated.


The only other notable occurrence from RAW was a passionate promo from Dusty Rhodes. He talked about going down the wrong in life and being unable to pay bills and mortgages (and, strangely for a man who’s theme song declares him to be “just a common man”, being unable to pay for people to come and cut the lawn). It was, of course, about Cody being fired. Dusty wanted him rehired.


Steph hit the ring with her catchy R’n’B theme music and offered Dusty exactly that but also threw in the option of having Goldust rehired. She actually said there was only one open spot. Remember that as newcomers continue debuting on the main roster in the coming months.


Dusty refused to choose. His reasoning was that as a parent he couldn’t pick one son over another. This resulted in The Shield storming the ring and Big Show being summoned by Steph. ‘The Dream’ was then given a second choice: a beating from The Shield or a KO punch from ‘The World’s Largest Athlete’. Dusty refused to pick so Show was ordered to do the deed.


That didn’t happen so Steph ordered The Shield to dish out some hurt. Show yelled at them not to. Reigns evened the score with chairs so Show ended up launching his WMD fist at Dusty anyway (Dusty swayed after absorbing the blow instead of doing what everyone else does and simply falling flat, which allowed Show to catch him). Rhodes did a stretcher job. 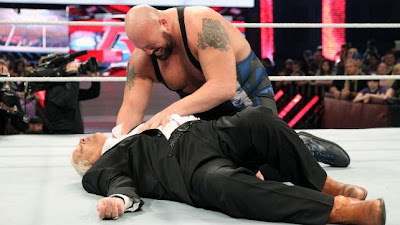 Big Show sobs after accidentally killing Dusty Rhodes
It was a bit long-winded but it got the job done. Steph looks like a callous ice queen and we were all reminded that Cody Rhodes exists. Plus they managed to keep Big Show’s story going. Not bad. It’s just a shame so much else on the show was filler.
Posted by Dave at 20:22