Today marks eleven years since the World Heavyweight championship was introduced to WWE. It was very much a creation of its time. The company was sticking (fairly) rigidly to its duel roster initiative with the WWE championship having been defended on both shows by whoever held it (names as varied as The Rock, Undertaker and Hulk Hogan). When Brock Lesnar defeated The Rock at SummerSlam that changed.


In what was a fairly surprising development at the time we got a storyline in which Lesnar signed an "exclusive" deal with SmackDown (general managed by Stephanie McMahon, fact fans!). That left RAW without a world championship, leading GM Eric Bischoff (now of, snigger, TNA fame) to dig out the World Heavyweight championship belt made famous by WCW. It had been unified with the WWE championship at the end of the previous year but that was downplayed. Presumably WWE didn't want to confuse an already fairly convoluted chain of events.


There was no tournament to crown a new champion. There wasn't a match of any sort, in fact. Triple H was awarded the title by Bisch, which naturally prompted some always popular turnbuckle posing from the new champ.


To be fair there was a logical storyline reason for 'The Cerebral Assassin' being awarded the strap. He had beaten The Undertaker in a number one contenders match on the previous week's show. The idea was that as Lesnar had signed a SmackDown-only contract and made himself unavailable to defences on the red brand he had essentially forfeited his claim to being recognised as the champion. As Triple H and proven himself worthy of a title match he essentially got the new title via forfeit. It wasn't the standard WWE storyline and that helped it stand out. It also gave the newly created world crown a much needed feeling of legitimacy.


It's important to note that the title was stated to be starting a new lineage. It just happened to be represented by an established, and pretty iconic, design. It was explicitly not a continuation of the WCW championship line under a new name, which meant it had no links to that promotion and no more links to the NWA championship and the Hackenschmidt and Gotch world title(s) than did the WWE championship. 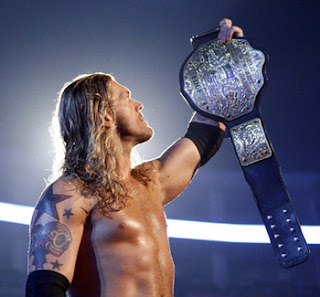 I'm an Edge fan. This is as good an opportunity as any to post a picture of him
That changed over the years. Nowadays you will often hear JBL hammering away on commentary about how the WHC's history can be traced back for over a century. It's broadly true because it spun off from the WWE championship which in turn span off from the NWA championship. But that the WWE title's links to the past are never mentioned (beyond its own impressive fifty year history) is peculiar. It strikes me that WWE wishes to acknowledge a lengthy heritage in the WHC while at the same time not denigrating their top title by linking it to any other. The WWE championship is too important for the promotion to routinely acknowledge it span off from another belt, especially another belt that is these days held by the likes of Rob Conway. The World title, on the other hand, gains credibility, in theory, with these links to the past.


The whole thing's an exercise in pointlessly but that's WWE. It's par for the course.


The passage of time has also seen the World Heavyweight championship's importance dwindle. In its first few years it was presented and perceived by most as having more or less equal standing to the older strap. At certain points it could even be said it was the company's leading title. While JBL was enjoying a ten month reign as WWE champion the WHC was being held by Triple H. No matter what your feelings on these two performers it's tough to argue that 'The Game' was not a more credible figurehead than John Bradshaw Layfield.


At some point the title settled into the number two position. It's difficult to say exactly when this happened. It could be argued that the last reign John Cena, the top man in the company, had was the last time the title was equal to the WWE title. That Cena hasn't bothered with it since, focusing instead on the more historic belt, has portrayed it as second best, something Cena sees as beneath him. It could be argued that Edge's final reign in 2011 marked the end of the title's glory days as he'd been the headliner most associated with the prize. The Punk v Hardy or Christian v Orton feuds could be pointed to as incredible feuds for the title that signify its last moment of true significance. It could have been Triple H's merging of the rosters in 2011 that was the WHC's last hurrah.


Whenever it was the moment has been and gone and the title is now considered the second tier "workhorse" title. Basically it's taken the spot traditionally held by the Intercontinental title. No one but the title's most ardent supporter would argue that it's still true world championship. It's certainly a championship with a rich history in its own right. It's been held by greats like The Undertaker, Edge, Batista and Triple H and super workers like Christian, Del Rio and Ziggler. It's a championship that can be respected, whether it's second best or not.
Posted by Dave at 23:51