This week those smaller feuds included the Usos dispute with The Real Americans. There was no pre-match promo from Zebedee this week, his role was reduced to a mere utterance of “We the people!” before the match. That allowed the focus to be firmly on the wrestling between the four men. Predictably, considering Cesaro’s involvement, it was a worthwhile match. The feud’s not going to be remembered as anyone’s favourite but it’s giving Jimmy and Jey something to do, rehabilitating Swagger, and keeping Cesaro simmering away before the inevitable push up the card comes his way. 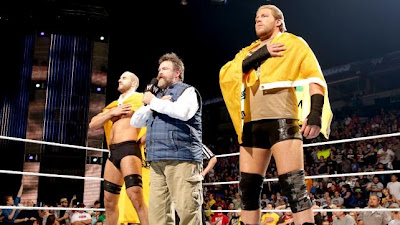 The obvious question is why such a clearly nationalist team don't wear red, white and blue ring gear
The other undercard performers dealt some time were the Divas. A backstage segment showed AJ Lee rallying fellow non-Total Divas Layla, Alicia and Aksana to her cause. Later she led them to the ring to interfere in a Brie Bella v Naomi the Funkadactyl match. The point here seemed to be that the ladies excluded from the Total Divas cast want to reclaim the spotlight and the division from those who have.


Bringing Layla and company into the programme as AJ’s allies (perhaps lackeys would be a better term) is a good move. It’s created two broad factions that can be pitted against each other in a wide variety of singles, tag and six (wo)man outings. The majority of the matches on offer will be basic but the factions will allow for other women to be installed at ringside, providing distractions and generally helping to cover up the fact that the matches aren’t especially great. It’s a promising sign.


A vignette featuring Bray Wyatt existed to remind us that Kane is still missing (he’s off filming sure-to-be-smash-hit See No Evil 2) and that the Wyatt Family are responsible. I’m a little disappointed their role has been diminished so soon after their debut. They had been doing incredibly well. They should be moved into a meaningful rivalry as soon as possible. The Prime Time Players would be good candidates.


A good job was done of continuing the Heyman and CM Punk dispute, surprising when you consider that Punk wasn’t on the show. Axel was placed into a non-title match with Kofi Kingston and they were given time to construct a fun match. The contribution to the Punk feud came in Axel taking a loss. That’s nothing new for mid-card champions in WWE but here it came from a rollup and was played as something that could happen at Night of Champions, which would lead to ‘The Second City Saint’ getting his hands on Heyman. For once a champ losing a non-title match made sense! 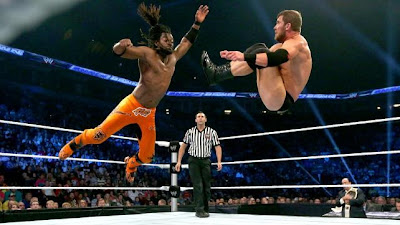 Looks like Kofi's about to hit some trouble
The other three matches that took place all came from the opening segment. Triple H addressed the entire roster (minus those who were off at a RAW show). Worth noting was that Alberto Del Rio and Dolph Ziggler were stood right next to each other and showed no signs of animosity despite having been in a heated rivalry less than two months before.


This scene differed from others in having an open mic for the roster to get involved. ‘The Game’ encouraged the employees to open up to him and tell him how they were feeling so that he could perform his job better (he’s head of talent relations, ‘member?). After Damien Sandow had piped up in favour of the Cody Rhodes firing Rob Van Dam and Kofi Kingston both spoke about the negative feeling hanging over the locker-room. Heath Slater and Ryback both joined in, the former speaking out against Big Show’s sombre attitude and allegedly unpredictability and the latter saying he was tired of being called a bully.


From all of this H Treble dished out the Kingston v Axel match, a Big Show v 3MB handicap affair, Ryback v Dolph Ziggler, and Rob Van Dam v Randy Orton (begging the question about how he was planning to fill air time before this segment). He also announced Daniel Bryan would be allowed to wrestle any member of The Shield (who were performing their now standard duty of standing in the aisle) he wished. Bryan would end up passing the decision on who’d face him over to ‘The Hounds of Justice’.


Orty dropped RVD following his vintage DDT from the apron to the floor and an RKO back in the ring. Alberto Del Rio then jumped ‘The Whole F’n Show’ and applied the cross arm breaker. ‘The Big Guy’ beat Ziggler after Dean Ambrose provided a distraction. Big Show mauled 3MB, to the surprise of nobody. 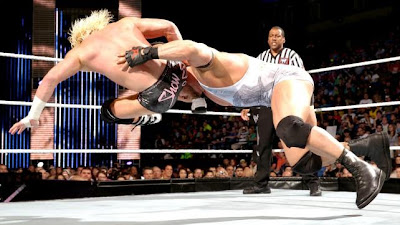 'The Big Guy' takes a Fameasser
In the main event Daniel Bryan faced Seth Rollins. The bout saw plenty of outside interference from the other ‘Hounds of Justice’ and was as good as you’d expect. There’s a reason Rollins tends to be the man selected to work opposite Bryan: the two have years of experience working against one another and have a very good rapport. The idea was once again to show that Bryan won’t back down or give up and can overcome long odds. He obtained the victory with his new running knee finisher.


Following the match Bryan yessed himself senseless on the entrance ramp and hit in the back of the head by Randall Keith Orton, world champion and Face of WWE. That got some heat and the show went off the air with the crowd chanting that the champ sucks. That no crowd sweetening effects had to be used during the closing seconds of the show (which has been the norm on SmackDown for years) should be taken as a sign that WWE is doing a good job establishing Bryan as a top guy and that audiences have taken to ‘The Viper’ as lead villain.
Posted by Dave at 09:39