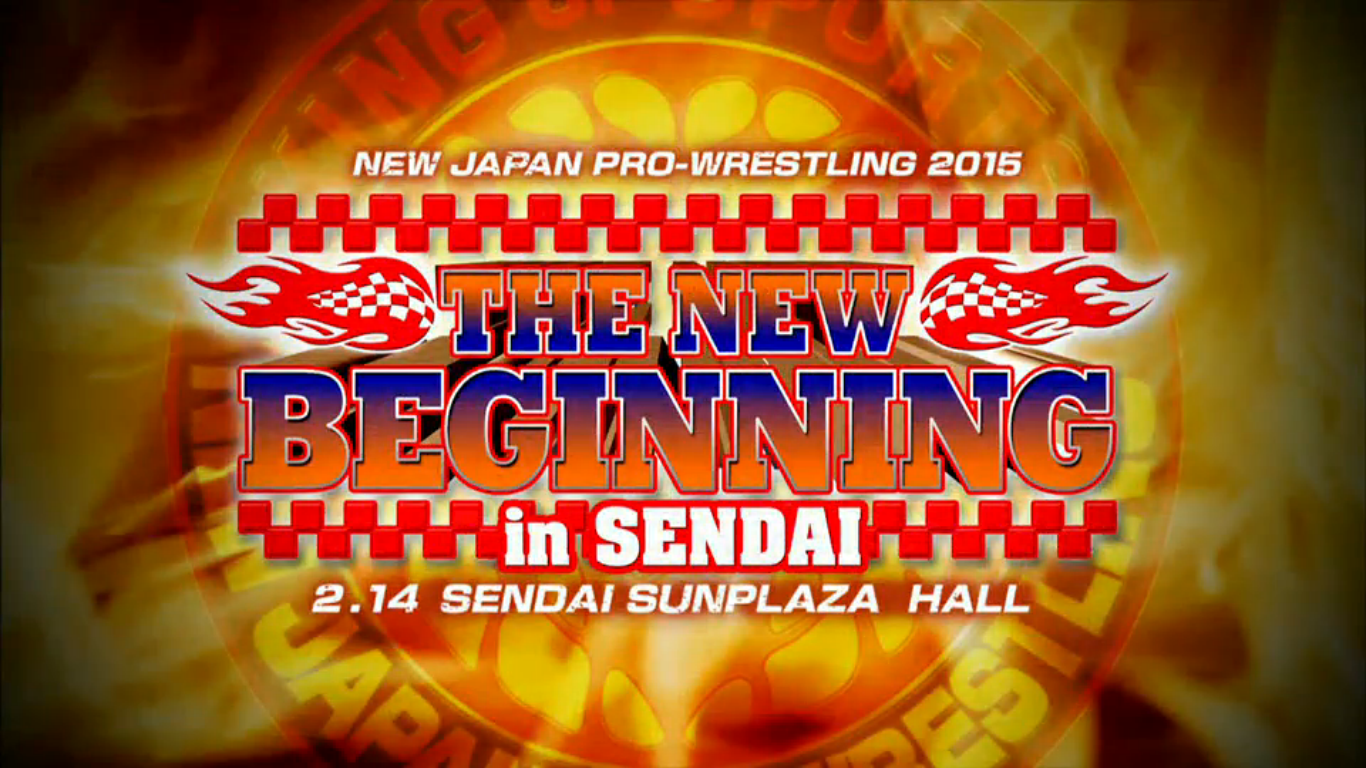 Three days after the opening half of New Beginning took place in Osaka the New Japan crew hit Sendai for the closing half. I say the New Japan crew but new IWGP champ AJ Styles was noticeable by his absence from this card. A peculiar booking decision, but not a catastrophic one as there was already a strong main event announced in Nakamura versus Nagata. In fact it's possible that relegating Styles to a tag match days after his big win would have lessened the impact of the title change.


The show kicked off with a pair of tag matches. Captain New Japan and Manabu Nakanishi defeated Satoshi Kojima and Yohei Komatsu in an average opener when Nakanishi hit an inverted TKO on Komatsu. That was followed by reDRagon taking on Jay White and a Tiger Mask. They won a ten minute match after they hit Chasing the Dragon on White. It was a surprisingly competitive bout considering Fish and O'Reilly's status as former tag champs and White's status as a young boy. I suppose it can be attributed to veteran Tiger Mask's involvement. For the record he was off whatever remains of his game here. There was a lot of sloppiness from him.


A six man tag match tying into the Osaka show's junior title matches followed that. The Time Splitters teamed with Máscara Dorada to take on the Young Bucks, whom the Splitters had faced in Osaka, and Kenny Omega, who'd been confronted by Dorada after his successful defence against Taguchi in Osaka. All the junior champions on one side of the ring with leading challengers on the other. The match was great, especially considering how low down the running order it was. The match culminated with Dorada hitting Omega with a sunset bomb off the apron before the Bullet Club members hit stero Indy-Takers on the Time Splitters, only for Omega to be pinned off a sunset flip from Dorada moments later. The result was predictable considering the confrontation on the previous show.


Match four saw Chase Owens unsuccessfully challenge Jushin Liger for the frankly meaningless NWA junior heavyweight championship. Bruce Tharpe was again at ringside and was again dressed like a game show host. The match was perfectly adequate but unmemorable. Liger got the best of a brisk sequence of rollups to retain.


Tharpe would return to ringside after Liger had cut a post-match promo. About stuff, I guess. This time he was managing NWA world heavyweight champion Rob Conway in his defence against Hiroyoshi Tenzan. Conway would lose the world's most prestigious indy belt when Tenzan hit a top rope moonsault. The match featured an abundance of manager interference, belt shots and various other heel shenanigans. It wasn't bad but it stood out in comparison to much of the rest of the card.


Following an intermission, in which Yuji Nagata chatted to a young lad in a dapper suit while drinking beer and shilling merch, the show resumed with Kota Ibushi and Tetsuya Naito v Kazushi Sakuraba and Toru Yano. The former struck me as an interesting pairing, both guys being names who've been singled out as prospective headliners. Yano and Sakuraba were the aggressors, isolating Naito and working him over before he managed to tag out to Ibushi. Naito would get the win for his team when he halted a Yano rollup mid-way through. Good match but not especially memorable.


Kazuchika Okada and Yoshi-Hashi defeated Bad Luck Fale and Yujiro Takahashi when Okada floored Takahashi with a drop kick and a Rainmaker. The crowd was invested in the match thanks to Okada's status as a top guy and the fact that Fale's been successfully established as a dominating monster. It speaks to the importance of characters in wrestling. More specifically it speaks to the fantastic job Gedo and Jado have done building Okada up as a somebody since he returned from his sojourn to the US.


The evening's second and final six man tag team match saw former tag champs Hirooki Goto and Katsuyori Shibata team with former seven time heavyweight champ Hiroshi Tanahashi to defeat Bullet Club members Doc Gallows, Karl Anderson and Tama Tonga (who were all sporting KISS face paint). It was very different to the junior six man that had taken place earlier on the show but was just as good. Tanahashi was worked over before making finally dodging an Anderson charge and tagging out to Goto. The Meiyu Tag boys took it to Bullet Club from there before Tana came back in to throw Tama Tonga around. He would again find himself isolated and triple teamed before Goto and Shibata made the save on a cover and brawled to the outside with Gallows and Anderson. Tama Tonga soon found himself on the wrong end of a sling blade and a High Fly Flow, ending the match just after the twelve minute mark.


The evening's penultimate match was held to crown a new NEVER openweight champion. Togi Makabe had won the title at Wrestle Kingdom 9 and contracted influenza a month later. The decision was made to strip him of the title and crown a new champion. Sentimental favourite Tomoaki Honma and former champion Tomohiro Ishii were chosen as the men who'd battle for the vacant gold.


Within minutes the two were throwing out stiff elbows. Ishii would gradually gain the advantage, wearing down Honma with alternating elbows and chops in the corner. Honma willed himself back into the fight and the pair engaged a lengthy exchange of chops. Honma got the better of it after a slow start, the audience applauding loudly when he finally sent Ishii down to the mat and hit his falling head butt.


Honma hit a Blockbuster before Ishii took control again. Honma survived a power bomb and a second rope stalling suplex, bringing the crowd to life. His reversal of a clothesline into a DDT was sold expertly by Ishii, the audience sensing that it was Honma's opportunity to take control and win. They ran into one another with clotheslines and took turns to fall and get straight back up but it was Honma who got the best of the exchange, flooring Ishii with a lariat.


Ishii returned to his feet on the apron. He was lariated to the floor and hit with a ridiculously dangerous head butt from the top rope to the outside. Back in the ring Honma turned a staggered Ishii upside down with a lariat. Despite all the damage he'd taken 'The Stone Pitbull' was able to return to his feet and drop Honma with a belly-to-back suplex. Honma fired off elbows but that only fired Ishii up, leading him to lamp Honma hard and hit him a stalling superplex.


Honma kicked out of that and was pulled to his feet. He was struck with three clotheslines and slumped down to the mat where he again kicked out of a cover at two. Ishii tried suplexing him but Honma sprang away into the ropes, coming back with a head butt. When he dropped Ishii with a deadlift brainbuster moments later the audience seemed convinced the match was over.


It wasn't. Ishii kicked out. He was pulled to his feet and given another head butt and a fire thunder driver for another two count. Honma went for more head butts, aiming for Ishii's injured shoulder. He got the first but Ishii avoided the second. Honma got straight back up after taking a German suplex and kicked out at one after an enziguri. Not to be outdone Ishii did his own kick out at one following a lariat.


Going back to the start of the match the two exchanged strikes and slaps. Ishii got a two count following a big lariat. Honma escaped a suplex but was staggered by a head butt, dodging a second before dishing out head butts of his own. Honma again kicked out but he couldn't survive a stalling brainbuster. That finally put him down for a three count and earned Ishii his third NEVER championship reign. It was the match of the night.


That left only the main event: Yuji Nagata challenging Shinsuke Nakamura for the Intercontinental championship. A video package came first. It was heavy on piano music and seemed to present Nagata as a humble family man who's been around forever and wants to show that he can still go. It was light on Nakamura but whenever he appeared it seemed like it was being made clear that he respected Nagata. It was a good video package. Even with the language barrier it got me invested in Nagata.


They told a good story. The veteran Nagata had more tricks up his sleeve and wasn't intimidated or thrown off balance by his opponent's silliness but Nakamura had speed on his side and a more vicious streak. Nagata was resilient, surviving multiple Boma Yes and kicks but it wasn't enough to get him the victory. He came close to a victory with some stiff blows, a perfect top rope belly-to-belly suplex, a vicious German suplex, a belly-to-back suplex and an armbar but ultimately Nak polished him off with a desperation knee to the temple. It was a great main event.


On balance I think the Sendai show was the stronger offering. It only had the two standout matches (the two championship matches that closed the show) but both were of a higher quality than the key matches of the Osaka card. The undercard again failed to disappoint and featured fun outings for Tenzan, the junior heavyweight champions and their challengers, Tanahashi and Meiyu Tag. I wouldn't say either show is a must-see event but they both boasted must-see matches.