It’s been around a year and a half since WWE initiated Sheamus’s main event push. In that time he’s won the Royal Rumble, captured the World Heavyweight championship at WrestleMania and gone on to enjoy a six month reign, been given the chance to shine on pay-per-view with everyone from Daniel Bryan to Alberto Del Rio and consistently been presented as one of the company’s top stars. In short he’s been handpicked for a spot as a major star.


On the surface it’s easy to see why he was given the spot. He’s a tall, muscular guy with, by WWE standards at least, a pretty unique look who knows how to cut a promo without stumbling over his words. That he’s Irish doesn’t hurt either. WWE are increasingly keen to have headliners from foreign lands. It helps their quest for world domination.


Despite these obvious qualifications for the role I find myself bored of ‘The Celtic Warrior’ in his current position. A couple of years ago I thought he’d be great when his face turn finally occurred. He was decent for a while but he’s not become the hit I’d expected.  Ultimately he’s turned out to be a crushing disappointment. 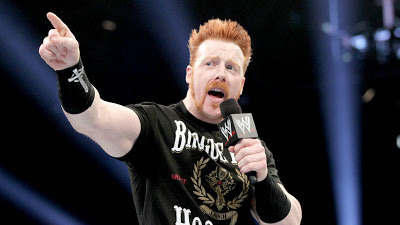 "Fella!"
Looking back it’s easy to see why this has happened. His promos have become increasingly predictable. He’ll come out, allude to his love of fighting and then crack jokes at the expense of whoever he’s feuding with. Sometimes he’ll throw in a reference to grandfather. The Sheamus we have today would much rather run through this routine than be try to portray an opponent as a serious threat.


His move set is pretty shallow too. There’s his ten punch in the ropes spot, White Noise and the Brogue Kick. Beyond that he kicks and punches his way through matches on autopilot. It’s not the arsenal of a wrestler who thrives on providing variety.


Does this remind you of anyone? Because it reminds me of John Cena.


Shaymo has basically become a taller, whiter and more Irish version of John Cena. He’s a top line act marketed at kids only with less emphasis on T-shirt sales. There’s nothing wrong with that approach in itself because WWE needs guys to keep the kids interested, but it feels like a waste. The big man could fill a larger role if used differently.


I can still remember the cowardice that characterised he’s initial run as a main event heel. That seemed like a poor use of him at the time and the same thing seems to be happening with the him now. If Sheamus is to win over me and other dissenting parties over he’s going to need to be given a more serious persona. He can’t be joking one minute and talking about getting into a brawl the next. It’s jarring and unbelievable, even by wrestling’s standards.


On top of everything else, he’s just boring. Cut down on the promo time for a while. Less is more and all that. Giving overexposed parties less air time helps them to appear fresher without actually changing anything. It gives others more time too.


Pairing him up for a feud with Mark Henry is a good start. ‘The World’s Strongest Man’ character is one of the most effective heels on the roster. There’s nothing (intentionally) comedic about him and so he helps to bring out the best in Sheamus. Yes the Irishman still makes jokes but there’s a visceral realism to the interactions he has with Henry which cast Shaymo in a positive light.

I still think there’s a chance Sheamus could become a successful headline babyface but it’s not going to happen now. He’s become too jovial and affable. A second run as a bad guy is needed before he can become the loveable rogue WWE seems to want to cast him as. Some distance needs to be created between his current character and whatever he ends up as. That distance that can only be attained with a run as a heel. If WWE are smart they’ll turn him later this year and give him eighteen months or so before having him turn back into a more serious good guy.


Of course, I could be wrong. John Cena seems to have turned out pretty well for them.
Posted by Dave at 15:21