Over the last several years WWE has gotten into the habit of promoting a large-scale, "game-changing" storylines during the summer months, in a fashion not entirely dissimilar to comic book crossovers that hit the shelves annually. 2009 saw Donald Trump “buy” RAW from Vince for a week before selling it back at an inflated price. It achieved nothing and didn’t fit with the pattern that established itself over the following years of the Big Event being something that would change WWE’s creative direction in the long term. It was more of a learning curve, as was the exploding limo stunt of 2007.

2010 gave us the massively promising but ultimately disappointing Nexus invasion. The next year CM Punk cut that memorable worked shoot promo of his and rocketed up to the top of the card. They followed that last year by having him assault The Rock, turning him into a bad guy.
And this year... Nothing. There had been an absence of such a development in 2013.
About the closest they came was Mark Henry's retirement swerve. That did an excellent job of shocking viewers and reheating Mark Henry for his WWE championship match with John Cena. Which were its only goals. Henry wasn't and isn't the sort of performer who could be used to start a bold new creative direction.
It seems that the era of the summer blockbuster in WWE may have gone. For some that will likely be reason to rejoice. It had gotten to the point where we were expecting a big storyline to kick off around the same time each year. Predictability in wrestling is rarely a good thing so in that regard the apparent ceasing is good.
But there was a positive to be had from the approach. Predictable as it was it ensured the WWE creative team were trying something big each year in an attempt to excite more experienced (jaded, call it what you will) fans and attract new ones. The usual formulaic approach to writing RAW was tossed aside and something new was sought. It was an annual freshening up of what is often a tiresome approach from WWE.
They didn't always get it right. Vince McMahon's car exploding is remembered for all the wrong reasons and failed to actually lead anywhere. The same can be said for the Trump purchase, when it’s remembered at all. Nexus was bungled but it started out as a very appealing idea. Handled better it could have been a winner and memorable for the right reasons. 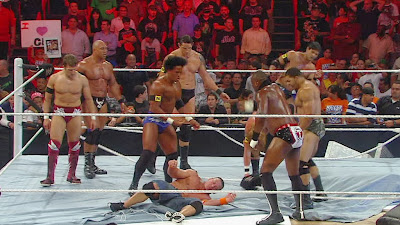 Spot the only guy no longer with the company
But they undeniably hit the nail on the head with CM Punk. They faltered a little in the late summer and early autumn of 2011 but by the end of the year they'd worked out how best to use and present him. The heel turn was essentially an upgrade of what we'd already had. It worked in part because WWE were willing to use ‘The Second City Saint’ correctly. The heel turn was a chance for him to do something different.
WWE have been doing a very good job this year so they clearly don't need their annual Event Moment. It's not as if not doing anything this year means they'll never be able to give us a shocking moment of RAW ever again. I'll miss the approach though. It gave us something to look forward to. And that's just as important a factor for episodic television as anything else.
Posted by Dave at 19:45