Despite not working for any wrestling promotion with a meaningful television deal Colt Cabana is known to a lot of wrestling fans. His notoriety can be explained by his stints in ROH and (as Scotty Goldman) WWE. In the former he gained a reputation for being a well-rounded performer, someone who could brawl, wrestle technically, do comedy or cut a promo with spirited proficiency. Fans appreciated him for his versatility as much as anything else. He was little more than enhancement talent in WWE but he brought something even to that lowly role.


Since parting ways with Ring of Honor in 2011 Cabana has maintained a high profile, thanks largely to his Art of Wrestling podcast. You've probably heard of it. If not I suggest listening to an episode. The general idea is that Colt speaks to fellow wrestlers about their personal lives, wrestling careers and feelings on the business. It provides a fascinating insight into wrestling and usually makes you appreciate wrestlers who appear in a new light.


It's also given us an insight into Cabana as a person. That he is routinely affable and humorous makes the podcast a good listen, as does his under-appreciated skill as an interviewer. He gets the best out of his guests.


That he's fashioned a name for himself as a podcasting personality shows that he knows how to connect with wrestling fans and that fans want to follow, support, listen to and watch him. With that in mind I'm surprised he remains out of the loop of North America's big three promotions.


TNA should be desperate for new talent to add to their bedraggled embarrassment of a roster. Cabana would fit the bill perfectly. He's likeable enough to prove inoffensive to existing viewers, a good enough wrestler to give us enjoyable matches with mostly everyone in the company, and could feasibly attract a small number of new viewers who'd want to see what TNA does with him. There are very few wrestlers available to TNA at the moment who could have the potential impact of Cabana. 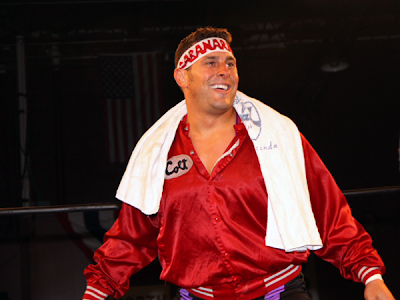 A happy young man
A return to ROH seems to be hindered by a long-standing and hazily defined grudge Colt holds against the group. He originally left because he was unhappy with the treatment he received during SBG's purchase of the promotion and dealing with Jim Cornette. He has since been angered by DVDs being released on his career. I can understand both sides there. ROH has realised Colt is popular and put their library of matches to good use releasing footage of him. It makes them cash, which is the point of the exercise. But Cabana has said he doesn't see a penny of any sales made, which is naturally going to irk him as ROH is benefiting from his success.


What's peculiar is that this indicates Ring of Honor understand Cabana has enough if a following to make producing a DVD worthwhile. Yet they haven’t done everything they can to bring him in.


It was revealed during Kevin Steen's second AOW appearance that ROH contacted Cabana after Jim Cornette left last year. Obviously nothing much came of that contact. They should keep trying. In Cabana ROH would have a readymade main event star to use. As with TNA he could wrestle enjoyable matches against pretty much the whole roster.


Then there's WWE. I can understand why they didn't keep him around as a wrestler. He's not out of shape but he's also not ever going to get into the condition the promotion likes its top stars to be in. He's also unlikely to produce a five star WWE style match.


But what he could do is be a great colour commentator. To put it slightly indelicately, Jerry Lawler is not going to be able to stay at the commentary desk forever. The RAW team will probably end up as JBL and Cold when 'The King' retires but it would be prudent to introduce a third man or an alternative now, on SmackDown or one of the peripheral shows, to allow for a smoother transition when the time comes.


Cabana could obviously provide the insight on what the wrestlers are going through that colour guys are supposed to and his age and experience using social media for himself should allow him to more naturally plug polls and talk about tweets than Lawler (and JBL for that matter). A final bonus of having Cabana working as a commentator is that he'd be available for matches against guys having tryouts or joining the main roster from NXT.


Perhaps Colt himself is against all of the above and is happy roaming the world wrestling smaller shows. If he is then great. It's nice that he's enjoying himself. But I hope it is his choice, because if it's not a very talented man is being wasted.
Posted by Dave at 18:02