When the current Corporation story-slash-Triple H and Randy Orton heel turn started I was reluctant to join what seemed to be a large number of people saying that it’s a rerun of the, very successful, Austin v McMahon feud. For starters it doesn’t really matter if elements of the more successful plot crop up. It ended fourteen years ago. There are sufficient viewers regularly tuning in who can see this programme through entirely fresh eyes. Ad there’s nothing wrong with emulating successes, especially your own.


More to the point the original cries of a rerun seemed to be based exclusively on Daniel Bryan being pitted against a united McMahon family. For me that’s not grounds enough to compare storylines, or Bryan and Austin for that matter. Plenty of wrestlers have been in that situation.


As the story has developed things have happened that have made it harder to distance it from the original Corporation tale. This isn’t necessarily a bad thing. As I’ve already pointed out the original was a hit. Writing this isn’t intended as a knock or a complaint, more an opportunity for me to empty my mind on the subject of comparing the two Corporation factions. 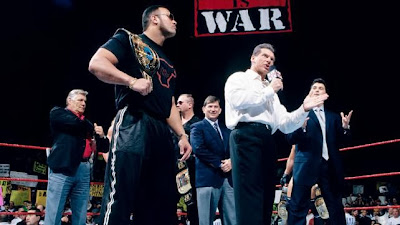 Finally an excuse to use a picture of the original Corporation line-up!
One of the more obvious similarities is one that a lot of people seem to have overlooked. Both groups involved Triple H. In the current incarnation ‘The Game’ is very obviously at the centre of the plot, in the role previously occupied by Mr McMahon in 1998 and ’99. Vince, for his part, has drifted off into the ether (for now) to allow Trips to establish himself as the leading on-screen bad guy.


He was a late recruit to the original Corporation. He turned on his pal X Pac at WrestleMania XV, which marked the beginning of his journey to the very top of the card. He was overshadowed by The Rock for his first month in the group and barely got a chance to shine once ‘The Great One’ left the group before it was unified with The Ministry of Darkness and he was left playing second fiddle to The Undertaker. It’s easy to forget his involvement, but it was a significant part of his career.


The Shield are obvious equivalents of Big Boss Man. The way they’ve been tasked with guarding the ring since Helmsley went bad indicates that they have some sort of authority over security staff at venues. That was always the (hilarious) conceit with Boss Man. Apparently working as a prison guard in Cobb County, by God, Georgia prepared him for such a role.


Ambrose, Rollins and Reigns also vaguely, although not as clearly, also fill the same roles as Ken Shamrock and Test used to. They were and are all guys who can perform run-ins and work as bump fodder for the bigger names. Between the three of them they also hold a singles title and the tag straps, just like BBM and Shamrock did.


Another aspect of the original that seems to have been forgotten is Kane’s involvement. He was blackmailed into doing the bidding of his bosses with threats of being institutionalised1. Does that or does that not sound incredibly similar to Big Show’s current plight?


Beyond the fact that both oppose the real life and on-screen bosses of the company there are no glaring similarities between Austin and Bryan. They’re very different personalities and wrestle very different styles. And as much as I like ‘The Dazzler’ he’s no ‘Stone Cold’ Steve Austin. ‘The Rattlesnake’ was a major part of creating WWE’s most successful period ever. Bryan is more simply a currently popular wrestler who may or may not work out as a long term headline attraction.


I’ll stop short of saying that Steph’s in the Shane McMahon role. Firstly it’s not an entirely accurate comparison. Secondly the relationship she shares with the Vince analogue and the original Vince and Shane relationship are very different things.


1 This was at a time when ‘The Big Red Machine’s’ character was far less relatable and fleshed-out, and at a time when WWE were happy to run stories like that.
Posted by Dave at 07:39