Anyone who watches NXT will be aware of Sami Zayn. For those who skip it (and you shouldn’t, it’s easily the double W’s most consistent and fun weekly show) he’s the artist formerly known as El Generico. Since first appearing on the May 22nd edition of the show he’s had several very entertaining matches on the show, the most notable being an impressive trilogy of with Antonio Cesaro.


Those matches are amongst the reasons he’s been such a big hit. That he’s been the one beating the more established star hasn’t hurt but it’s not the main reason. It’s more a case of the two putting on incredibly good matches. Cesaro being willing to sell for a smaller man helps there, which is such a standard thing from him that it’s easy to take him for granted.


That a guy from the main roster showed up and wrestled such competitive matches with a guy being portrayed as a member of a lower caste (that’s basically what the developmental roster, y’know) helped Zayn make an immediate splash. Which was the point of the exercise, of course.


That his former identity is an open secret has been both help and hindrance to Zayn. It has ensured that fans paid attention to him early on, which gave him a leg up on other NXT fellas. But the “Olé!” chants that used to be a rallying cry for ‘The Generic Luchador’ being heard at Full Sail is less than ideal. It shows that he is still more readily associated with his former identity than his current one. 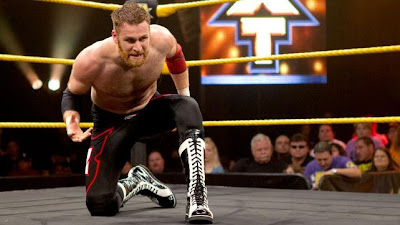 I like this guy
That could make WWE think twice before moving him up to the main roster. If they can’t find a reason to explains the chants yet the chants remain then they could be wary of promoting him to the centre stage. WWE does not like things cropping up on their TV shows that they haven’t created. And they definitely haven’t “created” Spanish language chants being directed at a French Canadian.


In truth I can’t see it being that much of an issue. WWE will surely appreciate that Full Sail attracts a regular audience with knowledge of indy wrestling, and as such wrestlers who made a name for themselves in that area will be more popular.


When he does advance to the bright lights of the bigger shows Zayn will be a tremendous asset. He works a fast, exciting style and has a repertoire of big moves that should set him apart from his peers . He has a great range of facial expressions and body language that begs to be put into an underdog babyface role. He’s a naturally witty guy and a snappy dresser to boot. He’s also one of a growing number of guys under WWE contract who’s come up through the modern day equivalent of the territories, which means he can be relied on more than many of his peers.


I like Sami Zayn. And when he appears on the main roster you will too.
Posted by Dave at 22:12