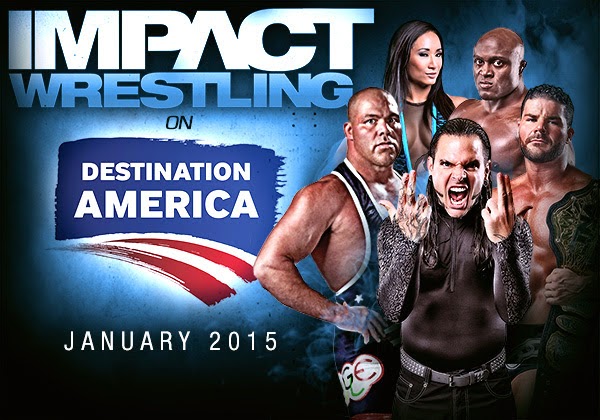 Come January 2015 TNA will have a new televisual home in the US: Destination America. It’s a channel I’d never heard of until about a week before their deal with TNA was officially announced. That’s mostly because I don’t live in America but it’s also due to the channel being distinctly niche. It’s available in just over half the television owning homes in the United States. That’s nowhere near as many as previous TNA home Spike TV. As such TNA is going to be continuing the downsizing that they started last year.


Linked to this obvious need for continued cost cutting has been talk of a company-wide reboot. TNA producer Bryan Edwards has confirmed via Twitter (yes Twitter, that oracle of the modern age) that the wrestling company will be getting a new logos and graphics and a fresh start. This is actually a great idea for TNA. It’s a chance for them to freshen up their look and begin targeting a new market. Personally I think they should go for young adults (under the age of 25) who aren’t necessarily wrestling fans. But that’s just me. They could pick any market they like, what’s important is that they come up with a strategy to attract fresh eyes.


It’s also an opportunity for the company to make some roster cuts. They’ve done a bit of this over the last couple of years but they haven’t really taken the right approach. What TNA has done up until now is negotiate with wrestlers and cut them if a financial agreement can’t be reached. No thought has been given as to whether wrestlers are worth keeping around.


If it had been then Abyss would have been cut long ago. No matter how little he’s willing to work for he’s simply not someone worth keeping around. His character is stale, he’s faced everyone, he doesn’t have good matches, and it’s inconceivable that he is going to convince anyone hopping around channels to stick with Impact Wrestling. The money paid to him is better spent on new names that may stand a chance of helping TNA increase its audience.


This isn’t just an attack on Abyss. The same principle applies to Mr Anderson, Rob ‘The Freak’ Terry, Bram, Gunner, and Shark Boy. They’ve all been affiliated with TNA, on-and-off, for years. There’s nothing worthwhile for any of them to do, no matter what storylines they’re thrust into or how they’re repackaged. What TNA needs is a young vibrant roster that isn’t so synonymous with mediocrity. And now’s the time to go about getting that.


TNA has a month before they debut on Destination America. That’s enough time to get some new names for the roster, get a solid head start on TV scripts and a long term plan for the top names, and think of ways to introduce their roster to a new audience. The latter should definitely be a priority. Although the potential audience is smaller there will still be new people made aware of TNA’s existence by the move. Some will give Impact a try, and those are the people TNA need to be catering for.


I’d like to see TNA put together some introduction videos for their top names and perform some minor tweaks to a few characters. The videos wouldn’t need to be anything long or elaborate. Thirty second to a minute of a performer explaining their character’s history within the company and their motivations for getting in the ring each week, interspersed with footage of particularly memorable moments or impressive moves, would be enough. Putting them on the TNA website and running them before the first Destination America match of each performer would be enough. Maybe they could be edited down and used as adverts on the channel.


Tweaks to characters don’t need to be anything major. It could as simple as a costuming change. That’s actually something that could be done to Bobby Roode. He’d suit a white pair of boots instead of black. He’s probably the company’s top face right now (good guys wear white, y’know) and it would help him stand out from the black boot clad roster. It’s nothing major and would be a minimal cost, but it’s an lateration that would separate one of their top guys from his peers and the competition.


Meanwhile Austin Aries could do with some more substantial work. His in-ring work is great but his character has been let down by too many face-heel switches over the last year. Now’s the time for TNA to decide what role they want ‘A Double’ to fill and what sort of persona would be most beneficial for that. The stuff he was doing at the end of his ROH run in 2010 (being a player-manager, being a spokesman for less experienced wrestlers, and using a smoking pipe as his signature foreign object) has potential in TNA. It would certainly be a better idea than the wishy-washy approach that’s been taken with him over the last year.


It’s also a chance for TNA to decide on an identity. Being WWE Lite is what’s got them into this undesirable situation. It’s time for them to admit to themselves that hasn’t worked. In an ideal world they’d go with longer term storylines modelled as much as is realistically possible on the sort of thing people get from popular shows like Game of Thrones, True Detective, and Breaking Bad. Because that’s what’s popular now. In the ring concentrating on the Knockouts and tag team divisions wouldn’t be the worst idea because WWE, their chief rival, doesn’t do much of either. As far as tag wrestling goes nobody really makes it a major part of their product. That’s TNA’s gap.


I want TNA to succeed. I hope this Destination America move works out for them, because I don’t think they’ll stick around if it doesn’t. TNA’s success is what’s best for the wrestling industry in general. If TNA do well then the wrestlers have more places to work and fans have more choice in how to spend their time and money. Most importantly it makes every other promotion work that bit harder, which can only be a good thing.
Posted by Dave at 06:57