Remember Chris Sabin? He's the man who has worked for TNA for a decade, routinely being relied upon to provide exciting matches. He's the man who was chosen to unseat TNA's lead heel as world champion. He's the man that, with a little bit of work, could have been a perfectly satisfactory addition to the company's rather drab main event scene.


You and I may remember who Mr Sabin is but TNA's writing team apparently do not. Just four weeks after his world title reign (which also lasted just four weeks) was unceremoniously halted Sabin has already slipped down the card enough to be omitted from what is allegedly a pay-per-view quality edition of Impact Wrestling. The treatment obviously does Sabin no good and it's not a positive for the TNA world championship either. That now looks like something that anyone can get a shot at and win. That's not how any promotion should present what is supposed to be their top prize.


Thankfully this was the only major complaint I have about No Surrender. Sabin's absence aside it was a perfectly fine show.


The evening kicked off with the standard video package. It was well produced. First it showed us the four men who would compete in the BFG semi-finals and finals, each man doing his utmost to stress the importance of the BFG series and the title shot the winner would receive. Following an F Scott Fitzgerald quote (I like the idea of TNA doing more literary quotes, partly because it's such a clichéd thing to do that it suits them perfectly) we were shown how the Mr Anderson and Bully Ray, the Vice President and President of Aces and Eights respectively, issue came about.


Bully Ray opened with a promo. That wouldn’t have happened were No Surrender a real pay-per-view. He said the problems between Anderson and him were because of General Manager Hulk Hogan. That brought out 'The Hulkster' who said that Bully should be focused on Anderson, cracking the same "You should be worried about facing one of your brothers, brother!" gag twice. Hey, no one can accuse Hulk of not reusing things that work.


Bully called Anderson out to the ring. His music hit immediately, almost as if he'd been waiting at the gorilla position. The Vice President of Aces and Eights refused a handshake from Hogan and joined Bully in the ring. He was told that if he just apologised it would all be over. After very briefly teasing giving that apology he decked the Pres. After that he shouted his own name and Hogan got back on the stick to say that the world title match would be a Last Man Standing match.


Match one saw Austin Aries meet AJ Styles. They had the sort of smooth and enjoyable match you'd expect. There was nothing wrong with what they have us at all. The finish came when 'A Double' went for a splash in the corner but got hung up on the top rope. Styles then hit a Pele kick and followed up with a middle rope Styles Clash for the win. 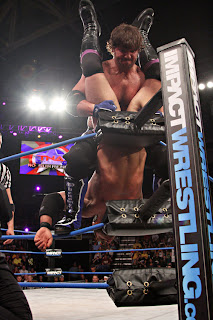 Finish ahoy!
Backstage Sting tried to give Magnus a pep talk. Magnus told him he's tired of being the future and declared he was going to be the champion. Samoa Joe was slouched on a sofa throughout.


After a break Bobby Roode was shown screaming at Taz, Mike Tenay and the referee whose surname isn't Hebner, demanding Magnus be brought out so he could beat him and then go on to beat Styles in the finals. We also got a shot of a handful of the St Louis Rams. Which was... well, it was something. Their support would mean a lot more if they were shown to support TNA on non-TNA programming. But obviously that's not going to happen.


'The It Factor' got the match off to a quick pace when he jumped Magnus and instigated some fiery brawling. When they got underway in the ring the intensity remained and they produced a very lively match. Magnus reversed a fisherman suplex into a double leg takedown, floating over for a victory from nowhere. Presumably he didn't get a more convincing result because TNA want to keep the Extraordinary Gentlemen's Club member strong.


Backstage Roode jobbed out a table before being joined by fellow EGO boys Daniels and Kazarian. Roode said it was Hogan's fault they weren't in the finals and said if they couldn't be there nobody would be. That so many heels blame Hogan for their woes is distressing. He's had his TV time cut as a way of saving money and isn't going to be working a match any time soon, yet he's essentially positioned as the company's top face, the man all the bad guys are gunning for.


Talking of Hogan, he was shown talking to TJ Perkins backstage. Apparently the Manik gimmick reminds Hogan of his Hulk Up routine. I think he may have taken one too many chair shots. Dixie Carter came in and told Hogan that Bellator has pulled Tito and Rampage until after they've had their MMA match on November 3. That's not a loss. If anything it's a good thing for TNA. It will force them to concentrate on their wrestlers for a while.


Elsewhere in the arena Bully Ray ranted at Knuxx, Garrett Bischoff and Wes Brisco. His feeling was that they wanted Anderson as the world champ and club President over him. The three didn't get to address these accusations. They're not important enough to have speaking parts. Bully said he knew they'd do the right thing and walked off. We were left to presume "the right thing" was interfering in the world championship match on his behalf as opposed to not getting involved and seeing who could win on their own merits.


Following a recap of the tensions between Anderson and Ray we got the TNA would title match. As gimmick brawls go it wasn't a bad one. The only minor niggle I have is that Anderson wrestled in his Aces vest and jeans. Surely the storyline would've lent itself to Anderson busting out his more traditional wrestling trunks. Perhaps they want to save that for later, to signify he's finally done with the group.


Anderson had the match won from a Mic Check onto a chair but Bully had floored Hebner with a manly shove into a turnbuckle. Hebner had stood up to him, y'see, and the champ didn't like that. Anderson dragged Ray to his feet, presumably to hit another move and keep him dazed, this earning himself the gold. Instead he was floored with a Bully Cutter. This was the signal for the rest of Aces and Eights to mosey on out. Anderson staggered to his feet only to be low blowed by Brooke (Tessmacher, not Hogan) and triple power bombed (Shield style) by A&E.


Hebner recovered to make the count and Anderson managed to make his way back up by nine. A chain-assisted punch put him down for another count of nine. He finally went down for ten after he was tackled through a table by Bully.


Anderson was put on a gurney and wheeled up to the entrance ramp to be slapped about some more by Bully. The champ whipped Anderson with the leather vest and then gave him a piledriver on the steel. It's nothing we've not seen before from the character but it did earn some heavy boos, so it was obviously the right thing to do (from a booking standpoint, of course). 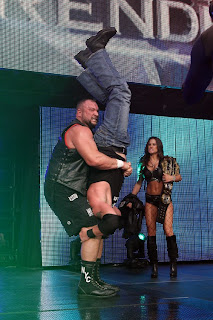 Nothing gets heat like an exposed piledriver
ODB was shown in a bar talking up a Knockout title match had scheduled for the next able. It was effective as a thirty second promo.


James Storm and Gunner came to the ring for a dire segment. Gunner just stood around as Storm shouted nonsensically. It was easy to believe in his gimmick of drinking heavily. Chavo and Hernandez interrupted and acted in a decidedly heelish fashion. Gunner granted them a title match for the next episode of Impact. Everyone involved seemed stilted and ill-prepared for the exchange. It highlighted how much TNA needs fresh teams.


In the main event AJ Styles defeated Magnus in a match that was fitting of being the final instalment of a lengthy series. EGO interfered at one point, attacking both competitors before being dealt with by officials. When the show returned from a break they were gone and weren't seen again. It was odd booking.


'The Phenomenal One' won with a Spiral Tap. There were more shots of Magnus immediately after the bout finished than there were if Styles celebrating. He looked glum. Perhaps a heel turn could be coming. That wouldn't be the worst thing TNA could do. 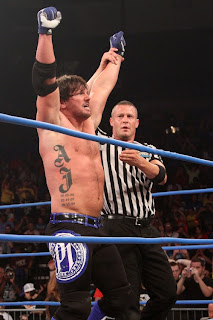 The next TNA world champion?
Styles cut a promo about not getting a response from Dixie Carter about the mistakes he pointed out a week or two ago. He asked for Dixie to show up next week, so that he can point out more mistakes presumably. It wasn't the greatest thing AJ's ever done, but I've seen far worse from him.


While this show didn't do anything wrong it didn't do anything to show that TNA understands they need to do something new and different. Some interesting possibilities were presented (potential Anderson and Magnus turns, EGO being used as a strong faction beyond the BFG series, something involving Styles and Carter) but none of them are things that will turn TNA's misfortune around.


The final words of the show? "Stay tuned, Bellator is now!" I think that says it all about TNA's standing.
Posted by Dave at 19:54