This is going to be a short one so enjoy it while it lasts.


When I first started watching wrestling long hair and ponytails were the fashion. Look back at late 90s WWF and WCW shows and you’ll see what I mean. The rosters were packed with guys in love with their hair. Purely by coincidence Kevin Nash was on top then.


I could write extensive lists to prove my point. I won’t. I’ll name a few guys to highlight how prominent the long hair look was and I’ll let you continue from there if you want. Triple H is an obvious guy to mention, as is his DX stablemate Shawn Michaels. Edge, Christian, Billy Gunn, Val Venis, Al Snow and Test are all also on the list.


Over in WCW there was, as has already been mentioned, ‘Big Sexy’ leading the way for the follicly gifted. Chris Kanyon, DDP, Lex Luger are a handful of the others that sported the look there.


Over the years long hair has seen its popularity dwindle. Over the course of the last decade shorter hair has become the norm as guys like John Cena, Randy Orton and Batista have risen to prominence with shaved or short hair.


Over the last year or so the short hair look has been slowly replaced by another. Nowadays beards are the in thing. And I don’t mean trim little goatees. No, these days huge, thick, long beards are fashionable. Daniel Bryan’s rise to the top of WWE has helped there, and he remains the most obvious bearded wrestler to highlight, because he draws attention to it with promos and merchandise. 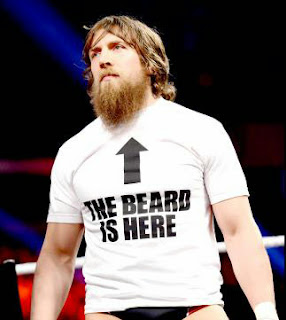 I'm writing about beards now, apparently
There are plenty of other beards on offer. The Wyatt Family have some astonishingly lengthy facial hair. Curtis Axel has, if you pay attention, a surprisingly scruffy beard, as does Jack Swagger. Mark Henry, Randy Orton, Kassius Ohno, Antonio Cesaro, Damien Sandow, and Sylvester LeFort are among the many men on the roster who can boast of powerful and-or manly facial hair.

It's not just WWE where we're seeing this. Jay Briscoe, Mike 'Knuxx' Knox, Bully Ray, Gunner and James Storm are prominent names rocking the look elsewhere. I'm sure there are others I've not heard of.


There is no point to this post beyond me noting the observation that ponytails will be back in. Or maybe some bold new trend will have emerged. Mohawks or mankini ring gear or tattooed faces perhaps. Who knows?
Posted by Dave at 09:00