If you're a loyal TNA fan you may be aware of their latest attempt to grab new viewers. I'm taking of course about their #August1warning videos. They're a series of videos that first appeared last week on the promotion's YouTube accounts.


The videos show a shadowy figure and are of deliberately poor quality, although they’re made in such a way that even the deliberately poor production is a letdown. The figure appears to be bald and is either a man or the most unfortunately masculine woman I've ever come across. Speaking via a voice modulator he has addressed his impending Impact Wrestling appearance (on August 1st, obvs) and assured us he's a name known to TNA fans.


The videos have succeeded in getting people talking. Whether they'll get people tuning in remains to be seen. I have my doubts but I'd love to be wrong.

Even this moderate success is blunted by TNA's standard issue inefficiency. The videos have had less than a week to take effect. Had they started earlier they could have been seen by more people, which obviously would have increased the chances of higher viewing figures. As it is they've not even been seen on TV.


I understand TNA wanting to present them as real but that shouldn't be done at the cost of potential success. They could have been played on TV with an announcement that management don’t endorse the content, which is what’s happened on YouTube. Even the old “the airwaves were hijacked” routine would have been better than making them online exclusives.


The identity of the silhouette is a genuine mystery, partly because there are no big names unaffiliated with a wrestling company who could realistically be expected to join TNA. The "favourite" seems to be ‘Scrap Iron’ Adam Pearce, in large part because he's bald like the mystery man. Apparently it's occurred to very few people that a voice actor could be providing the voice for the video, and an actor could have been hired (in kayfabe terms) to portray the figure.


You may recall Pearce appeared as a Gut Check contestant a while back. While he failed to get a contract he was written out in such a way as to make a return possible. For various reasons I hope it's not him behind the vids. For one thing he's not a big enough name to qualify as a non-disappointment in the role come the reveal. For another while he's a solid wrestler and a decent enough promo he doesn't possess those undefinable star qualities that make me think he could turn into a reliable headline star. He has a generic, mid-card look and at 35 it's unlikely that he's yet to peak. I wouldn't be averse to TNA bringing him in. I just don't think he's right for this particular route to the roster. 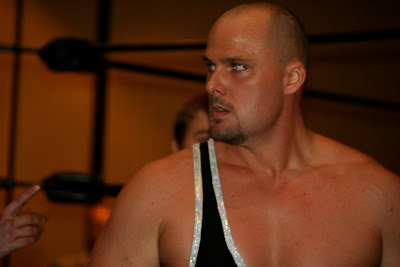 TNA's next star?
Another name suggested is Low Ki, although he used the name Senshi during his 2011 run in TNA. And WWE fans will know him as Kaval. Personally I feel he's a bigger name than Pearce but he's still not well known enough to justify such a (by TNA standards) much hyped (re)introduction. He could be of great benefit to the X Division but that's a moot point because TNA don't seem to care about that at the moment.


Sticking with bald wrestlers it could be Sonjay Dutt. Alright so he was on Impact last week, but that's not the sort of thing to stop TNA. He's not under contract and nobody's expecting him to be on tonight's show, that's about all the motivation they'd need to put Dutt in this role.


Anyone who thinks it could be Batista is kidding themselves. He's beginning to make headway with his acting career. He wouldn't jeopardise that by flying to a 3,000 seat arena once a fortnight to feud with Bubba Ray Dudley. It's just a completely unrealistic suggestion. If and when he returns to rasslin' it'll be with WWE.


The former MVP is yet another longshot. When he left WWE he negotiated a deal that would allow him to use the MVP name anywhere except TNA. That's reason enough to make me think it’s not going to be him. There are other reasons available too. He's talked publicly about having left WWE on good terms, which indicates that he's got a mid-card spot waiting for him should he want it. Also discussed publicly is his non-wrestling project with a US TV network. Right now the guy doesn't need wrestling. He's achieved his dream of wrestling in Japan and if he wants to return to the business in a meaningful role it will be with WWE.


John Morrison is in pretty much the same position. He seems satisfied working indies, taking minor acting roles and doing a bit of standup comedy. I expect to see him back in WWE at some point, not joining TNA. And on a side note the standup should help to improve Morrison's stilted promo style. That's the one area that's consistently let him down over the years and if he can fix it he could get the WWE success many feel he's entitled to.


A more credible name than the former WWE performers is Tito Ortiz. A former UFC stalwart, Ortiz has recently come out of retirement to sign with Bellator. That's the same Bellator that has contracts with TNA performers King Mo and Rampage Jackson.


Ortiz is one of the bigger names I've mentioned here and strikes me as a very real possibility. He's got the name value and crossover potential TNA seem hell bent on attaining at the moment and could, theoretically, have been in training for a wrestling career for a while now.


Bringing in Ortiz would be a dreadful move. I've noted before that Mo and Rampage are good tools for TNA to tap into the MMA market for new fans. Two MMA guys in a wrestling promotion is ample. It allows for them to do an inter-promotional feud with one another. In an ideal world that would consist of a trio of matches: a straight MMA match (going first to ensure that whoever wins can lose the second match to necessitate a third), a straight wrestling match, and then a gimmick wrestling match.


A third MMA competitor wouldn’t make that scenario impossible but would detract from its unique appeal. It would also take some of the shine away from Mo and Rampage, neither of whom have done anything significant yet. Three MMA guys in one wrestling promotion risks harming the promotion's image. That’s not something TNA should be risking at the best of times.


Of course none of this means TNA aren't bringing Ortiz in. It would be a mistake but at least he has sufficient cache to meet the hype. I'm of the opinion it's either going to be him or Pearce. They strike me as names TNA would want to use, Ortiz because the company seems keen to try to take wrestling in the MMA direction and Pearce because he’s a competent wrestler whose lack of mainstream exposure would ensure at least six months’ worth of fresh matches.


There's no way of knowing who’s behind the videos until they’re revealed. Thankfully we’ll be put out of our misery tonight.
Posted by Dave at 20:00