I doubt Ring of Honor would have retained as much of its fan base as it has over the last few years without Kevin Steen. Turning on his pal and tag partner El Generico at Final Battle 2009 started a chain of events that eventually made him the most popular man in the company.


It started with the Generico v Steen feud. The former tag champions spent 2010 warring with one another and headlined Final Battle in a wild and allegedly unsanctioned brawl. A loss there meant Steen had to leave the promotion. When he returned six months later Jim Cornette’s booking had taken its toll on the product. Fans were losing interest. The American Wolves had senselessly been split up and shoved into a rivalry over the ROH championship and a poor job was being done of creating new names. If you think this is a trouble for WWE it’s even worse for a promotion operating at ROH’s level. They can’t rely on a handful of stars and a highly successful brand name, their success comes from a steady flow of exciting, fresh talent and high quality matches. But that’s by the by.


Despite being booked as a heel that wanted to tear Ring of Honor apart Steen was greeted as a face at the majority of ROH events in the second half of 2011 and early 2012. The reason for this is almost certainly that Steen tapped into the audience’s frustrations about the state of the company. He said things that those watching felt. His cries for change and the removal of Jim Cornette meant that fans were never going to boo him. He was calling for the things they wanted. 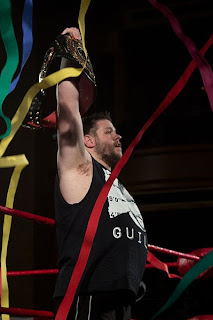 
Things could have gone wrong for him when he won the ROH world title. ROH fans have a history of turning on popular wrestlers once they win the championship. Not only that but Cornette left the company five months into the reign. Without Cornette around Steen could have become directionless. Fans continued to support him. Perhaps they appreciated the hard work he’d put in across the preceding two plus years. I know I did.


In addition to his work in ROH he also appears regularly for Pro Wrestling Guerrilla. His rise in PWG occurred alongside the rise he enjoyed in ROH as his war with Generico was a big deal there too. The turn and feud helped to fashion both men into top names on the indies. For Generico this led to tryouts with TNA and WWE and offers of work from both. Like any sane person Generico wound up opting to take up WWE’s offer. He can now be seen in NXT wrestling as Sami Zayn.


Steen remains on the indies. To the best of my knowledge he has had no tryout with either TNA or WWE. As far as WWE is concerned this is perfectly understandable. They have the money to be able to sign practically anybody they want to a developmental deal. Not only that but they have a roster full of guys in NXT ready to be moved to the bright lights of Monday Night RAW. It’s no secret that they like their guys to be in shape. It’s also no secret that Steen, while incredibly agile for a man of his size, is not in the shape WWE would require.


Basically WWE don’t need to concern themselves with Steen. As good as he is they can afford to overlook him. TNA, on the other hand, should be emailing, calling, tweeting and touting ‘Mr Wrestling’ every day to try and get him to become part of their product. He would be a fantastic addition to Impact Wrestling. He’s affable, funny and likeable enough to succeed as a face but can just as easily summon a brutal intensity to his actions and words, meaning he’d excel as a heel there too. Hiring him wouldn’t instantly turn their flagging TV show around but it would be a step in the right direction.


It’s likely that Steen is perfectly happy where he is. As one of ROH’s top names I imagine he makes a decent living, supplementing it with appearances with other, smaller companies. If he wants to make the move to WWE in the future he’s still young enough to do so, it would simply be a case of getting back into shape. I can’t imagine he’s distressed at the (assumed) lack of interest from TNA. It’s a sinking ship that would almost certainly do his career more harm than good.


I’d love to see Steen in WWE one day. Whether it happens I’m happy to see him doing well in Ring of Honor. And avoiding TNA.
Posted by Dave at 12:37