This week's RAW was never going to match the standards of the post-SummerSlam instalment. That show benefited from great timing, being the episode that established Randy Orton and Triple H as the new untouchable lead heels, reinvigorated The Shield, and made it very clear that Daniel Bryan is the promotion’s next major star. I expected WWE to continue those threads but I didn't expect them to do such a great job. What could have been a humdrum, forgettable episode or a simple rehash of previous events instead built on what had gone before.


The show began with Triple H cutting a promo, protected by The Shield. It was another explanation from the COO, this one regarding his actions at the close of the previous week's RAW. Trips said he had tricked and beaten Daniel Bryan in the closing moments of the August 19th show because Bryan had made it personal. Which was a logical thing to say considering Bryan had screamed and shouted at 'The Game's' wife and generally made a nuisance of himself by not “going back down to the mid-card”.


Tripper's other chosen topic was WWE champ Randy Orton. Talking Orton up as the face of the company is only going to make him unpopular after the ease with which he won the title. This is the point, of course. We are supposed to see 'The Viper' as a paper champion, a corporate tool and the McMahon family's pawn. Comments made in a backstage segment later on in the evening by Triple H, that he considered the WWE championship his personal property and that he allows Orton to carry it for him, further illustrated this point. That Orty didn't pick Triple H up on the comment showed us that he knows he's on to a good thing and doesn't care about how he's perceived.


The opening segment featured Trips giving Orton a gift in the form of a Cadillac Escalade. I'm not really one for cars so I'll have to assume this is a particularly lavish and desirable make. As anyone who has watched WWE for a while can tell you, cars are rarely safe when introduced to the environs of Monday Night RAW. The car would be covered in orange lettered "YES"es later on in the evening by Bryan as a way of antagonising the bad guys. 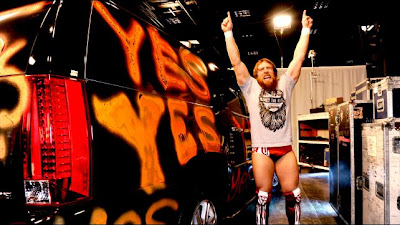 When the WWE Hall of Fame is built this car will be on display. That's fact
Bryan also interrupted Orton and 'The King of Kings' at the top of the show. At that point he was more focused on thanking various people for opportunities and belittling the champion than defacing an automobile. Bryan once again showed that he has a good enough sense of timing and an ability to judge and ingratiate himself to a crowd to work at the very peak of WWE. Those promo skills are just as important as his (rightly) vaunted ring skills. You can't survive as a WWE headliner for a substantial amount of time if you can't carry your weight in a speaking segment. And it's important to note that Bryan can because the fact often gets overlooked.


Bryan's interruption resulted in him being booked in a gauntlet match against The Shield. It was, we were told, what was best for business. That not only showed us that Triple H is corrupt but that he recognises Bryan has attained a certain level of popularity. After Bryan had defaced Orton's lovely car Day Tripper decided that the rest of the roster would have to stand and watch the match(es) from the top of the ramp, with anyone interfering being fired.


This was similar to the previous week's white hot show closer but that didn't matter. It reinforced that Triple H is now ruling the company through fear and that the reason nobody has come to Bryan's aid is that they've been placed into a position where they can't.


A side note, at this point: WWE has run variations of this story before. The most recent I can think of before this was when Triple H saw the entire roster walk out on him in a vote of no confidence in 2011 (leading to the laugh-a-minute reign of 'Big' Johnny Laurinaitis). Another occurred during the McMahon-Helmsley Era, which occurred within the much broader and more popular Attitude Era, and was mentioned on Monday's show by Christian. The reason I mention these examples isn't to highlight WWE's lack of creativity, because I don't view it as a lack of creativity. Running the same basic story a few times in over a decade isn't unimaginative, in no small part because the situations have arisen and played out in different fashions each time.


The reason I mention it is to draw attention to the fact that WWE tends to have the person who’s been walked out (funnily enough that's Triple H in each of the three examples I've given) on receive their comeuppance in the end. It indicates that sooner or later the Superstars™ and Divas™ will tire of 'The Game's' antics. That's months down the line though, not something we need to overly concern ourselves with yet.


The gauntlet match was the main event. Bryan successfully defeated Seth Rollins in a competitive match before getting jumped by Dean Ambrose. 'The Dazzler' quickly got the Shield member into the Yes Lock and looked like he was going to win by submission... but Roman Reigns broke the hold to instigate a three-on-one beating. For the record that means Bryan won his second match by DQ and the third simply never took place. 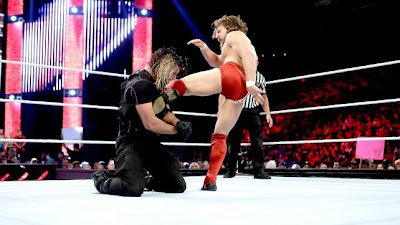 Daniel Bryan gave Seth Rollins a kicking in the main event
After 'The Hounds of Justice' had laid out Bryan with their signature triple power bomb Orton and Triple H appeared. The champ sauntered to the ring and pulled a limp Bryan to his feet to be dropped with an RKO. Up at the top of the ramp 'The Cerebral Assassin' stared at Big Show, Dolph Ziggler and others. Nobody met his gaze for long and it was once again clear that guys can’t stand up to him else they lose their jobs (presumably Big Show’s iron clad contract has expired).


The programme went off the air with WWE's Most Hated heading to the back and The Shield standing over Bryan in the ring. It was more great booking. Bryan was again shown as someone who won't be cowed, giving fans all the reason they need to believe in him, while Orton was presented as someone who hasn't earned the title he carries and is benefiting from preferential treatment. There are few things more likely to irk the modern wrestling fan than that.


Elsewhere on RAW CM Punk beat Curtis Axel in a non-title match. Per a pre-match stipulation, voted into existence through the combined power of the WWE App and the WWE Universe, that earned 'The Second City Saint' the opportunity to get his hands on Paul Heyman in the ring.


Heyman was forced into the ring by security but was saved by his client before Punk could do any real damage. Punk was then handcuffed and beaten with a Singapore cane by Axel and Heyman. It was another overly long segment. The same effect could have been achieved in half the time.


Rob Van Dam defeated Alberto Del Rio in a non-title match when ADR was distracted by Ricardo Rodriguez. It was fairly enjoyable and RVD and Ricardo worked well together. They should be a fine addition to the Night of Champions card.


The best thing to happen on the show didn't involve anyone previously mentioned. After what appeared at first glance to be a generic time filler match pitting Brie Bella against Natalya, with the Funkadactyls, Nikki Bella and Eva Marie at ringside (Brie won), AJ Lee appeared. The Divas champion proceeded to cut one of the greatest promos I've ever seen in WWE or anywhere. It was easily the greatest mic work to come out of the Divas division and the best piece of work in general since the days of Trish Stratus, Lita, Mickie James and Victoria.


Playing off what are probably real life frustrations at being overshadowed by the female performers who appear on Total Divas despite being the Divas champion AJ knocked every woman at ringside. She upped her game when she called the entire group cheap, interchangeable, expendable, useless women who’ve turned to reality TV because they couldn’t get work as actresses. A comment was added, presumably to cover Natalya, that they were not talented enough to be the champion. 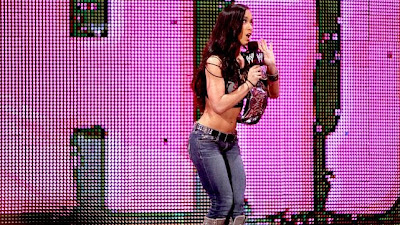 "OMG I just watched last night's episode of Total Divas!" AJ cutting one of the greatest promos ever
AJ said she’d done more in a year than all of them had in their collective careers. Which is absolutely true. This time last year AJ was one of WWE’s most over characters and she’d gotten there by working hard and making the most of what material she was given. AJ earned the Divas championship by making herself a compelling, multi-layered character. No other woman in the promotion has worked as hard to make something of themselves than AJ Lee.


And AJ said this. She said she’d worked her entire life to make it to and in WWE. Her comments about being handed fifteen minutes of fame were not true of all the women at ringside. Natalya has certainly earned a spot on the roster, although she was covered by AJ’s nepotism remarks. But they were true of the Total Divas cast members and that was the point of what is irritatingly being dubbed a “pipebomb”.


After telling the ladies they’d never be fit to lace her Chucks AJ finished on the punnishly wonderful line of “And that… is reality.” If this was the beginning of a resurgence for the Divas division (I’ve written those words before but this time it feels different) then there is not a better women to lead the way.
Posted by Dave at 17:57