Last Saturday's TV taping saw a significant development in Ring of Honor's tag team division. As Matchmaker extraordinaire Nigel McGuinness stood in the ring talking about bringing in outside talent and making the doubles scene truly world class he was interrupted by reigning champions reDRagon.


Fish and O'Reilly, presumably wanting to prove that they're the best tag team out there, requested that their scheduled non-title match against the Forever Hooligans be turned into a championship defence. Agreeing that it would improve the show and that the Hooligans were worthy challengers Nigel granted the request.


And so it was that in the main event of the evening's first episode (which will air this coming Saturday) the Forever Hooligans beat reDRagon for the belts. It was a win that marked Alex Koslov's first title win in the promotion. For Rocky Romero it's a third. He's previously worn ROH tag gold alongside Ricky Reyes, as the Rottweilers, and Davey Richards, as members of the No Remorse Corps.


The win also makes the Hooligans double champions. They were already the NJPW junior heavyweight tag champs. It's an impressive feat for both men, and one that elevates their reputation as a duo. 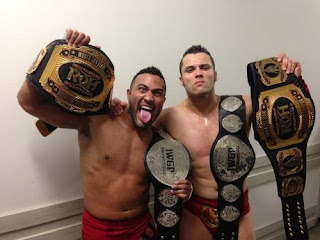 The Forever Hooligans with their hardware
reDRagon's contributions over the last five months shouldn't be overlooked. The team deserves credit for their reign. Fish and O'Reilly treated the titles as though they meant something. That's always a good trait for champions. They wrestled exciting defences against the American Wolves, the C&C Wrestle Factory and the men who'd eventually terminate their run, the Forever Hooligans. They even made Cheeseburger look competitive at A Night of Hoopla. That's not something they had to do, but doing it made the match far more enjoyable than it would have been had they buried or mocked him for twenty minutes.


Both improved their characters throughout the reign. Just because ROH emphasises sportsmanship and match quality doesn't mean interesting characters have to become obsolete. O'Reilly in particular has improved greatly this year. He appears much more confident and has developed a confident persona that meshes nicely with his ring style. Teaming with Fish has been of benefit to him. I hope they continue to be used well and excel as a team.


reDRagon were going to defend the straps against the American Wolves at All Star Extravaganza V. That won't even happen as a non-title affair now, apparently: Fish and O'Reilly have announced via YouTube that as they're no longer the champions they won't be attending the show. They were omitted from the last swing into Canada too. I'm beginning to think Bobby Fish has some sort of legal difficulty crossing the border (O'Reilly won't be the issue: he's Canadian).


Instead Eddie Edwards and Davey Richards will be wrestling the new champions for the belts. I'm sure it will be a very exciting match, although I wish the Wolves v reDRagon match had remained on the card. That would have left Romero and Koslov free to defend against the Young Bucks. As the Bucks are the current Dragon Gate USA tag team champions it could have been something of a dream match, albeit one in which the champions versus champions, best versus best aspect would have been overlooked on commentary. ROH are unlikely to acknowledge Dragon Gate anytime soon. In that regard they're like the WWF used to be with WCW.


As it is the Bucks will take on Adrenaline RUSH and the C&C Wrestle Factory in a match that will be every high spot lover's dream. I can live with the omission of reDRagon with quality like this on the card.


I don't expect the Forever Hooligans to have a long reign. They're over in Japan far too often to be convenient for Ring of Honor to book. Them winning the titles feels like a way of shaking the division up a little and making things a little less predictable. Which, by the way, is fine with me: wrestling promotions should try to surprise fans more often. It's possible that the change is also a way of switching the titles onto the American Wolves without reDRagon losing straight to them, so as to prolong that feud. If that's the case the Hooligans are credible interim champs but I hope they get longer than a week with the gold. They deserve at least a couple of months. Hopefully they'll get that.


However long their reign lasts, whoever they defend against and eventually lose to, I'm pleased the Forever Hooligans' names have been added to the list of ROH tag team champions. It shakes up the division and puts a talented, entertaining and hard-working team at its head. You can't ask for more than that, can you?
Posted by Dave at 19:17