The Reunion: Now Showing in 3D

I don't normally do this but if you're the sort of person who's keen to avoid spoilers regarding TNA you'll want to avoid this until Friday morning. This is the only warning you'll get.


Last Thursday's sort-of-live Hardcore Justice edition of Impact Wrestling hinted at dissension in the ranks of lead heel stable Aces and Eights. Gang leader Bully Ray told his second-in-command Mr Anderson that he didn't feel sufficiently supported by his subordinates. Of course everything worked out for them in the end. Anderson dutifully trotted out to the ring to play his part in Bully regaining the world championship during the main event.


Just because things ended up rosy for the biker boys that don't own bikes last week doesn't mean they'll stay that way. TNA has given us a very clear tease of a potential future storyline.


This Thursday's Impact (recorded last week, hence the uncharacteristic spoiler warning above) will feature a ten men tag match with the stipulation that the man who's pinned must leave TNA. It will be Devon who takes the fall. That could be TNA's way of moving him off our screens and into the D'Lo Brown shaped agent position they have backstage. It could be their way of legitimately getting rid of a guy who has far less to offer than recent firees Joey Ryan and Matt Morgan (and it should be noted neither of them had much to offer). Or it could be the promotion preparing for the next instalment of their long running storyline.


It's easy to imagine Bully Ray losing his world title at Bound For Glory come October. To who doesn't matter. The important thing here is that a bright-eyed babyface is likely to wrestle the title away from Bully at BFG.


What if the loss of the world title leads to Mr Anderson leading a coup of Aces and Eights? He could claim Bully's become a weak link and kick him out if the group. This would work incredibly smoothly, although slightly differently, if it were Anderson that won the BFG series. But honestly, can you see that happening? No, me neither.


With Bully out of A&E the stage would be set for him to battle with the gang for weeks on end until TNA's next pay-per-view rolled around (expected to happen in January). It's not too difficult to envisage Bully challenging Anderson and any member of his crew to meet Bully and a "mystery partner" at that pay-per-view. 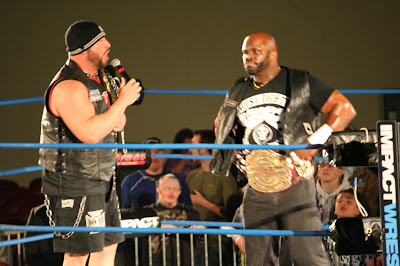 Could a Team 3D reunion be in the works?
Obviously this mystery man would be Devon and we'd have the first major Team 3D match in years against the massive heel faction Bully fashioned in his own image. Just as obviously this scenario would be tedious to watch play out and illogical even by wrestling standards. Why should we care if Bully's kicked of a group he created to bring down TNA (through unspecified means)? The answer is that we shouldn't.


Some people would probably get behind a babyface Bully. He worked well as a good guy last year and for the first few months of this year. But that doesn't mean this scenario’s a good idea. I've written this simply to flag up the possibility. And to give myself something to link back to in six months’ time if they do go ahead with it.
Posted by Dave at 10:16