We all know that backstage segments are a part of modern wrestling. They exist to further storylines and feuds, to provide short bursts of exposure for characters, and to give the ring crew time to set up elaborate sets in the ring. They’re incredibly useful and, when done well, enhance a wrestling TV show.


I’m very much in favour of backstage segments that consist of an interview and a wrestler. It’s simple and effective. The interviewer poses a question to the wrestler, usually about an upcoming match or the person they’re currently feuding with. The wrestler then cuts a short promo on the topic, establishing their motivation in an easy to follow manner.


Sadly this approach seems to have gone out of style. It was pretty common years ago but has been replaced by skits where people sit or stand around having a conversation about a topic an interviewer could easily pose. It’s daft because the camera crew standing mere feet away is never acknowledged. But it’s part of a business that’s about big muscly men fighting one another in lycra outfits, so they’re hardly the most ridiculous thing about a wrestling show.


Besides, there’s a far more irksome form of backstage segment: the ones that provide a pivotal moment in a feud. Obviously there’s nothing wrong with a feud being moved along, but important moments in a programme should always take place in the ring. That way the crowd are kept enthused (at least in theory) and the wrestlers get the best reaction possible to their work. Audiences cannot be expected to react with the same fervour to something shown to them on a screen as to something that they see unfolding before them.


Take the closing segment of the July 26th SmackDown as an example. It saw Damien Sandow storm out to the coast of the Gulf of Mexico to retrieve his Money in the Bank briefcase from Cody Rhodes. Cody first made his former best friend beg to have his briefcase back. It was a distinctly un-babyface thing to do and the audience didn’t react well to it. They may have been just as subdued had the exchange occurred in the arena but obviously it’s not guaranteed. After that Rhodes hurled it into the sea (ocean? Gulf?), mocked his foe, and then wandered off, leaving Sandow to leap into the water before returning to dry land to cough and splutter his way off the air. 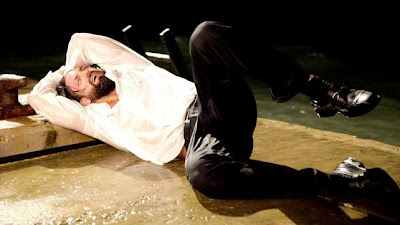 Damien Sandow, soon to be starring in Hamlet
The entire scenario played out over several minutes and completely failed to hold the crowd’s interest. They reacted to the case being chucked into the water and Sandow following it but were tepid for everything else. This harmed the image of both men. Which obviously isn’t a good thing for either man. Sandow appears to be heading for a World Heavyweight title reign sometime in the next year while Rhodes is in the process of being established as a babyface. Too many indifferent reactions could really hinder his chances of working out as a good guy.


I understand that these segments have to happen sometimes in order for programmes to have some variety. They shouldn’t be ending shows though, especially when they’ve gone for such a hefty amount of time, and be comprised of such questionable dialogue. If the babyface isn’t passionate about what they’re doing the fans aren’t going to be either.  Cody’s good but he didn’t seem thrilled with what he was doing on SmackDown. For a lot of the time he was simply stood around looking like an extra from an 80s heist movie.


Basically backstage segments should be kept as short as possible and everyone involved should be clear about what’s being accomplished. If they do have to run for several minutes then the wrestlers should be doing something that’s not been done before (and throwing things into bodies of water has happened many times on WWE and F programming). They certainly shouldn’t be closing shows.


That said… the feud of the former Rhodes Scholars and best friends is shaping up nicely. I’m looking forward to seeing them do more together. Though preferably in front of crowds.
Posted by Dave at 16:41