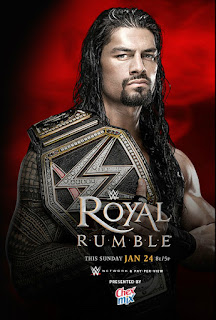 At this point it's pretty much a tradition that the Royal Rumble "poster" feature a bunch of guys from the entire roster, most of whom have no hope of winning the match and headlining WrestleMania. It's a simple way of reminding everyone of the titular match's basic premise in a way that harkens back to the old "anything can happen" slogan. On a simpler level it gives the posters a bit of variety by featuring guys who'd otherwise never make it onto them.


This year that tradition has been sidestepped. Instead of twenty- or thirty-odd names we have Roman Reigns, WWE world title belt slung over his shoulder and a smouldering pout playing on his lips. This vision keeps Reigns strong, always a priority for WWE these days, but it also makes it tough to predict anyone but him winning the Rumble.


And it's at this point that I acknowledge that, yes, Reigns is the champ. Yes, the champ doesn't usually fight in the Rumble, what with the winner of the Rumble being awarded a world title shot at WrestleMania and all. This year that's been changed. The match is no longer for the right to challenge for the title, it's for the title.


In reality I imagine this has been done to keep the product lovely and interesting. If that's the case it's a move that's failed. WWE has become so dry and tiresome to watch that it's going to take a concerted long term plan and a great deal of effort to bring about the changes needed. Quick hits like altering the purpose of the Rumble or booking a Brock Lesnar appearance aren't enough.


In kayfabe the change was made by Vince McMahon as part of his feud with Roman Reigns. Because Roman won't conform to The Authority's idea of what a champion should be they're determined to get the title off him by stacking the deck against him. Sound familiar? It should. This is the format WWE's been using to establish main event faces since it worked with Steve Austin. The problem with it is obvious: Roman Reigns is not Austin. I don't mean this in terms of promo skills, ring work or personality (although it applies to all of them), I mean it in terms of character. The entire point of Austin was that he hated how he'd been held down by the business in general and the Mr McMahon character was the perfect foil for that.


Roman doesn't really have much of a character to speak of. There's nothing for him to be bitter or frustrated about. He has very obviously and openly been fast-tracked to the top of the company. He hasn't overcome any major setbacks and he hasn't had the real life fight to get his spot that Austin had. Which means presenting him as an underdog against malicious ol' Vinnie Mac won't get anyone anywhere: people can't accept Roman as the underdog we're told he is.


Because it's the established formula Roman seems like the only possible winner. As the babyface champion who the heel authority figures are out to screw over he is, ironically, the favourite to win. Because WWE's top lads always overcome the odds. Got to let the kids know they can believe in their heroes, right?


In fairness it's worth mentioning that had Reigns not been added to the Rumble the match it would have been decidedly light on star power (because he and someone else would have had a separate singles match). Rollins, Cena and Orton are injured. Not many people would have wanted to see the latter two win but they would have been credible contenders. That's what you want with a match with thirty participants. In addition to them Cesaro is injured. He wasn't going to win but he was popular enough to merit a lengthy stay in the match.


I have other predictions for the Rumble match that don't pertain to the winner. I expect the Wyatt clan will be responsible for Lesnar being eliminated, possibly after he's mown through all or most of them (if it's most then Bray will be the guy to survive). Kofi Kingston's annual "OMG did you see how he survived elimination?!" spot will likely involve his New Day tag partners. Maybe he'll stand on their shoulders or run across their backs or Big E will catch him or something. AJ Styles will debut to a good reaction because the Rumble is big enough to attract the sort of crowd that will know who he is and care. I can see him lasting long enough to get all his big moves in (though probs not the neck-breaking Styles Clash) before being eliminated, something the crowd will loudly boo even though 'The Phenomenal One' clearly isn't going to win the WWE world title on his first night in the company. I'm also confident not enough will be done with the comedic potential of Curtis Axel being in the Rumble.


The rest of the card is made up exclusively of title matches, which seems somehow appropriate for what has become the second most important card on the WWE calendar. Kevin Owens and Dean Ambrose will continue their run of PPV singles outings with a Last Man Standing match. It's rare for a stip like this to be busted out for the IC title these days. It's nice to see here. It can only help restore some of the lustre that's been lost over the years. It should also play to the brawl-heavy strengths of KO and 'The Lunatic Fringe'. It could end up being the best entry in their feud. Either could win because it feels like this is a rivalry of equals where either guy could win on any night, but I'll pick Ambrose to retain because he's not had the title too long.


Becky Lynch will challenge out-and-heel Charlotte 'Don't Mention Her Surname' Flair. Everything here is set up for the two women to succeed. Charlotte is playing the arrogant, snarky heel she's far better suited to at this point in her career and Lynch is established in a plucky underdog role, almost the main roster version of Bayley. They're more familiar with one another than a lot of other combinations the women's division could throw up, handy for the still-relatively-inexperienced 'Nature Girl'. And the setup of the Rumble card means that they should get plenty of time to have a good match.


A Lynch victory isn't out of the question but I think Charley retaining is far likelier. If WWE want her to be one of the key players for the Divas scene for years to come she needs to be established as someone who wins a lot. A lengthy first title reign wouldn't hurt there. She's currently at three months and while that's not insignificant it's not anything special either. A run until WrestleMania or beyond is what Charlotte needs to set her up as a somebody.


The last two matches are Kalisto challenging Alberto Del Rio for the United States championship and the Usos challenging New Day for the tag championship. Kalisto had a one day reign a few weeks ago (three in TV time) when he won the belt from ADR before losing it back ok SmackDown. Why he lost it back so soon (or at all) is a bit of a mystery. Perhaps it was to make things unpredictable. Whatever the reason I think Kalisto will get the belt again here and keep it this time.


Match quality between Kalisto and 'The Essence of Excellence' will be questionable. They've not clicked in previous meetings. They'll need to switch things up to make a good impression here. The tag title match, meanwhile, should be very good. New Day are always on form and the Usos have become one of WWE's most reliable tandems. I don't want to see a title switch but I think we might. New Day have had the belts since SummerSlam and I suspect management will be itching to changes things for change's sake.


No matter how well the undercard matches do it's the Rumble that will determine whether this show is remembered well or not. With it looking about as predictable as the last two years' have (and let's pause for a second and note that Roman Reigns has been involved in fan backlash in the closing moments of the Rumble in both of those matches) I won't be getting my hopes up on Sunday night.