Tonight Chris Sabin will make his first (televised) defence of the TNA world championship. Bully Ray is the challenger, getting his contractually obligated rematch after losing the title to Sabin on last month's X Division themed episode of Impact Wrestling (where wrestling and slogans matter). The rematch will be fought inside a steel cage so as to stop Bully's Aces and Eights gang interfering. Finally, if Bully loses he will (allegedly) never get another shot at the title.


Let's point out the obvious logic flaw first of all. The cage stip will not nullify A&E. Cast your minds back to Lockdown in March. In the main event of that show Bully Ray defeated Jeff Hardy for the TNA title with help from the Aces. The steel didn't stop them then so why should we believe it will stop them now?


The other big problem this match has is that everyone expects Bully Ray to win. That was the case the moment the rematch was announced and adding the no more title shots stipulation has only added to that.


There’s good reason to expect ‘Calfzilla’ to win. The Bully v Sabin feud has very clearly been a time killer from the very beginning. It's the drawback of the Bound For Glory series. Western wrestling fans expect world titles defended roughly once a month. With the BFG series running from June to September and involving TNA's most credible challengers it makes booking world title programmes hard: the champ can’t defend against someone in the series because that negates the purpose of the series, so he has to kill time with mid-card talent.


TNA's answer, as we've seen with Sabin and last year with Austin Aries, has been to allow the X Division champion to vacate their title and step into the main event. But this is not a solution because anyone familiar with the way wrestling works can see that they're not going to become a headline mainstay unless they have the required qualities. 'A Double' did. Chris Sabin does not.


This is not to belittle Sabin. He's a talented wrestler, he's just not cut from the main event cloth. He looks, wrestles and carries himself like a mid-carder. He can’t cut a half-decent promo, let alone a promo befitting a world title feud. He looks like he belongs in the X scene. He does not look like he should be at the top of the card. 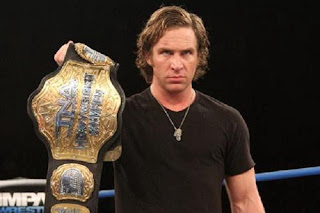 Chris Sabin: lacking in main event aura
I'd feel this way no matter how his reign had come about but I will say that TNA didn't do Sabin any favours when laying out his victory last month. After selling for ten minutes Sabin got hold of the rubber hammer Aces member Mr Anderson had introduced to proceedings, clobbered his foe with it and then fluked a rollup.


The rollup was inoffensive enough. Considering the size difference in the match it was a logical move for the match to finish on. But coupled with the hammer blow and selling it made Sabin look weak. He should have entered a spirited, gutsy performance in which he peppered Bully with high flying moves and just survived all of his big moves.


Using the hammer, even in a turning the tables scenario, was the move of a heel and only served to underline that Sabin could not win a fair fight. If the hammer had to come into play (and there's an argument for its use because TNA need to keep Bully looking strong for his presumed Bound For Glory title match) it should have been an Aces member smashing Bully by accident and then Sabin following up with a move or a rollup to score the win.


The poor presentation has continued since Destination X. Sabin has been presented as a fluke champion and played second fiddle to the endless crushing boredom that is the Aces and Eights v TNA-slash-Main Event Mafia feud. Reducing a first time champion to the role of bit part player in a feud involving several big names does him no favours. It doesn't do the title any good either.


Some people have suggested that Sabin has been given the title reign as a reward for his years of loyalty and dedication. I couldn't hope that's not the case more. World titles shouldn't be handed out based on terms of service. They should be awarded based on how credible a wrestler will be in the role of champion. If TNA want to award Sabin's loyalty and hard work great, they should. But it shouldn't come in the form of a reign with what is supposed to be their most prestigious prize. Give him a cash bonus or a lengthy run with the X Division belt. Don't present him as the number one man in the promotion unless you're willing and able to fully get behind him in the role.


Adding to the frustration is that TNA had alternatives. They could have had Jeff Jarrett return to work the summer feud with Bully. The storyline there is obvious: ‘Double J’ has returned from exile to save the company he built from Aces and Eights.


They could have done something interesting with James Storm and Bully. Storm’s the only former world champ under the age of forty not to be involved in the BFG series, his omission coming because of his tag title reign alongside Gunner. He has the status within TNA to be involved in a world title feud. He and Bully could have had some great matches and Gunner could have been used for some interesting tag team matches and evening odds. There would have been a natural Gunner and Storm v Team 3D match to book as well.


There were plenty of things TNA could have done that would have been just as good, if not better, than slinging the belt on Sabin for a few weeks. In the long run I think the title reign is going to do Sabin more harm than good. He's unlikely to ever have a second reign, and if he does happen across one it will in all likelihood come about under circumstances similar to his first. Once he loses the title back to Bully and the feud wraps up Sabin is destined to slip back down the card.


That's only going to degrade the world championship because it will have been worn by a mid-carder. Meanwhile Sabin himself will look like he was out of his league and has been sent packing to his rightful spot. TNA really needs to get a grasp on the star building process before they bungle a main event push for everyone on the roster.
Posted by Dave at 17:39