He may have guaranteed himself a future World Heavyweight title match at Money in the Bank but Damien Sandow is far from ready for a title reign. As things stand right now he is a prominent member of the roster, deemed good enough to have televised matches with the likes of Sheamus and Randy Orton but not high up enough on the pecking order to actually defeat them. You only need to check his win-loss record since MITB to see that his status has not changed. Briefcase and new feud aside little has changed for ‘The Lord of Literacy’.


Luckily for him there’s no rush for things to change. Winning the Money in the Bank briefcase is as much a guarantee that WWE’S creative team are going to spend time on him as it is of a future world title shot. 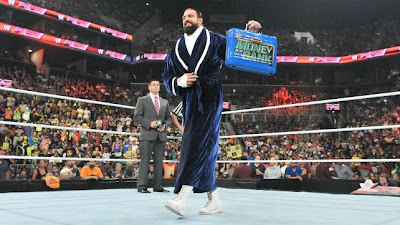 Damien Sandow, the preeniest 'Mr Money in the Bank' ever?
WWE have until next July at the latest to prep Sandow for a run as the World Heavyweight champion. I don’t think they’ll take that long. His current rivalry with former best friend and Rhodes Scholar tag team partner Cody Rhodes should help there. Having a memorable feud opposite Rhodes should help ‘The Intellectual Saviour’ stand out as a man on the ascent. Winning or losing the feud isn’t that important, what matters is that the two men have memorable moments while they’re working opposite each other.


The real key to getting Sandow over as a headliner will be moving him away from his current TV filler enhancement talent role. That shouldn’t be a problem for WWE. They have other guys that can and do fill the role. ‘The Duke of Decency’ can pick up a few more wins here and there to ensure he’s seen as a winner by the time he challenges for the strap.


Sandow could go from the Rhodes feud to another before taking his title match, but that’s not a necessity. In fact WWE have hinted at a potential storyline that I think could work very well that would see Sandow becoming HC while still involved with Rhodes. Rhodes has stated on commentary that he wants to become the World Heavyweight champion before Sandow. And really, there’s nothing to stop this happening. Sandow has a briefcase but that doesn’t mean nobody else on the roster can challenge for the big gold belt. Cody could quite easily enter into and win a number one contenders match, the traditional route to the top.


ADR would be the ideal opponent for Rhodes as he’s a heel and someone ‘The Moustachioed One’ hasn’t ever faced in a significant match (or, possibly, at all). That he’s expected to head into a programme with Ricardo Rodriguez would even allow WWE to present what could be an interesting Alberto and Damien v Cody and Ricardo match. Rhodes could be booked to defeat Del Rio for the title only to have Sandow cash-in and take the gold away from him.


This would instantly get heat on Sandow, give their feud a shot in the arm, and cast Rhodes in a sympathetic light. That’s not going to do a babyface any harm at all.

A deliciously emotive performance from Cody Rhodes
I suggested an idea similar (or identical, depending on your point of view) idea last year with Dolph Ziggler and Cody Rhodes. You can remind yourselves of that here. It would work better with Rhodes and Sandow as the issue between Sandow and Rhodes is far more personal. There’s a feud already in place rather than one being manufactured.


Switching the belt onto Rhodes and then Sandow would trial two men who deserve it at the top of the card. It would create compelling television and be a sensible, logical story to follow. Even if only one of them did well enough to rise up the card on a permanent basis it would be worthwhile. Whether or not these facts will count for or against it with WWE is anyone’s guess, but I’m not going to hold my breath.
Posted by Dave at 15:25