Over the last few years Davey Richards has intimated he’s going to quit Ring of Honor on two occasions. The first was in 2010 when he stated outright that he was going to leave wrestling behind to become a full-time fire-fighter. That didn’t happen. He instead re-signed with Ring of Honor and was front and centre for the horrendous reign of error inflicted on the company by Jim Cornette.


The second time was when he signed his current ROH deal. He announced that the contract lasted through to August of this year and when it expired he would take a look at his options. That’s wrestler speak for seeing if WWE’s interested.


And in fairness who can blame the guy? Davey Richards has been slogging his guts out as a wrestler since 2004. In that time he’s built up a reputation for working hard and putting on spirited, energetic performances. He’s travelled the world learning his craft and is at an age where he’s probably thinking about whether he’s ready to trade in the creative freedom of the indies for the opportunities only WWE can offer.


With this in mind it should come as no surprise that Richards and his American Wolves tag team partner Eddie Edwards are rumoured to be among the names attending a WWE tryout camp at the company’s new training facility in Florida. It’s these camps that WWE uses to determine whether or not prospective wrestlers warrant being offered a developmental contract and spot in NXT. 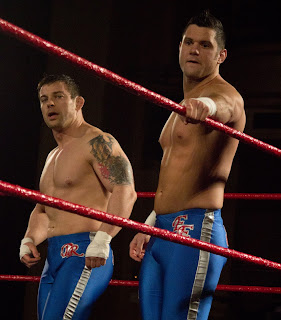 The American Wolves: future NXT tag team champions?
I don’t want to bang on about how good an idea it would be to sign Richards and Edwards. Anyone who’s seen them wrestle will know they could be an asset to WWE’s product, either as a tag team or as singles competitors (and the latter is far likelier). Both would have to work at cultivating suitable personas, their current approach is fine for ROH but wouldn’t go over well with WWE management or audiences. But that’s the purpose of NXT. Were they to sign developmental contracts they’d be amongst the top guys at that level immediately, and their deficiencies in the personality department could be improved.


The Wolves are booked on ROH shows up to September 28th. Shows after that haven’t yet had appearance lists attached to them. As it’s been reported that the Wolves’ contracts expired in August I have to assume that they’ve either signed contract extensions or verbally agreed to appear at a few more shows.


Worth noting is that only one show actually has them listed in a match: at Death Before Dishonor XI they will challenge the Forever Hooligans for the IWGP junior tag titles. That the match has been announced makes me think whatever agreement the Wolves have in place covers that show. It’s reasonable to assume that the TV taping the next day could be covered by this too, as it will be held at the same venue.


Should Richards and Edwards get WWE developmental deals it’s entirely possible that those shows could be their last. Should that end up being the case I hope Ring of Honor breaks their recent trend and provides a fitting send off for Richards and Edwards. By that I don’t mean making sure they win, rather that they should be given enough time to ensure their final ROH match is an absolute classic.


Considering ROH bills itself as a promotion that promotes in-ring ability over anything else this should be a standard approach, but it’s not and hasn’t been for years. The last time a guy was allowed to go out on a tremendous match was El Generico at Final Battle 2012.But he wasn’t a regular at the time and that felt more like ROH cashing in on a popular feud one final time more than allowing Rami Sebei to give fans a reason to remember him fondly.


The last regulars I remember being given a chance to leave on a classic in a spot that befitted their standing in the company and its history were Nigel McGuinnes and Bryan Danielson. That was back in September 2009. Since then Richards and Edwards have been amongst the names that have kept the company going. If any performers deserve to go out on a high it’s them.
Posted by Dave at 10:14