Well that didn't last long did it.


The man formerly known as Michael McGillicutty returned to our screens as the brand new Paul Heyman Guy on May 20th. His first match under the new moniker was against Triple H, a match he won by count out (a win’s a win for a mid-card heel). At Payback he dethroned Wade Barrett, in a triple threat match also involving The Miz, for the Intercontinental title. As he celebrated the commentary team talked about how it was the championship his father had held before him and generally gushed to such an extent that it seemed certain he was being fast-tracked to the top. Being given wacky wins over Triple H and holding the Intercontinental title may not mean much in the grand scheme of things but they were signs that WWE was interested in and supportive of Axel.


After successfully defending his prize against Barrett on the June 21st SmackDown Axel’s next big match was teaming with CM Punk to take on the Prime Time Players. The story of the match was that Punk didn’t trust Axel and didn’t want to team with him but tolerated him on the apron due to his friendship with Paul Heyman. It was a supporting role for Axel but he still benefited from the link to a star of Punk’s stature. At the end of the match he was portrayed as a glory-hunter when he tagged himself into the match for the winning pinfall after Punk had hit Darren Young with a Go To Sleep. It wasn’t a huge win but it was a nice bit of character work.


After that Axel inexplicably slipped down the card.


He defeated The Miz in a bland match at Money in the Bank. Later in the evening he was on run-in duty, attacking CM Punk during the WWE championship Money in the Bank ladder battle. That earned him a GTS and brought Heyman out to ringside so that we could all witness his turn on Punk.


That run-in was the last thing of relevance that Axel did for a month. It took just two months for WWE to lose interest in him and his push.


Axel had seemed promising when he was reintroduced to our screens. He got positive responses during his reintroductory segment and in his title winning performance at Payback. True they were more to do with his heritage and remixed entrance music than him as a performer in his own right, but they were still reactions linked to him. Many WWE wrestlers don’t receive anything when they perform.


The reason he found himself in a reduced role for a month was because Paul Heyman’s time was taken up feuding with CM Punk alongside Brock Lesnar. But now that Lesnar’s disappeared again, until the WrestleMania build begins next year if rumours are to be believed, Axel has found himself being used again.


Having Heyman appear in Punk and Lesnar related promos and accompanying Axel to ringside was probably considered too much by management. I can sort of see their point: it would have risked overloading us on Heyman. And it would also raise the question of why Punk wasn’t at ringside to attack him every time Axel wrestled. It was easier for them to simply reduce Axel for a bit. 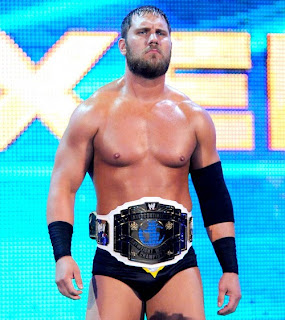 Is Curtis Axel a future star?
Wrestling Punk is a boost for Axel. For Punk it’s a comedown but it’s also a logical continuation of his feud with Heyman. The two are scheduled to face one another on tonight’s RAW. I imagine they’ll end up tangling at Night of Champions too. I can’t imagine (or I don’t want to imagine, at least) WWE putting the IC belt on Punk which means Axel could be in line for an interference-assisted victory over ‘The Second City Saint’, possibly at Night of Champions. That would be another step up for the son of Perfect.


This start-stop approach to pushes is normal. The WWE method of elevating guys has changed over the years. At one point, many years ago now, a guy would be brought in and be pushed consistently for months on end. He’d be given plenty of chances to make it in the role that had been chosen for him and the plug would only be pulled after several failures.


These days guys will find themselves pushed hard and fast for two weeks and then forgotten about for the next two. It’s not an approach that makes the star building process any easier but it does seem to have its advantages. The constant halting of big pushes for CM Punk, Dolph Ziggler and Daniel Bryan meant that their main event pushes were incredibly successful when they did finally roll around. I can’t imagine Bryan would have become this over had he not been kept down in the middle of the card for several years.


If Axel can weather the stop-start storm then perhaps, in two or three years, WWE will activate a massive push for him. It’s not an ideal way of creating new stars. But it’s a way. More importantly, it’s the way WWE have chosen right now. If Axel wants to succeed he’ll have to get used to it.
Posted by Dave at 10:57