Two weeks from WrestleMania and WWE is still producing RAW episodes with a lot of filler. The company and the people who run it have all been around long enough for this not to be concerning. It's WWE's system and they know what they're doing. It doesn't mean WrestleMania is going to suffer. Unfortunately it doesn't make for interesting viewing though either. Regardless of what pay-per-view's next on the calendar WWE should be aiming to give us a solid show every week.

From the irrelevant filler file: Ryback trounced SmackDown main eventers 3MB; Mark Henry beat fearsome combo Jimmy and Jey Uso; Antonio Cesaro defeated World Heavyweight champion Alberto Del Rio via count out in a four minute disappointment; and The Shield were built up for WrestleMania by being put over Justin Gabriel, Zack Ryder and The (Not So) Great Khali. All of this was done for a reason, but it was boring. All involved could have been given something more interesting to do and the same effect (preparing for 'Mania) could have been achieved.

Slightly better were the match between The Miz and Wade Barrett and the continuation of Chris Jericho's feud with Fan... Dan... Go (you've got to let the vowels breathe). 'The Awesome One' beat Barrett in order to set up their long rumoured Intercontinental title bout at WM29. The match was pretty decent. That bodes well for the big show, although they're going to get a shorter run time there. 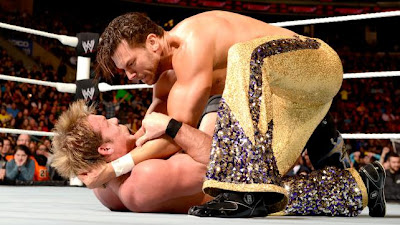 Despite my aversion to 'Y2J' and the ballroom dancer's dispute before it began I'm pleased that the programme has been well constructed so far. Those rumours that Vince McMahon was personally working on the Fandango character days after hip surgery must have been true. Right now they've got the third most logical 'Mania rivalry behind Lesnar v Triple H and Del Rio v Swagger. Who'd have guessed that a month ago?

Speaking of which, both of those feuds saw advancement on Monday. Swagger distracted ADR. It was perfunctory advancement. Meanwhile 'The Game' cut a short and forgettable promo about how you should always expect to wrestle your last match against a guy like 'The Pain'. He also said he was going to WrestleMania to fight, not to wrestle. Maybe they should get some FightMania graphics prepped for that match.

Not every WrestleMania match is being treated so well. Undertaker v CM Punk is a prime example. The feud that should have been about Punk's continued demands for respect and proving to "the WWE Universe" that he's the best has instead revolved around a prop urn purportedly containing the ashes of 'The Phenom's' former manager Paul Bearer.


That Bearer would have approved of this and that his family have signed off on his involvement in the storyline isn't the point. If it'd truly what Bill 'Paul Bearer' Moody would have wanted that's fine. It's a missed opportunity. The match itself will still be great, I'm sure. The approach to it has been dull. Promos from Punk about how ending The Streak will force everyone to respect him would have been so much better.

RAW opened with Punk cutting what was by his standards a snore of a promo. He said he'd gotten under 'The Dead Man's' skin. He said The Streak could have gone on forever if Undertaker hadn't come up against Punk. 'Taker showed up and pummelled him until Punk escaped the ring and ran away. It was as dreary as it sounds.

It's difficult to care about any of this. We all know Punk's losing at WrestleMania. The draw of the feud was seeing the respect-obsessed 'Best in the World' of the last eight months come up against the man who has earned more respect than anyone in company history over his twenty-three year stay. It was that build as much as the match itself that appealed about Punk challenging The Streak. Acknowledging the death of Paul Bearer was absolutely the right thing to do, and the tribute they aired was touching. But his involvement should have ended there. 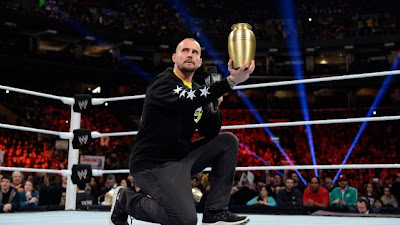 Nobody needs to see more of this

Closing the show was a debate between WrestleMania opponents (twice in a lifetime, folks!) John Cena and The Rock. They were given questions by Dusty Rhodes, Booker T, Mick Foley and Bret Hart with Jerry Lawler on compare duty (which sounds like a poor American version of I'm Sorry I Haven't A Clue). Ric Flair was originally meant to be a part of this segment too. My assumption is that Booker replaced him. In case you've not heard a blood clot in 'The Nature Boy's' leg concerned WWE's medical staff. They sent him to a hospital, who sent him home. It's unlikely he'd have contributed a great deal. Best to put health first, 'Naitch'.

Mick Foley opened by asking John Cena if he was prepared to deal with the regret another loss to The Rock would bring him. Cena didn't give a direct answer. He was never going to. This was an excuse to have Cena and Rock cut promos on each other in a moderately fresh environment. Instead he flanneled about how beating 'The Brahma Bull' is "the big one" for him. If he can't do it fans will greet him with derision in every arena in the country (and presumably the world). He admitted he's statistically good but basically his point was beating The Rock is his greatest challenge.

All of which cheerfully ignored the fact that fans already greet Cena with derision on a regular basis.

Rock responded with a story about growing up near Philadelphia (which is where RAW was being held). If we're to believe all of Rock's stories then he must have had about fourteen different childhoods.

Bret Hart's question was more of a statement. He said watching Rock and Cena verbally swipe at each other last year reminded him of himself and Shawn Michaels. ‘The Hitman’ was disappointed by the bad blood. Rock said he respected Cena because he beat him at WrestleMania XXVIII fair and square and 'The Franchise' didn't complain. He took his loss like a man, said Rocky. Which is true. Cena said Rock has proven his dedication to wrestling by winning the WWE championship. A weird leap of logic, but that's Cena.

Booker T's wanted to know why Cena says he has to beat The Rock at WrestleMania. In fairness Cena had addressed this point when answering the night's first question. His said simply that he'll beat The Rock because he has to.

Rock wasn't satisfied with that answer even though, when you get right down to it, within the parameters of kayfabe every wrestler has to win every match because they have to. Nevertheless Cena was pushed for further comment and gave it. He stated that Rock was the only man who'd ever gotten into his head, which caused him to make a mistake during their previous match. That mistake was going for a Rock Bottom on The Rock and it cost him the match. In Cena's mind if he hadn't done that he'd have won and proven he's better than Rock, because he is (apparently) better than The Rock. Which would make a nice tag line for this year's show, WrestleMania XXIX: Better Than The Rock.

Naturally Rock didn't take kindly to Cena's statement. He argued that if Cena had had him beaten he'd have beaten him. He lost, so he didn't have The Rock beaten. He dredged up Flair's old "to be the man... wooooooo... you gotta beat the man" line and told Cena he'll never win because he's not the man.

'The Dream' piped up. Cena said he wanted to provide The Rock with a loss that will haunt him. Rock retorted that he's not built that way. He'll still be 'The People's Champion' on Monday 8 while Cena will be asking himself why he lost again (and eating Fruity Pebbles apparently).

There was a staredown. Cena went for an AA but Rock slipped out and dished out a Rock Bottom instead. Rock left the ring. Cena busted out his patented kicked puppy look to show that he's really up against it at WrestleMania and is beginning to doubt he can beat 'The Great One'. It would have been the ideal way to end the pre-'Mania RAW. 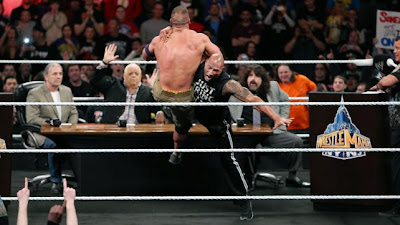 Great reactions from the guys at the table: Foley seems to be getting up, Hart's just staring into space and Dusty's doing  dance

The point of the segment seemed to be to show that Cena hadn't taken the loss as well as originally believed. That's why they had Rock acknowledge Cena's acceptance of losing early on, before Cena unravelled on the question of why he must win. It wasn't quite pulled off, but it was a good attempt and makes for a logical story. That's important with any match, particularly a WrestleMania main event.

The main event Q&A was a success because it worked. It got done what it needed to. Very little else on the show can make that boast.