Two weeks ago at ROH's 11th Anniversary iPPV Kyle O'Reilly and Bobby Fish won the promotion’s world tag team championship. I said at the time that this was a surprising and positive title switch. What I didn't say is that I think reDRagon are the ideal team to head up the tag team division, both short and long term.

I've been calling for Ring of Honor to do something with O'Reilly since last year. When he renounced Davey Richards as his mentor at Best in the World (moments before ‘The Lone Wolf’ had a world title rematch with Kevin Steen) I thought something major was going to follow. I was wrong. O'Reilly spent the majority of the remainder of 2012 wrestling in meaningless matches which were rarely long enough to give him a chance to stand out. This instead of building him up to be one of the company’s leading stars.

As the year came to a close O'Reilly was paired up with Bobby Fish for a tag match opposite the reunited American Wolves at Final Battle. It became clear at the start of 2013 that that hadn't been a throwaway addition to the final ROH show of the year. They would be a regular combo.

There are a few reasons reDRagon are the ideal team to be on top right now. First and foremost they're both very good wrestlers. That's obviously a good attribute to have in any wrestling promotion. It’s particularly useful in Ring of Honor, where work rate is what fans looks for above everything else.

They're a fresh pairing too. The majority of the other teams on the roster have yet to face them in a regular encounter. The return to bringing in non-regulars for select shows will mean even more fresh matches involving reDRagon. The Forever Hooligans, BLKOUT, the Young Bucks and the Super Smash Bros would be my top choices from outside ROH to come in and face the champs. If the recently announced working agreement with Pro Wrestling NOAH is going to be an ongoing thing then that could mean even more great matches for the pair. 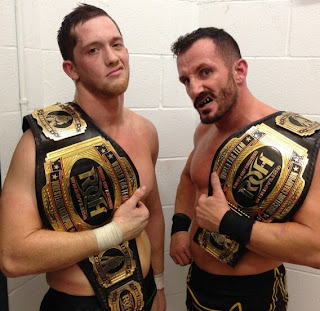 A tip for Mr O'Reilly: work on your sneer

There's also the established rivalry with the American Wolves. It took a while but the Kyle and Davey dispute finally paid off. The Wolves versus reDRagon was a hot, well received encounter. The Wolves won, which should guarantee them a future match for the tag belts. More matches of that calibre wouldn’t be a bad thing. There's a lot that could be done in a prolonged reDRagon v Wolves programme. The history between Davey, Eddie and Kyle could generate months of material.

What else is nice about this scenario is that there's not one team who will clearly be the next champions. The American Wolves are certainly favourites but they haven't been set up as the men who will definitely dethrone Fish and O'Reilly. It could just as easily be one of the teams mentioned above, given a shot out of the blue. The Briscoes could add yet another reign to their tally. Or the men I've been saying should be the ROH tag champs for over six months, the C&C Wrestle Factory, could finally reach the top. Even if they don't win I expect Coleman and Alexander to get a title match sometime soon, and to have a noteworthy outing when they do.

The tag team division is just one area of ROH that Delirious has improved since taking control of the booking. It's an area that was particularly drab under Cornette so its improvement stands out more. I hope it keeps getting better.