Where did things start to go wrong for Rey Mysterio?


When I started this blog two years ago he was one of WWE’s most reliable acts. He was a guy known for being able to get a good match from anyone, constantly used to reheat fellow headliners and provide great matches for what may otherwise have been dreary pay-per-views.


In addition to his abilities in the ring another reason Rey was so respected was the fact that he’d made it to the top as a result of hard work. He’d never been given the huge push that some of his peers had benefited from. He was used prominently from his debut onwards but he was never particularly protected. He simply did what WWE always claims it wants its wrestlers to do: make the most of what time they’re given and build a rapport with the fans.


A perfect example of the esteem Mysterio was held in a few years ago are the competitive matches he had with Batista and Undertaker. Both his opponents were far larger and yet he was treated as their equal. In the size-driven WWE that treatment spoke volumes.


Over the last two years things have changed. As 2010 came to a close the writing team apparently had no idea what to do with Reymond next and so took the novel approach of allowing him to pick his next opponent. The man in the mask selected Cody Rhodes for a WrestleMania tussle. They had a creative and well received feud that took in not just ‘The Showcase of the Immortals’ but also a rematch at Extreme Rules.


In hindsight the end of the Rhodes programme is where things truly dropped off for Rey. Three weeks after Extreme Rules Rey was on the losing end of a show opening contest opposite R-Truth at Over The Limit. There was no real reason for the two to wrestle. It was an excuse to do something with the newly heel Truth.


Mysterio found himself playing bit and supporting parts for most of the rest of the year. Even his WWE championship win on July 25th did nothing to reinvigorate him. He got the belt that night because he was a more credible option than The Miz. Or perhaps WWE just wanted to get his name in the history books as the lightest WWE champ ever. Don’t rule that out, they do things like that.


Mysterio won the title at the beginning of RAW and lost it in the main event to John Cena (who else?). He was written off of television the next month, after competing in a meaningless six man tag match at SummerSlam, another wasted opportunity considering his popularity on the west coast. 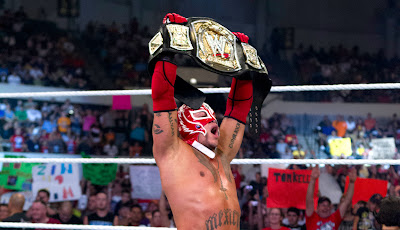 This didn't last long
It could be argued that his treatment during this period put Rey off of WWE. Rey had spent years putting others over and entering great performances. That nobody could be bothered to come up with anything for him to do other than half-heartedly rerun his feud with Alberto Del Rio and keep John Cena’s title warm would have irked anyone.


Things didn’t get any better last year. Rey returned over the summer and ended up falling into a partnership with Sin Cara. That could have led to something good at this year’s WrestleMania, either a singles match between the teammates or a tag title match, had things worked out differently. Unfortunately since Rey returned he’s worked an erratic schedule that’s seen him absent for long stretches.


Which is where my sympathy runs out.


I could understand if Rey was disenfranchised at his poor treatment in 2011 but since he came back last year it’s felt like he can’t be bothered. His matches have remained good but occasionally it has felt like he was going through the motions. He came and went so often that he became a disruption to programming. Nobody was able to propose long term plans involving him because it wasn’t know when he’d be available.


I’m convinced that his frequent and seemingly unpredictable absences were a contributing factor to the disappointing bungling of the tag team division late last year. Had WWE known they would have regular, unfettered access to the former cruiserweight champ they may have been willing to formulate plans for the league.


The rumour is that Mysterio has had personal issues to deal with. To me this comes across as someone pulling a sickie. If those personal issues were truly that bad then Mysterio would have gone home and stayed home, he wouldn’t have gone home, come back to work a few dates, gone home and returned again (and so on). Whatever these issues are I have sympathy for him, but if they’re as bad as he’s made out he’s almost certainly making matters worse with his continual comings and goings. I know he’s not doing WWE’s programming any favours.


The feeling I have is that Mysterio is tired of working a full time schedule. He’s been an active wrestler since his teens. He has essentially been on the road for over twenty years, with his only major time off being when he’s suffered from injuries. Perhaps WWE don’t value him as highly as they once did and don’t want to pay him big bucks for a reduced schedule.


Whatever the case is I think the days of Mysterio being a regular headliner in WWE are over. Either he’ll continue with this bizarre back-and-forth approach that has characterised his run since last summer or he’ll negotiate a part time deal that grants him the time off I believe he wants and sees him wrestling on key TV shows and pay-per-views. I hope it’s the latter.
Posted by Dave at 11:01