When Daniel Bryan and Kane won the WWE tag team titles at last September's Night of Champions I didn't think I'd still be discussing their reign seven months later. As high profile wrestlers doing the feuding partners routine it seemed safe to assume that the pair would drop the gold to a more conventional combo after a short run together, going on either to resume their feud or being given something new to do. The latter of those is what I was hoping for.

Instead Bryan and Kane have continued to win as a team and keep hold of the straps long after their appeal has waned. The smart thing to do would have been introducing one or two fresh teams to the division while people were still interested in Team Hell No as a unit, leaving guys to inherit a hot and interesting division after the champs lost and split. The Rhodes Scholars were introduced but their push has been fumbled even more badly than Kane and Bryan's. They should have been the guys to replace 'The Big Red Machine' and 'The World's Toughest Vegan'. 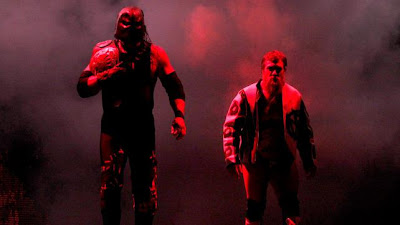 Heyman describes Lesnar and Punk as 'The Beast' and 'The Best', epithets that are applicable here too

The Rhodes Scholars have been harmed by their ridiculous split and reunion between Royal Rumble and Elimination Chamber. The Prime Time Players, a team that has seemed on the cusp of winning the tag belts for a year now, have been moved away from the champions. They're wrestling just as much as they ever have but they're no longer being presented as any sort of threat to the tag titles.

Epico and Primo seem unlikely to get a win over genuine stars any time in the foreseeable future. Brodus Clay and Tensai (or Sweet T) have the size to be taken seriously, and a slightly more advantageous spot on the card than E&P, but even they seem unlikely to be the next champions.

The likeliest successors to Kane and Bryan right now appear to be Dolph Ziggler and Big E Langston. Not only are they good enough wrestlers to be the champions but Ziggler's star profile gives them a very strong chance. It's status on the roster, more than anything else, that determines title reigns in WWE.

What makes a Dolph and Big E win at WrestleMania slightly least likely is the Money in the Bank briefcase. 'The Show Off' is expected to cash in at 'Mania and leave as World Heavyweight champion. Making DZ a double champion would be a great way to make him look a star and could even lead to a return of his late 2011 gimmick of working twice on each pay-per-views. Unfortunately making someone a double champion would go against WWE's current approach to championship. Having Ziggler as a tag champ could also dilute the importance of his WHC win, and the prestige of that title is getting pretty flimsy as it is.

But if it's not Langston and Ziggler that beat Team Hell No then who will?