I remember reading about the first ever Ring of Honor show in Power Slam magazine. I was mainly drawn to it because of the prominent photograph of Eddie Guerrero. I wasn’t especially interested in his opponent, Super Crazy. I wasn’t at all concerned by anybody else on the card. I’d never heard of Bryan Danielson, Christopher Daniels, Spanky or Homicide. I’d only ever come across Low Ki thanks to his work as a WWF enhancement talent on weekend show Metal (remember that?). But I read the article and was intrigued. It sounded like The Era of Honor Begins had been a good show.


Over the following months I followed the story of ROH’s rise and the crowning of their first champion online and in Power Slam. I wanted to see a Ring of Honor show but as far as I was aware video tapes weren’t region free (I’m still not sure on this but I’m still fairly sure they’re not). DVD players hadn’t become widespread enough for me to have one by this point.


By 2004 I had a DVD player. I bought an ROH show on eBay, after making sure that their DVDs were definitely region free (they were and are, so feel free to buy some). I decided what to buy based on a combination of price and who was on the card. I got both Weekend of Thunder show for six quid. The price was the biggest factor. CM Punk wrestling was a secondary one. I’d seen his name mentioned a lot in PS and online and had seen him wrestle at British Uprising 2. I knew him being on each DVD guaranteed me at least two good matches.


It’s been eleven years since ROH started up. That landmark will be celebrated with the imaginatively titled 11th Anniversary Show on Saturday night. After the reign of (t)error inflicted on the company, and the fans, by Evil Overlord Jim Cornette ROH has become enjoyable again over the last few months, so there’s every chance TEAS will be a good show. 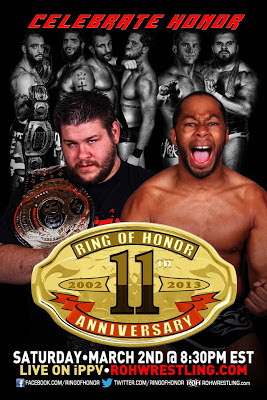 Eleven years of men who don't feel comfortable posing for wrestling posters
Let’s start at the bottom of the card and work our way up.


The SCUM (I’m still not sure what that’s supposed to stand for) team of Jimmy Jacobs and Steve Corino will take on the C&C Wrestle Factory. These four clashed in the semi-finals of last year’s title tournament. I wanted Coleman and Alexander to win. They lost. I’m hopeful that part of the reason for this bout taking place is to grant C&C the win they deserved to take last year at Death Before Dishonor X. They remain a pair that could be used as the future of ROH.


In another middle-of-the-card outing ‘The Outlaw’ Charlie Haas will clash with BJ Whitmer. I’m not a big Whitmer fan and I’m not especially interested in Haas as a singles wrestler. Without Shelton Benjamin at his side I don’t really think he has a huge amount to offer ROH, although his character has grown on me.


This match is happening because of the well-established troubles between Wrestling’s Greatest Tag Team and Whitmer and Rhett Titus. That’s another aspect of the current ROH product I’m not overly keen on. So really there’s not much about Whitmer v Haas that interests me. I’m picking Haas to win, because for some reason he’s used as a formidable singles force.


Former House of Truth pals Roderick Strong and Michael Elgin will wrestle under two-out-of-three falls rules. Truth Martini, who we were told would retire at the end of 2012 but didn’t, is barred from ringside. That should mean we can expect a victory for Elgin, seeing as the reason he fell to Strong at Final Battle was outside interference from Martini.


Usually when a two-out-of-three falls bout is made fans can expect to see the third fall. I don’t think that’s necessarily the case here. Ring of Honor is the sort of company that isn’t afraid to brook convention, and giving ‘Unbreakable’ two straight decisions with Strong getting none would do a lot to rehabilitate him.


And he does need rehabilitating. Elgin was handled incredibly badly by Cornette. He went from being a hot prospect that everyone wanted to see ascend to the top of the card to a generic dude who likes power moves. Not shoving him to the top of the card was a huge mistake. I’m hopeful that Delirious is going to treat him differently and as such I’m expecting a decisive Elgin victory.


Truth Martini may or may not appear during the Strong v Elgin match. Just because he’s banned from ringside doesn’t mean he won’t sneak in. One match he’ll definitely be at ringside for is Adam Cole’s TV championship defence against Matt Taven. Because Martini is now Taven’s manager.


A title change isn’t impossible. It would be a shocking result, which is usually a good thing on a big show like this. Cole’s faced everyone he’s realistically going to as TV champ. A surprise loss of the title would be a great way of launching a Taven push and would free Cole up for a move up the card. Or to NXT.


I’m not going to predict that though. It would be a nice surprise and a way of creating a new star and keeping Martini relevant but I think Cole will have the belt for a bit longer. I’m looking forward to this match. I think it could be very good.


The ROH tag team titles will be defended by the eight time champion Mark and Jay Briscoe. Their opponents will be Bobby Fish and Kyle O'Reilly. The challengers have the team name redDRagon. I missed the reason for this team name, if one was given. Given the emphasis of the DR of dragon I’ll assume it’s somehow related to Davey Richards.

This is likely to be one of the better matches of the show. For all they're overexposure 'Dem Boys' are a reliable double act who are at their best when facing opponents the audience reacts strongly to. O'Reilly and Fish fit the bill there.

What's a little annoying about this new team is that O'Reilly was only split from a regular team with Adam Cole this time last year. While Cole's gone on to become the TV champ O'Reilly has floundered. His heel turn was rushed and his split from mentor Davey Richards still feels underdeveloped eight months after it happened. O'Reilly's been wasted over the last year.

On the bright side he's being used properly now and he and Fish can be just as useful to the tag division as Futureshock would have been had they stayed together. I could see this match going either way. There's no obvious favourite. I'll pick the Briscoes though, mainly because they're the Briscoes and they win a lot. Hopefully O'Reilly and Fish get to win a rematch.

The reunited American Wolves will be in a "special attraction" match (a very indy term) against The Forever Hooligans. Firstly I want to state that Forever Hooligans is a pretty cool name for a tag team. Things like that are important. The team is made up of former WWE developmental prospect and NJPW regular Alex Koslov and the former ROH tag team championship partner of Davey Richards, Rocky Romero. Expect a lot to be made of the history between Romero and Richards by the commentary team. To the point where it becomes annoying.

This match could be the best of the show. The Wolves have had enough time to get reacquainted with teaming and both men are slick performers. The Hooligans are equally good. A fast match stacked with double team moves and impressive counters is what I'm hoping for.

I'm expecting the Wolves to win this match. A third title reign for them seems likely for later in the year. A loss here would only be a setback to that. I don't think it's likely but I’d love Romero and Koslov to become regulars. They'd be a tremendous asset to the promotion.

Finally there's the ROH world championship being defended in the main event. Champion Kevin Steen will wrestle Jay Lethal. It's a rematch from last October's Killer Instinct show. There Steen trash-talked Jay Letha’s mother (who was chilling at ringside) to send Lethal over the edge and cause a double DQ. Lethal went nuts and started smashing the set up in a Bret Hart-inspired worked shoot rampage. It was a peculiar direction for the naturally likeable Lethal to be sent in but it did end up with getting Corney written off TV so it wasn't all bad.

As a result of Lethal's unstable display Steen managed to get a ruling put in place that stated he'd never have to face Lethal in ROH. But then (shock, horror!) Lethal won the 2012 Survival of the Fittest, the winner of which receives an ROH world title match at a time of their choosing (although they have to have it officially sanctioned in advance, it's not like WWE's Money in the Bank gimmick). Lethal managed to get Steen to agree to give him his one and only title shot at the 11th Anniversary Show.

Yes, it's another "the challenger must win this match" scenario in wrestling! Imaginative, no?

'Mr Wrestling' has been as reliable as any precious ROH champ when it comes to entering great matches. This match should be no different. Lethal has been in ROH long enough to be a credible challenger. He's one of the best wrestlers in ROH, and Delirious has smartly edged away from many of the heelish traits Lethal was displaying while Cornette was still running things. Lethal’s trouble is that he's just not believable as an anarchic tough guy, especially one that Kevin Steen, of all people, is supposed to be scared of.

As with many other matches on the card I don't think there's a clear winner for the main event. Honestly, I don't want to see Lethal win. He doesn't strike me as world champion material. He's a solid wrestler, but not every solid wrestler should get to be the champ. Wrestling is not the only factor, even in ROH. There are too many holes in Lethal's work (promo skills and playing a decent character being the obvious two umbrella reasons) for him to have an extended ROH title run.


That said I did write an article last month suggesting the exact opposite of this. My reasoning then was that Lethal could work as champion if the plan was for him to drop the title within a couple of months. I stand by that, and if he does win I’ll be hoping for a short reign.

I’m beginning to get the feeling that Steen won't be champion for much longer. I think this show, Supercard of Honor VII in April or Best in the World in June are going to see his reign end. I've not ruled out Lethal winning the strap on Saturday. Just because I don't want to see it happen doesn't mean it won't. I'm going to predict a Steen victory but add the caveat that I wouldn't be surprised to see him lose.

The 11th Anniversary Show looks a lot better on paper than last year's card. There are a greater number of appealing matches booked featuring a greater number of marketable talent. If you've got nothing to do on Saturday (more accurately around one in the morning, British time) there are worse ways to spend a tenner than an ROH iPPV. Bear that in mind.