It may not make as much money but the likelihood is that ROH's seventh Supercard of Honor will provide a more satisfying viewing experience for fans than WrestleMania will two days later. Ring of Honor's recent return to form has seen them produce two stellar iPPVs in Final Battle and the 11th Anniversary Show. Supercard of Honor looks like it will be a hat trick for the group.

I'm also looking forward to seeing how the SCUM storyline is progressed. The addition of more members seems unlikely, the group's already got a nice bulky roster, but we could see further hints of a split between Kevin Steen and the rest of the group. There are plenty of things that could be done with the faction and the unpredictability of it all makes for compulsive viewing.

Speaking of which, SCUM founding member and ROH world champion Kevin Steen will headline SOH VII against Jay Briscoe. Jay is a former eight time tag team champion and one of the most tenured men on the roster. While this is his first time headlining a pay-per-view in a singles match it's not his first shot at the ROH world title. Will he beat Steen? No. Briscoe is a respected and valued member of the roster but he's a tag team guy. There’s a very slim chance he could become the champ in years to come (ROH losing a swathe of key players to WWE could trigger that) but he's not the guy who will beat Steen.

I'm not the biggest fan of 'Dem Boys' but I think the style they work will match up well with 'Mr Wrestling'. It should be an enjoyable brawl. Going back to the SCUM plot I mentioned above I wouldn't be surprised to see Steen saving his opponent from a beating at the hands of his cohorts, most likely after the bout. Anything could happen though. Which is obviously a good thing. 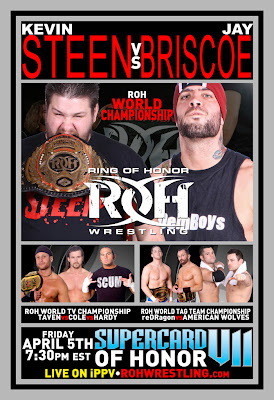 Title matches being presented as the biggest thing on a wrestling show? What a novel concept

One match SCUM will definitely be involved in is the ten man tag team match. ROH representatives Mike Mondo, Mark Briscoe, BJ Whitmer, Caprice Coleman and Cedric Alexander will face SCUM boys Jimmy Jacobs, Cliff Compton, Rhino, Rhett Titus and Jimmy Rave. With so many men involved it's unlikely to be an orderly affair. I imagine everyone will be given a spot or two but it's mainly going to exist to deteriorate into anarchy and keep the SCUM v ROH programme running. SCUM to win to ensure they're viewed as a threat for future shows.

Jay Lethal and Michael Elgin will wrestle one another to determine which of the two gets a future shot at the ROH championship. One of the many areas the company's improved recently is the schedule for title defences. We already know that Adam Cole and BJ Whitmer have title matches coming up. Adding Elgin or Lethal to the list will take us to three. I can't remember the last time the ROH champion had three challengers announced. It must have been years. It adds a “real sports” vibe to the promotion.

Elgin v Lethal could go either way. Lethal had a title match on last month's anniversary card which may make 'Unbreakable' slightly more likely to win here. Personally I'd like to see that happen, I think Elgin has been poorly handled over the last year and he needs a substantial storyline and series of matches to rebuild him. A credible outing against 'Mr Wrestling' would accomplish that. Their match at Glory By Honor XI was very good. A rematch at Best in the World wouldn’t be a bad thing.

ROH's second tier title will be on the line too. New champion Matt Taven will defend against Matt Hardy and Adam Cole in a three-way. This is a rarity in that it's a three-way feud that actually makes sense. Matt Hardy had a TV title match scheduled against Adam Cole but Cole lost the title to Matt Taven before he could wrestle Hardy.

I like Taven and Cole and enjoy Truth Martini at ringside. That should be enough to combat Matt Hardy being in the match too. I'm not a fan of him being anywhere near an ROH contract. I'd expect this match to go on somewhere in the middle of the show and be at least decent. A title change seems unlikely as Taven only won the belt a few weeks ago. I'm picking the House of Truth boy to win.

At the 11th Anniversary Show ROH brought in The Forever Hooligans for a match with The American Wolves. It was a return to an old booking approach: bringing in outsiders to pit against full time members of the roster. The same will be done at Border Wars with Naomichi Marafuji and Taiji Ishimori while Supercard of Honor VII will see an appearance from Karl Anderson.

'Machine Gun' Karl Anderson is the former tag team partner of Giant Bernard, better known as WWE's Tensai. Together they won the NOAH and IWGP tag team titles, setting the record for the longest reign (which still stands now) with the former. Don't judge him by the Tensai association, by all accounts he's pretty good and Tensai was presented far as more of a force in Japan than he is in WWE.

Anderson will face Roderick Strong.  It will be his first match for the company in over five years. If I thought he was going to become a regular I'd say he was going to win. That doesn't appear to be the case. This seems to be a one-off deal, so I expect 'The Messiah of the Backbreaker' to go over.

In what is likely to be the opening match ACH and Tadarius Thomas will wrestle QT Marshall and a mystery opponent. QT and his buddy will be managed by RD Evans unless Evans turns out to be the partner, which is unlikely but not impossible (Evans is a trained wrestler but only works as a manager for ROH). I think there's a chance ACH and Thomas could be managed by Prince Nana. He's still listed on ROH's roster page but hasn't appeared in a while. The storyline is that Evans stole all of Nana's money, which means that if Nana returns anytime soon it's likely to be as a babyface. That would be something new for the tried and tested Nana character. I think it could work.

I've no idea who QT's partner will be. Mike Bennett seems like a possibility. He's about the only noteworthy person not booked for the show with no clear way onto it.

An alternative is that Thomas will turn on the popular ACH and join Evans' stable. That could then set up the return of Tommaso Ciampa to turn babyface and team with ACH against the man that cost him the TV championship last year. What would be good about this scenario is that Nana could return alongside Ciampa and form a face incarnation of The Embassy, something we've not seen before.

There are a lot of maybes in there but none of it’s impossible. You heard it here first! I'm going to pick the heel team to win as ACH got a win on the last iPPV.

Former Wrestling's Greatest Tag Team partners and ROH tag team champions Shelton Benjamin and Charlie Haas will wrestle one another. This match came about because Haas turned on Benjamin. That's the storyline reason anyway. The backstage reason is that Benjamin is expected to leave ROH to return to a mid-card spot in WWE. With that in mind I think a win for 'The Outlaw' seems likely.

Speaking of former ROH tag team champions The American Wolves will try to become two time gold-holders when they challenge reDRagon. This match happened, without the belts involved, at Final Battle. It was one of the best matches on an excellent show. That bodes well for Supercard of Honor.

At Final Battle Richards and Edwards went over. That alone makes me thinks it's the turn of Fish and O'Reilly to win in New York. Also in reDRagon's favour is the fact that they've only had the belts a few weeks. It's far from impossible that they could lose the titles so quickly but it would seem a little strange. They appear to be due for a reign of at least a few months.

I wouldn't be surprised to see the champions pull out some shady tactics to retain their titles. That would set up future matches and add to the already rich story between O'Reilly, Edwards and Richards. It could be the Wolves' night though. Look how many predictions I got wrong for the last show.

Ring of Honor always tries to put on a good show over WrestleMania weekend. It’s a good move as it allows them to piggyback some success off of the marketing juggernaut that is WWE. The weekend has become a celebration of wrestling in general, not just WWE. It’s something for wrestling fandom as a whole, not just the viewers of one company. Expect an eventful card and a rambunctious crowd at the Hammerstein Ballroom.

As a complete show I'm looking forward to this more than WrestleMania XXIX.