Recent developments in TNA have made me wonder about the company's creative direction. There's clearly a long term plan in place. Several months' worth of storylines involving Bully Ray fooling everyone into thinking he's a reformed character while secretly being the President of Aces and Eights can attest to that. But are feuds pitting Ray against 'The Hulkster' and Sting really what TNA fans want to see? I know I'm not interested, and I find it difficult to believe I'm the only one. TNA's improved over the last two years but it's still a promotion awash with nonsense and performers who aren't pulling their weight.


Things aren’t beyond saving though. There are numerous things that could be done to make TNA a more enjoyable viewing experience. I've come up with a list of suggestions that I think could improve the TNA product. They’re listed below, and anyone at TNA who happens to be reading this is welcome to use them.

Go all the way with Christopher Daniels: 'The Ring General' has been one of the most entertaining things on Impact for almost a year now. What started as a seemingly throwaway pairing with Frankie Kazarian has had staying power and has shown that the twenty year veteran is still capable of reinventing himself and staying relevant. Effective heels tend to end up receiving cheers from crowds who appreciate how good they are at their job so it says something about how good Daniels is that he remains capable of getting the desired reaction.

Daniels could have made a very effective top heel. The focus on the Aces and Eights group, and his incompatibility with it, made that impossible. That shouldn't stop TNA continuing to give him things to do. Nor should it preclude him from consideration as a future world champion. 'The Fallen Angel' is one of TNA's greatest assets. He should be the star of the company's next long term booking cycle. 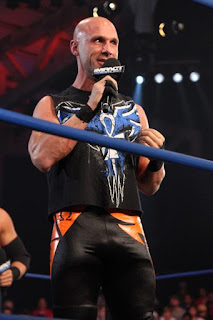 Make Magnus and Samoa Joe a tag team: They've already been reunited through the magic of battling Aces and Eights. Have them announce on Impact that they've decided to reform their tag team because they realise they can succeed together. If and when they do split, don't rush it. That's a scenario that could be used to bring Magnus into main events.

Make Robbie E and Jesse Godderz a tag team: It's been acknowledged that they have similar gimmicks. Why not embrace that and have them work as a unit? It's not like either man is anything special alone.

Should the writers be inclined they could even grant the combo an ECW-style entourage, perhaps installed to protect them from the monstrous Rob Terry (who can be downed with a… erm… framed picture). They'd already have Tara, a great character who I think excels when placed in a group setting. They could bring back Cookie. They could give them a bodyguard, maybe some plucked from the list of cuts suggested below.


Gunner could be put with them to run interference. Give him a bizarre costume (as was done with the Musketeer and Mitch in the Simon and Swinger group) and you could get some laughs (and some incredulous looks). Is getting laughs a bad thing? Not with these guys. Robbie E, Jesse and Tara are all well established as comedy performers in TNA.

Once they've feuded with Rob Terry they could move on to Eric Young. A programme between comedy performers would be a nice change of pace, and there'd be lots of matches to book if EY were still hooked up with ODB.

Finish the Aces and Eights angle: It's been running for a year now. It took months for the group's members to be revealed. The final line-up is uninspiring or detrimental to the product. It could have been used as a tool to make bigger stars of the likes of Garrett Bischoff and Wes Brisco. They've found themselves playing even less important roles than they were when they were Team Angle 2.0. Instead it’s just been an excuse to hire a truckload of former WWE guys.

It's a boring, uninspiring plot that's outstayed its welcome and has nothing left to offer. If the goal was to make Bully Ray the heel champion then the objective has been achieved. 'Calfzilla' is good enough to go it alone from here, perhaps retaining Devon for their history together and to play up the Team 3D reunion.

The writers need to come up with something new. Something that's not a knockoff of the nWo. We've seen plenty of those. Put wrestling at the centre of stories and make wins and losses matter instead.

Get rid of the TV title: Let it go with Devon or, if he sticks around, stop him wearing it. Seriously, it's worthless.

Make Taryn Terrell a wrestler: Having a gimmick referee for the Knockouts division seemed like a peculiar idea to begin with. I assumed it was going to lead somewhere. It hasn't. The most notable thing Taryn's been involved in has been an accusation of iffy officiating. Not exactly thrilling, is it?

Why not have Gail Kim reveal that she's lodged a complaint against Terrell that will prohibit her from officiating matches for the foreseeable future? That would excuse Taryn from ref duty and allow her to enter into a feud with Kim, using the excuse that she remains a TNA contracted performer and a trained wrestler. She's not on par with the rest of the Knockout crew but she might learn by association. Failing that she could always be put in a tag team. 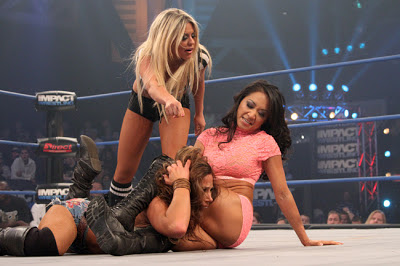 She learnt that move from Mae Young, you know

Improve the Knockouts division: Fairly broad point? Yeah, but I've got several suggestions that don't fall neatly under their own headers.

First of all, hire Ivalice Velez. She was far more impressive than Lei'D Tapa in their match on the February 28th Impact. The audience connected with her too. That's a very good indication that someone warrants a contract.

Lei'D Tapa, who was signed in Velez's place, could be built up as a monster heel. Treat her like a modern day Awesome Kong. Have her stand in the aisle to watch KO matches for several weeks before attacking someone like Mickie James or Velvet Sky to setup her first programme. Maybe even allow her to beat the champion for the title in her first official match as a Knockout. That could make her a star immediately.

Of course for that to work fans would have to care about the division and its performers. That's not a tough thing to achieve. Viewers want to care about the Knockouts, they're just not given much of a chance to do so. Give them all their own characters again, along with something to do. That could include bringing up some of the ladies assigned to OVW to help flesh out the ranks (so to speak) and reactivating the Knockout tag belts.

Release some wrestlers from their contracts: I know Matt Morgan only re-signed last summer but what's he done since returning? Nothing. He's been with the company since 2007, which is more than enough time to carve a niche for himself. That he hasn't means he probably never will. The story of Morgan becoming frustrated with his lack of opportunities before becoming serious and targeting the champ had been done to death too.

Joey Ryan has transformed into a spectacularly banal character since getting a regular gig with the league. He could be released and not be missed.

RVD is another guy that has nothing to do in the current TNA. He's a man trading on past glories. He's still fine in the ring and better on the mic than he was in his prime but he's faced everyone of worth and done everything of interest. Give someone else a chance to reinvigorate the X Division. 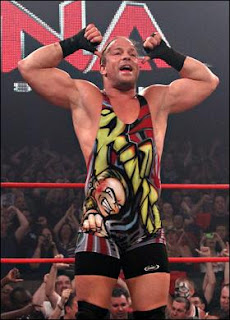 The entire A&E roster is ripe for a firing too. That includes Mr Anderson. TNA have floundered about with him for so long, switching him rapidly between heel and face, that he can't be cared about anymore. As I mentioned above, perhaps keep Devon around if there's a purpose behind it.

Finally, get rid of Hogan and Bischoff. The latter's not an on-screen performer but he's just as useless as 'Thunderlips'. Neither man has done anything to make TNA a more known brand or a more profitable company. There has been a distinct lack of fresh and entertaining programming too. The company has simply kept churning out the same WWE-inspired weirdness it has for years. If they knew how to improve things they'd have done it by now.

Make better use of Sting and Kurt Angle: By which I mean make both men part time. Use them as special attractions. Have Sting appear on Impact only to build up pay-per-view programmes. Have Angle replace Hulk as the General Manger and keep any wrestling matches he has either for PPV or for specially hyped episodes of Impact.

Restock the roster with young talent: Recruit fresh blood. The X Division in particular is bare. Why not make an offer to John Morrison. I'm sure one's been extended before but try again. He could attract fresh eyes to the X league. Longer term he could progress to wrestling for the world championship.

Kenny Omega and Sonjay Dutt should be natural choices to bring in. Both men would improve the booking options of the roster and make good challengers for Kenny King. How about the Young Bucks (or Generation Me as they were called in TNA) and BLKOUT? Those are four guys who could work in both the X Division and the tag division, another area of TNA programming that could do with some work.

Closing statement: The TNA roster is need of a shakeup. The product has been the same for so long that nothing feels fresh, no matter how it’s dressed up. The only way TNA is going to improve is with a refresh of the roster and a different tack being taken when it comes to concocting long term booking plans. Bully Ray having the title isn’t a problem, but pretty much everything else is.
Posted by Dave at 10:23