Rob Van Dam has been with TNA since 2010. Since debuting with the company he’s won the world heavyweight championship and the X Division championship, and worked numerous matches with “dream” opponents such as AJ Styles, Samoa Joe and Christopher Daniels. He’s done everything he can in the company. Except, to use the favoured term, take the company to the next level.


RVD was never going to be the man to do that. He was ECW’s most popular act in the late 90s and enjoyed a high profile spot on WWF television when he joined the company for the invasion angle in 2001. He never managed to elevate ECW as a promotion and he failed to become a major star in the WWF.


Why people thought he’d be able to perform the feat in the schizophrenic TNA I have no idea. The atmosphere in TNA and the approach taken to television is not geared towards allowing anyone, even someone with ‘Mr Monday Night’s’ prior status as a WWE star, to become a leading man. The spotlight has to remain firmly on Hulk Hogan.


Van Dam’s contract expired a week or two ago. I think it’s the ideal time for him to leave TNA and do something different. He could make more money in WWE. He could probably return to a pretty decent upper mid-card spot too. Since he last worked there guys like CM Punk, Sheamus and Daniel Bryan have risen to prominence. Van Dam could enjoy a pay-per-view programme with Bryan and Punk (less so ‘Great White’) and also help the progression of guys like Wade Barrett, Cody Rhodes and Damien Sandow.


WWE is not Van Dam’s only option. If he wanted to take a gamble he could join Ring of Honor. The ROH roster is packed with guys who would be able to keep up with RVD’s speedy ring style, not to mention help him wrestle in between his beloved high spots. Davey Richards, Eddie Edwards, Michael Elgin, Adam Cole, ACH, and Tommaso Ciampa would all be interesting, and fresh, opposition for RVD. They could even bring in Sabu for a couple of house shows for matches alongside Van Dam against the American Wolves, the Briscoes, and redDRagon. 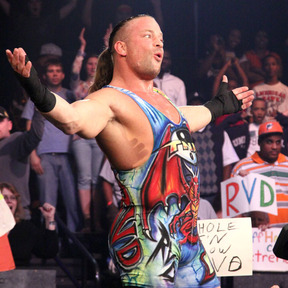 Looks like someone's about to get a hug
‘The Whole F’n Show’ would be an ideal man to create interest in an internet pay-per-view. There’s no reason he couldn’t debut as a challenger to Kevin Steen’s ROH championship at Best in the World. The promotion never used to shy away from giving outsiders title shots on larger shows. A good thing to note here is that ROH seems to be bringing in more outside talent for bigger shows. This approach helps to keep things fresh and interesting. Steen v Van Dam could be a classic.


The likelihood is that if RVD leaves TNA he will end up back in WWE. He’s in his forties and that’s where the money is. One of the main arguments for him going to ROH would be helping the group attract new viewers, which I’ve said above he is not well equipped to do. A surprise return to WWE to create an interesting mid-card wouldn’t be bad, but I’d love him to make a stop-off in Ring of Honor first.
Posted by Dave at 20:29