We're Living in a Society

We're all aware of social networking aren't we? The fad, and the term, have become incredibly popular over the last five years or so, thanks mainly to a surprisingly small number of websites. Facebook, Twitter, Tout and Instagram (there's an argument for bunging YouTube in there too) seem to be the biggies, with Twitter the biggest of the lot. Which is surprising when you consider that it's actually the most limiting of all the sites mentioned.


These things have become such an accepted part of day-to-day life that they're now routinely mentioned on wrestling shows. WWE is actually one of the chief investors in the Tout experiment. The poor judgment of that is a topic that will have to be discussed another time.


It's all pretty bizarre when you stop and think about it. Social networking, by its very nature, is not something that can exist peacefully alongside wrestling. At least not on the surface of it. It seems designed to expose secrets and inner feelings, things that the wrestling business has always needed to suppress in order to exist. Social networking defies kayfabe, the thing which wrestling at its heart still holds holy.


Don't fool yourselves into thinking that kayfabe no longer exists. It's changed in nature over the years but it's still around. WWE has been acknowledging its predetermined nature for around two decades. Over time most other companies have followed their lead. It's been an open secret that wrestling wasn't an actual contest for far longer. Kayfabe used to mean propagating the lie that everything that happens inside the ring is real. Nowadays it's more accurate to say that it exists to mask exactly how wrestlers do what they do without injury, and to keep future storylines under wraps.


Twenty years ago the social networking craze (fad, call it what you will) would have been disastrous for wrestling. It would have been too much too soon. As it is it came along at more or less the right time for wrestling. It's taken a while for those in the business to learn how to use it, and nobody has mastered using it to its fullest effect yet, but they're not far off.


At its most basic level the social networking medium is a great tool for wrestlers to interact with their fans. That's good news for all companies but it’s particularly handy for those that target younger markets, like WWE. For an eight year old who's massively into John Cena I can imagine there are few bigger thrills than the prospect of interacting with 'The Leader of the CeNation'. Twitter is ideal for WWE PR, fans, and wrestlers like Cena.


Of course Twitter also presents wrestlers with the ability to embarrass themselves, their peers and their companies. You don't need to go far to find examples of tweets that do wrestlers and their employers more harm than good. Ryback immediately leaps to mind there. He's tweeted some dodgy stuff in the past. When feuding with Cena earlier this year he mentioned Cena's ex-wife before deleting every tweet he'd ever made. A few months later he venomously lashed out at fans before pulling the full deletion trick again. 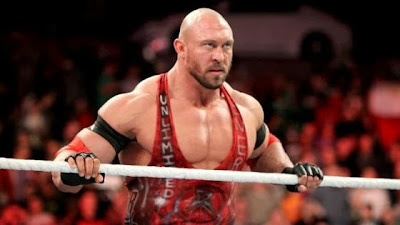 Lock up your wives
Outside of WWE it allows indy guys to make themselves known quantities. Colt Cabana is a talented guy but I can't imagine him being as big a name as he is without Facebook and Twitter and iTunes (we can count that as a form of social media too, I think) being so accessible. Using those tools he's built himself up into a guy known to wrestling fans whilst remaining unaffiliated with any major promotion. He had a long run in ROH and spent a while in WWE, both of which undoubtedly helped, but a lot of other guys have had that or more and then faded into obscurity. Cabana is a social media success story.


The important thing for the promotions themselves is making use of the medium for storyline purposes and doing so in moderation. A standard wrestling feud cannot really benefit much from Twitter. It will generally be two guys exchanging victories on TV and perhaps a pay-per-view with only the desire to win keeping them locked in battle. Wrestlers in such feuds can take shots at each other but ultimately they won't be able to add much to the rivalry because there won't be much to build on.


More advanced storylines can benefit greatly from embellishment using social media. The second Summer of Punk in 2011 was an early example of WWE experimenting in the field. A more recent example, and probably a more successful one as far as social media is concerned, has been the management versus Daniel Bryan story. It’s not featured social media in an overt manner, but it has seen a successful blurring of the lines between on-screen plot and reality. Or at least what wrestling fans perceive reality to be.


There’s tremendous potential for wrestling companies, particularly WWE with its immense resources. Once they’ve mastered how to integrate these opportunities with their TV product fully, and I don’t think they’re too far away from that, I think the nature of wrestling, its storylines, performers, and how we as fans interact with it all, will make a huge leap forward. Twitter scrolls at the bottom of screens are just the start.
Posted by Dave at 19:13