Hulk Hogan has left TNA. For the time being at least. It was to be expected.


Hogan had been linked to TNA for the last few years. In that time he has failed to implement any notable creative changes or help improve the average viewing figure. These were things that could have been reasonably expected from Hogan's presence given his standing in wrestling history. He's a man with a lot of experience and drawing power.


That TNA have allowed their deal to expire indicates that they no longer feel having 'The Hulkster' around is worth their while or that Hogan was unwilling to take a pay cut as everyone else in the promotion is being asked to when their contracts expire. Or perhaps both. I'm also of the opinion that it indicates Hogan may feel there are more lucrative opportunities waiting for him elsewhere. Specifically in WWE.


Hogan hasn't wrestled much for TNA, and hasn't wrestled for them at all since Bound For Glory 2011. But since that last bout he has mentioned (numerous times) that he feels he has a few more matches left in him. He also mentioned wanting to be the TNA world champion, but I think we can put that down to a misguided and-or half-hearted attempt to make the TNA prize seem more prestigious as much as any genuine desire on Hulk’s part.


If Hogan can wrestle a few more matches it would be easy to imagine him wanting them to take place in WWE. I mean, what wrestler would chose to wrestle their final matches in a struggling TNA if WWE seems like a possibility? And to Hogan WWE is always a possibility. No matter how many failings out he has with Vince McMahon or Triple H a Hogan return will always be possible because all involved stand to benefit. WWE gets increased television figures and pay-per-view buys while Hogan gets some cash in his bank accounts.


I don't think there's much argument to be made for Hogan not being a draw anymore. He will always be one of the biggest stars in wrestling (for better or for worse) and therefore will always be of interest to the casual audience. He’s had no effect in TNA because TNA have no idea how to promote and use him. That’s not a problem for the infinitely more savvy WWE. Nobody wants to see him wrestle on a regular basis but he'd be fine as a big match attraction on a big show with the right opponent. As is the case with many major acts Hogan is at his best when used sparingly.


It just so happens that WWE has a particularly big show rolling around next year. The company is expected to push the boat out for WrestleMania XXX because not only is it a 'Mania but it’s a round figured instalment. Such things matter in WWE. Over the last few years the company has become skilled at utilising guys working part time thanks to experience gained from working around the limited availability of The Rock, Brock Lesnar, and, to a lesser extent, The Undertaker. With matches involving The Rock or 'Stone Cold' Steve Austin looking increasingly unlikely for WM30 it's not hard to imagine WWE being interested in using Hogan on the show. 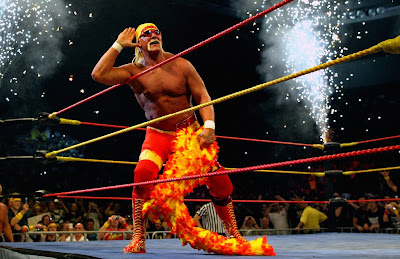 This guy says he's got one more leg drop left in him, brother!
The question of who the red and yellow icon could face isn't hard to answer, although the names that come to mind aren't necessarily desirable. As decrepit as he is Hogan has the name power to challenge Undertaker's Streak. 'The Phenom' would struggle to get the match of the night honour he's consistently earned every year for the last several years but if anyone in WWE could drag something approaching great from Hulk it would be him.


Brock Lesnar is another name that could be paired with Hogan. It would be a big marquee match (only slightly harmed by the fact it was given away on SmackDown in 2002) and while Lesnar's physical style would not be a natural fit with Hogan's current physical ability I'm sure they could come up with something worthwhile. Two key things to remember about this potential match are that Lesnar is a trained pro wrestler and does know how to work safely and that Hogan is a master when it comes to connecting with audiences. A softer approach from Lesnar in a match built around Hogan going all out for sympathy would stand a good chance of working despite the limitations it would entail.


Elsewhere there are guys like Punk and Bryan, who are not ideal choices but are good enough to be able to do something bearable with a limited big man. The biggest worry would be Hogan stealing the spotlight. That could harm either man's standing, although it would be an interesting test to see if Punk's as good and as popular as he believes himself to be.


The final obvious name is John Cena. Both men have been involved in successful inter-generational battles with 'The Great One' at WrestleMania. There's clearly interest in seeing first time matches pitting icons against one another. After Rock I think Hogan is the next best fit for Cena's style. The match would not be appalling, but it would get a tremendous buzz and would have the added bonus of being the only one I've suggested where WWE wouldn't need to consider turning someone heel1.


I'm sure that Hogan would prefer a light WWE schedule as opposed to a TNA return. He'd obviously get more money and would probably end up working less. He'd only be required on TV when a pay-per-view match needed hyping, which would realistically be twice a year at most. In TNA he'd be a TV regular pretty much all year round. Don't surprised if you hear Real American blasting out of speakers in the Mercedes-Benz Superdome next April.