Back in June ROH vacated their world championship due to the storyline injuries and real life contract negotiations of reigning champion Jay Briscoe. The tournament held to crown a new champion was a disappointment. Instead of using it as an opportunity to present itself as a company that scours the world for the best wrestlers and matches to give to its fans, and making its world title look genuinely desirable to the wrestling world into the bargain, ROH opted to enter most of its headliners into the brackets plus some mid-card guys everyone knew wouldn’t win. They then put out calls to some indy guys, with guys seemingly being chosen based on whether or not they were under contract elsewhere as opposed to whether they’d make the tournament special.


This approach resulted in predictable semi-finals and finals. I’ve written before that that didn’t have to be a bad thing. If match quality is high enough ROH can get away with being predictable a lot of the time. They market themselves as the sport of professional wrestling and as such match quality is of greater importance than in other North American promotions.


There was not a single unquestionable classic in the entire tournament. There were certainly some good matches but nothing that will be remembered fondly three years, or even one year, from now. There should have been. Wrestlers should have been encouraged to use their involvement in the tournament, one of the most high profile things ROH has done in years, as a way of moving themselves up in the estimations of fans.


Similarly ROH should have brought in big names to illustrate how special the tournament was. The likes of Jushin Liger, Doug Williams, Low Ki, Amazing Red, Jack Evans, Kushida, Keiji Mutoh, Hirooki Goto, Kazuchika Okada, Crimson, and Colt Cabana were and are all available for at least limited bookings. Not all would have provided wonderful matches but those that didn’t would have helped to present the ROH championship as something desirable to everyone working in wrestling. It could have been used as a way of presenting a stream of dream matches. Instead it became something that the company and its fans just needed to get through.


At least the right man won. Adam Cole being crowned the new world champion has set the promotion back on what looks like the right track. If they concentrate on promoting him as the lead villain of the company and keep lead challengers Michael Elgin and Jay Briscoe close on his tail the main event scene should be compelling until the end of the year. 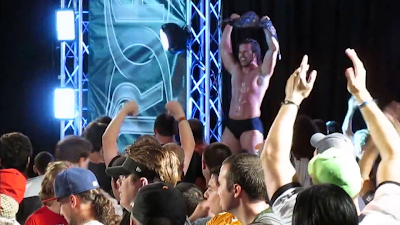 Adam Cole: the man with the ROH championship and the man to beat
I’d like to see singles matches between Cole and these two men over the next couple of months before wrapping the programme up in a three-way match at Final Battle. It feels like a nice scenario to take the company through to the end of the year before moving all involved in fresh directions.


I’ve been passionate about giving Michael Elgin the world championship over the last year and a half but I’m beginning to go off of the idea. He can no longer be presented as the hot young upstart that can carry the company. He’s had too many failed challenges for that. Maybe at some point in the future he could become champion but he’s been kept waiting too long now and as such he can’t have the impressive, career-defining run that was his for the taking six months ago.


Basically, ‘Unbreakable’ should have been the man to beat Kevin Steen. Preferably at Best in the World. It’s entirely possible he’ll defeat Adam Cole, but it won’t have the impact a title win would have done as recently as four months ago.


The honour (there’s a U in that one) of beating Steen to Jay Briscoe. It was presented almost as a reward for length of service by ROH and most fans seemed fine with that. I disliked the insinuation, feeling that world championships should be put on skilled or popular (or unpopular, in the case of bad guys) wrestlers rather than dished out to someone because they’ve been loyal over a long period. In fairness to ROH perhaps it was an attempt to keep ‘Dem Boys’ from moving to TNA or WWE. That wouldn’t excuse the decision but would make it a little easier to understand.


It seems unlikely that Jay will regain the title. Not only does ROH seem to shy away from multiple title reigns with their top prize (note that that only one man has won the title twice in its eleven year history) but he is still primarily a tag team wrestler. He can be presented as a credible contender now that he’s a former champion, which is perhaps another aspect of why he had it in the first place, but he doesn’t strike me as a future two time champion. There’s nothing for him to do in the role and he’s proven too controversial for a modern mainstream company.


I suspect Cole will make it to 2014 with the championship and I think it’s likely that he’ll lose it to someone he’s not currently involved with. Jay Lethal, as ever, could stand a chance of being that guy. If ROH want a short term face champion to ferry the belt between more substantial heel acts I could see him getting the nod for a caretaker reign.


A man who warrants a mention based more on his own merit is Tommaso Ciampa. ‘The Sicilian Psychopath’ has been presented as a strong contender since returning from an injury a few months ago. He lost to Cole in the tournament semi-finals and doesn’t strike me as someone who could realistically win the title now. But given a year or more to establish himself as a champion-in-waiting by beating bigger names and, more importantly, wrestling a string of excellent matches, I think Ciampa would be accepted as the man to dethrone Cole.


ACH could be considered for a title reign if Cole holds the gold long enough. He’s certainly popular enough. He’s wrestled a string of dazzling matches this year and would bring a style to the top of the ROH card that we haven’t seen in years. He’d be a very different sort of Ring of Honor world champion.


I admit this is incredibly unlikely though. As good as ACH is I think a world title is years away, if it’s in his future at all. Even ROH, the company that likes to present itself as the company that promotes guys based on ability, would struggle to justify booking a man of ACH’s stature and wrestling his style as their top guy. I’d love to see it and don’t think it’s impossible. It’s just massively unlikely, especially right now.


The guy I currently think stands the best chance of beating Adam Cole for the title is Kevin Steen. Although he’s not quite as popular as he was last year he is still the man who gets the biggest reactions on ROH shows. Earlier in the year I was assuming that Steen would lose the belt to Matt Hardy and regain it at or by Final Battle, so admittedly I find it easier to accept the idea of a second Steen title reign than I do one for a Strong, a Richards, an Edwards or a Briscoe.


Of all the former champions on the roster ‘Mr Wrestling’ strikes me as the best choice to regain the title. His first run seemed as though it was cut short. There were things left for him to do and people left for him to face. The timing would work well here too. Steen could swoop in for a run at the title once the New Year begins. Steen v Cole is headlining the November 2nd show in Cincinnati. Perhaps something will happen there to set up a feud or a rematch later.


Right now Steen is my choice to defeat Cole, sometime in the first half of next year most likely. I’d like to see Cole have a long title reign, until this time next year or longer. That seems unlikely though, based on ROH booking over the last few years. Cole could make such a reign work I’m sure. And he’d deserve that time in the spotlight for being one of the company’s most consistent and hard-working wrestlers.
Posted by Dave at 07:18