Ascension (to the Top?)

Stop and think about The Ascension for a moment. If you're not familiar with them take this opportunity to look them up. Pay particular attention to the results of an image search.


Looking at or thinking about The Ascension for more than a couple of seconds should make one thing clear. They are ridiculous.


The inspiration for the gimmick seems to be Game of Thrones, with some Undertaker, Kevin Thorn and ancient Egyptian symbols thrown in for good measure. These sorts of characters crop up in WWE every few years but with the exception of 'The Phenom' they never have much staying power without hefty modifications being made to the gimmick. The ideas never gel with the rest of WWE. 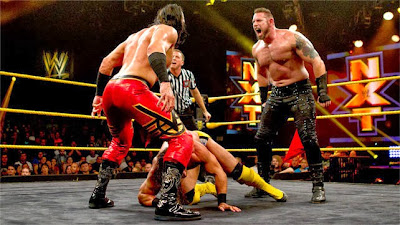 This sums up the nonsense that is The Ascension nicely
These days The Ascension feel out of place simply because practically every performer in the company sticks to the forename-surname format and is presented, broadly speaking, as a normal guy. Conor O’Brian and Rick Victor sound the part but they don’t look it. The outlandish Ascension characters wouldn't have slotted neatly alongside the characters of the nineties either. Gimmicks were more prominent then certainly, but they were generally walks of life turned into wrestling characters. The Ascension would have been just as incongruent then as they are now, just for different reasons.


But this is part of their charm. That Conor O'Brian clearly isn't in the shape he should be in, that Rick Victor clearly has no personality, that they’re not as polished as they should be for the level of prominence they’ve gained in developmental all adds to the utter ridiculousness of it all. We can't take them seriously to begin with. The best thing they could do is ham it up as much as possible. Which they have been doing and continue to do.


Sooner or later I expect we’ll see O’Brian and Victor on the main roster. Tag teams seem to be in the in-thing right now. You can level many criticisms at The Ascension but not looking like a unit is not among them. If tag team wrestling is going to be a regular part of the WWE experience they’re going to need pairs of guys who stand little chance of cracking the big time on their own merits. The Ascension fit that description perfectly.
Posted by Dave at 22:00