Somebody in TNA has finally taken notice of the fans. Free of the constraints of Hulk Hogan's contract AJ Styles is at last getting the opportunity he deserves to headline a pay-per-view for the world title, and to step up and be ‘The Man’. It’s what they’ve needed to do all along!


I'm being facetious of course. Styles has had chances to be the megastar TNA has always needed many times before. This latest shove, modelled on WWE's use of CM Punk in 2011, is simply the latest in a long line of attempts to turn Styles into something special. It won't work. I know this because it's never worked before and AJ has not changed significantly since the last time. If he had it in him to be that guy he'd have done it by now.


Yet a Styles push is something fans constantly call for. Make Impact the AJ Styles show, give him the championship and let him show his wrestling ability and the ratings will pour in, or so the logic goes. I won't argue that having Styles in a more prominent spot than he's typically been in for the last two years, and wrestling lengthy matches, would be the best use of him but it's not enough to save TNA. Styles has been used as well as a company like TNA can use him at various times in the past. It didn't make TNA into a global juggernaut or worthwhile number two wrestling promotion then. It won't do so now.


Pitting Styles against lead bad guy Bully Ray should result in a very good match. Styles' strength, as noted, is wrestling longer than average and exciting matches. Ray has been enjoying one of the best periods of his career over the last few months, easily the greatest portion of his career as far as his singles endeavours go. I don't doubt they'll produce a worthwhile match, but it won't be the sort of thing that encourages fresh eyes to TNA. Ultimately that's what TNA should be striving for with every show they put on, especially PPVs.


I can see one of two things happening with this match. Either Bischoff and co will continue to ape the Summer of Punk II plot and have AJ win the title while supposedly working without a contract or Dixie will further cement her ill-advised heel turn by costing the fans' golden boy a victory. The second option is almost as unappealing as the first but that it wouldn't be such a blatant rip off of a relatively recent opposition plot, and that it wouldn't result in 'The Phenomenal One' getting his umpteenth, inevitably doomed chance to prove he's 'The Man', makes me think it would be preferable.


I hope Bully Ray wins because he, in a roundabout and stunted way, stands for a fresher approach than AJ Styles does1. Bully is also a more rounded performer than Styles thanks to his strength with promos, which makes me think he deserves the championship and the top spot that comes with it more. 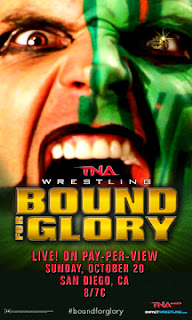 Why has this been allowed to happen?

The problem of how TNA stars are perceived is not one exclusively linked to AJ Styles. Nobody in the company is seen as a genuinely big star. Even people who have been big names elsewhere, such as Hulk Hogan, Ric Flair, and Jeff Hardy, lose lustre and credibility in TNA. There are dozens of reasons for this, a relatively minor one being how TNA handles its world title. Specifically I'm talking about former world champions going back to hold mid-card singles titles. The tag team championships are different because they can contribute to storylines in interesting ways and, more importantly, don't feel like a step backwards. The logic should be that once a wrestler has won the world title no other singles championship can satisfy them2. At the moment it feels like TNA is in danger of making their world title look like a secondary title.


I bring this up because four of the five men in the Ultimate X match are former world champions. How is a world title meant to look important when pretty much everyone on the roster gets a turn to hold it? As with the main event I'm sure the match will be good, although there's a chance this one could get a little too spot heavy. A gimmick match becoming too reliant on big spots? Well, yes. If incredible, death-defying leaps are being rolled out at the three minute mark how is an audience meant to care (and react) when spots just as ludicrous are appearing twelve minutes into the match? Pacing is the key, and some of the guys in this match have had trouble in that area in the past.


The participants, for the record, are Jeff Hardy, Samoa Joe, Austin Aries, Chris Sabin, and Kenny King, with the latter being the one never to have held a world title. Reasons could be found for all of them to win. Hardy would be winning a title he's never held before3. 'A Double' and Joe would be getting something to do. Kenny King would be solidifying himself as a mid-card stalwart (which is even more meaningless in TNA than it is in WWE). Sabin would be getting something to brag and boast about, enhancing his wearisome heel act.


I'd like to see King win. I don't think it's going to happen. I suspect Sabin will leave with the gold.


In order to combat the slenderness of their roster TNA have granted considerable time to two of their middle card matches: Sting v Magnus and Kurt Angle v Bobby Roode. It was the smart thing to do. In theory it should create interesting matches with understandable reasons to be taking place. That’s what a show like this needs.


In practice it’s not worked out quite as well as could have been hoped. Acting is not the strength of either Magnus or Sting, which is unfortunate as they’re teammates breaking up which has meant their reasons for clashing have been entirely verbal (as opposed to the more conventional random run-ins and beatdowns). Their exchanges have been awkward and have frequently made me cringe.


That said it’s nice that TNA appears to be planning on doing something worthwhile with ‘The Mag Daddy’. He’s got the look, size and promo ability that are rare in wrestling these days, and he’s also one of the few people that has managed to continually shrug of any nonsense thrown his way by the writing team. Used right he could be someone that helps TNA grow. A split from and feud with the Main Event Mafia would be a good starting point, and it looks like that may be what we’re getting.


I’d like to say TNA will do the smart thing and put Magnus over clean. I can’t see that happening. I think he’ll win via underhanded tactics to further demonstrate that he’s making a turn. I wouldn’t be surprised if Sting simply won clean. That would sum up the company’s approach to preparing fresh storylines and building new stars perfectly.


Angle versus Roode hasn’t been mishandled. Announcing Angle’s return for the biggest show of the year makes sense: it helps it to feel like a worthwhile event and may possibly encourage a few more people to tune in. The trouble with it lies in the fact that we’ve seen the two men clash many times over the last several years. It was at BFG two years ago that Roode’s headline elevation started with an unsuccessful challenge against Angle. They won’t have a bad match, but it will be very hard for them to have a fresh one.


As far as a winner goes it would make sense for it to be Angle. A loss wouldn’t harm Roode while a win for Angle would reintroduce him in the right way and provide the crowd with something to cheer for. I think it helps if big shows (and Bound For Glory is the biggest in TNA Land, remember) can provide more face wins than heel wins whenever possible.


Elsewhere on the card ODB defends the once prestigious but now mostly forgotten Knockouts championship in a three-way match against Brooke (Tessmacher, not Hogan) and Gail Kim. Again I find myself thinking that the match should be fine but I’ll be surprised if it amounts to much more. I will say that it’s a shame Taryn Terrell’s not involved in the product at the moment (she’s pregnant) because she was looking very promising as a wrestler.


The final match will see tag champs Gunner and James Storm defend against the winners of a gauntlet match. Involved in that are Eric Young and Joseph Park, Chavo Guerrero and Hernandez, Bad Influence, and The BroMans. Of those four Bad Influence are my preferred unit but we’ve seen a lot of them over the last year. Robbie E and Jesse Godderz are a promising tandem that TNA management were smart to pair up. They deserve to make it to the pay-per-view and wrestle for the titles. Whoever goes through I’m not going to predict a title change, but anything could happen in a company as haphazard and desperate as TNA.


The last thing to mention is potential returns and debuts. Mr Anderson, Mickie James and Hulk Hogan have all left TNA recently. In each case it’s been due to contract negotiations. In theory any or all of them could show up at Bound For Glory. In practice Hogan and James are unlikely to appear.


Anderson strikes me as someone who will return to TNA. It’s hard for me to imagine him trailing around the US indy scene and WWE appear to have no interest in him. In TNA he’d be guaranteed an upper mid-card spot at least, plus a regular paycheque. He was written off TV as part of a rivalry with Bully Ray, which would make his reappearance during the main event natural.


The last man to mention is potential debutant Ethan Carter III. Formerly NXT’s Derrick Bateman the real life Michael Hutter has signed with TNA as part of rumoured influx of new talent. The character has apparently been inspired by a football player called Robert Griffin III. He goes by RG3 and Ethan will go by EC3. It doesn’t sound the most thrilling of ideas, but introducing the character at a pay-per-view would provide it as good a start as possible.


Bound For Glory's problem is that it just doesn't feel like a must-see event. It's a card filled with the same faces we've been seeing for years. There are no matches that have the aura that they can't be missed. It's allegedly the company's biggest and best show of the year but it has unfortunately rolled around at a time when TNA are simply incapable of living up to the hype that entails.


1 Which is a fairly depressing thought.


2 I've written this before but it bears repeating every once in a while.


3 This seems to be becoming increasingly important in wrestling. It's an excuse to put guys into feuds. It's linked to the former world champs winning mid-card titles problem, the "I've never won that belt before" shtick being the excuse to get the wrestler in question competing for a title clearly below their station.
Posted by Dave at 09:52