Battleground feels like it will be another filler pay-per-view, one that exists to keep storylines ticking over between bigger shows without having much worth in its own right. Even if this is true it's not a guarantee that the show won't be worth paying attention to. The card looks noticeably more appealing than Night of Champions did three weeks ago. It's almost certainly going to lack the impact of 2013 stablemates like SummerSlam and Royal Rumble but not everything can hit those heady heights. If expectations are kept in check it looks like it will be enjoyable enough.


The main event match is Daniel Bryan v Randy Orton for the vacant WWE championship. Technically this will be the third PPV in a row where they've faced each other but the first, at SummerSlam, was more angle than match. However you look at it we're well into Bryan versus Orton as a feud. The matches and the majority of their interactions have been very good. Crowds have bought into 'The Viper's' heel turn and continued to back 'The Dazzler'. Which is exactly what WWE wanted.


There's been a definite pattern to the programme so far. While Bryan's championship victory at Night of Champions disrupted the standard formula and came as a surprise the weekly stuff has been more predictable. Bryan has found himself beaten down by 'The Apex Predator' and-or The Shield and-or Big Show but refused to give in. It's a fine, effective approach but I can't help but think WWE are going to need to do something new with all parties after Battleground. The method will have run its course.


This probably won't be an issue. While Bryan and Orton could easily do another pay-per-view match or two before people are sick of them together I suspect they'll be going their separate ways after Battleground. The Big Show swerve turn I predicted for NOC (you know, the one that never happened) could just as easily happen at Battleground.


'The World's Largest Athlete' could cost Bryan the title and then wrestle him at Hell in a Cell and Survivor Series before Bryan gravitates back towards the title. That was the approach WWE took with Punk in 2011: he lost the gold and then had some matches against and alongside Triple H (he never faced Kevin Nash, sadly) before regaining the belt three months later.


Should Show’s turn happen Orton would be left free for a feud with... ummmm... pass. There's no obvious challenger for 'The Apex Predator' but I'm sure WWE could cobble something together. Perhaps Cody Rhodes could get the nod. He's likely to "have a job again" by the time we reach HIAC.


I'm going to predict a Daniel Bryan loss. Orton winning and continuing to work as a placeholder for Bryan, Cena or Punk makes far more sense than putting the title on Bryan again. Another short reign would harm his credibility and turn people off of him. At this point he’s more effective as an underdog chasing the gold.


A strange tie-in to Bryan v Orton is the Divas championship match between AJ Lee and Brie Bella. Newly single Randy Orton took a leaf out of Ric Flair's play book on RAW and hit on (a term I despise that feels apt here) Brie. She is, of course, the fiancé of Bryan and so turned Orty down. The show ended with Bryan being duffed up by Orton and Brie running out to help, only to stop when she remembered how ineffective her efforts would be.


Linking the Bellas (more Brie than Nikki) to Bryan on Total Divas is one thing. It's a largely scripted reality show but it's still based on what's real, and what's real is that Bryan and Brie are in a relationship. WWE had little choice but to acknowledge that there. Linking them on RAW is quite another thing. The shows are effectively two separate worlds and the company could quite easily have downplayed or ignored aspects of Total Divas, the Bryan-Brie relationship among them. By linking them in such a meaningful way on RAW WWE have made it clear that Brie is to be considered a face.


What this means for her title prospects (and her sister) is anyone's guess. WWE may be determined to present Brie as a good gal, and some fans may go with it, but the majority are still going to cheer for AJ Lee. She's the one we want at the top of the division. She's earned it. Brie is never going to be seen in the same light because she does not come across as someone with as much passion for wrestling as AJ.


My prediction is that the ladies will get their usual crowd reactions at Battleground and that Brie will go down in defeat. There's a chance she'll win to set up the predictable "your girlfriend won but you didn't" routine but I'd like to think WWE has more faith in and respect for AJ and what she's trying to do with and for the division than to shortchange her like that.


Also towards the top of the card is the Goldust and Cody Rhodes v Shield match. The tag team titles aren't being defended, instead this match has been given some stips depending on who wins. If Rollins and Reigns are victorious the Rhodes boys will be banished from WWE "forever" and Dusty Rhodes will lose his job as an NXT trainer (he's already been placed on sabbatical as the general manager, replaced by Stetson-wearing, hot stepping Texan John Bradshaw Layfield). If the brothers are the winners then they'll get jobs with WWE.


Given that WWE has been pretty good at honouring stipulations recently and that Cody has at no point stopped being employed I find it hard to imagine the Rhodes brothers losing here. There's also the fact that Goldust has only been offered a job, the inference being it will be something we don't expect. Also, a Shield loss would probably setup a rematch for the belts, which is something I can imagine filling time on the post-Battleground RAW. The story of the Rhodes versus the McMahons could continue whoever wins but the good guys going over makes far more sense as it would set up so much.


The World Heavyweight championship will also be defended in a rematch from Night of Champions. On that show challenger Van Dam won by disqualification after uber-macho Alberto Del Rio refused to release his cross arm breaker submission hold because he's just so manly. The DQ finish was WWE's way of not burying RVD in front of his home state fans as well as setting up a rematch.


Frankly either man could win. ADR has either been the WHC or the lead challenger since the start of the year. I wouldn't be surprised to see him distanced from the title soon. Nor would I be surprised if Van Dam were given a run as champ to make the most of his popularity. I don't feel strongly enough about the situation to argue that a title change will definitely happen but I also can't deny the time doesn't feel right. This being a hardcore match also favours ‘Mr Pay-Per-View’.


Another screwy finish with 'The Essence of Excellence' leaving as champ would set up a Hell in a Cell collision though, so bear that in mind. I'm going with a Van Dam victory. It's nice to have a world championship match that's tough to predict. Hopefully they'll give us something worthwhile to watch.


Intercontinental champion Curtis Axel will go from wrestling the second most important match on the last pay-per-view (admittedly as a passenger) to the least important on this one. He'll defend his prize against R-Truth. The best we can hope for is something inoffensive that's used to lead into Ryback v Punk. Axel to retain. What's up, Truth? Your eyes as they stare at the lights.


On the subject of filler there’s been talk of Bray Wyatt v Kofi Kingston happening. If it’s going to happen I expect it to be confirmed after this week’s SmackDown. If it goes ahead I think we’ll see Wyatt win. Kofi’s role is to make guys like the Wyatt Family look good.


Four months ago Dolph Ziggler was one of the two hottest guys in the company. Since then he's lost the WHC and slipped down into a spot lower than the one he was in at the start of the year. Three months ago Damien Sandow won a Money in the Bank briefcase. Since then he's made one further supershow appearance losing to Cody Rhodes. These spirals of disappointment will entwine at Battleground when the two men wrestle one another in the pre-show match.


There's nothing wrong with being on the pre-show. It's better than not appearing at all and WWE seem to have picked up on the fact that it's an advert for their pay-per-views so it's probably best to include a good match. As such being placed on the pre-show can be taken as a vote of confidence. That said there's still a stigma attached to the position. It stems from the days of guys not over enough to be used on the main show being tossed out there to warm up the crowd.


I'm sure 'The Intellectual Saviour' and 'The Show Off' will put on a cracking match. Hopefully they'll get to do so, in a rematch or with others, on the Hell in a Cell show later this month. Either could win but I'll pick Ziggler. A face win would set a good tone for the evening. 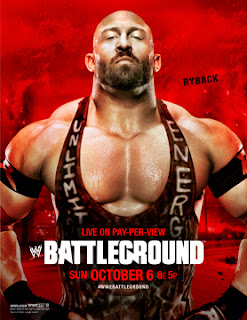 Paul Heyman gets his guys on posters
Finally we have CM Punk versus The Ryback. It was around this time last year when they began their first feud. The roles were reversed then, as was Paul Heyman’s allegiance, and 'The Human Wrecking Ball' seemed like he could become the next big star. Had WWE treated him better he could still have been on course for that now. Instead he's been misused throughout 2013 and is just another guy on the roster.


Punk has been pinned on the last two pay-per-views and WWE has made it incredibly clear that protecting 'The Big Guy' is not a priority for them anymore. And  ‘The Second City Saint’ has lost or failed to win in his last three supershow outings. So on the surface a CM Punk victory seems inevitable. But it may not be.


Wins and losses don't mean a great deal in WWE once someone has reached a certain point. Punk has reached that level and doesn't come across as someone who has a problem with losing on pay-per-views (a medical condition known as Michaelsaphobia). It's easy enough to imagine Heyman interfering on his client's behalf to cost Punk a win. There's been no indication that their feud is going to end soon and a Punk loss is a solid way of maintaining the status quo.


I've not been the biggest fan of their rivalry, which started in July and has felt like it’s dragging for much of its time, but the fact that Heyman has various clients for Punk to battle has at least kept matches fresh. I wouldn't be surprised to see another handicap match inside a HIAC, this time putting Ryback and Heyman against Punk, followed by some sort of team outing at Survivor Series. The latter match could be a nice way of showing us the next Paul Heyman guy: they could defect from Team Punk mid-match.


The long and the short of this is that I think Ryback will defeat Punk. As with ADR v RVD this one could go to either guy but I like The Ryback's chances slightly more.