Battleground will not be remembered as one of WWE’s better pay-per-view efforts. When it was good it was really good, but unfortunately that wasn’t often enough. There were too many filler matches for this to be noteworthy.


Part of the problem there is that too many matches are left until the last minute to be put together. If Bray Wyatt and Kofi Kingston’s problems had started the night after the last pay-per-view (held only three weeks earlier) there would have been more reason for the crowd to be emotionally invested and, just as importantly, there would have been another match that could have convinced people to buy the show. With a three hour RAW, a two hour SmackDown and numerous superfluous programmes each there’s no excuse for WWE not to be creating more mid-card conflicts.


“Never before has WWE been so divided,” lied Josh Mathews as the pre-show kicked off. That set the tone comfortably low for the evening. The experts chosen to join him were The Miz, Tensai and Titus O’Neil. ‘The Big Deal’ didn’t shine as he has done on commentary before, but he still came across better than his fellow panellists.


The pre-show match saw Damien Sandow take on Dolph Ziggler. ‘The Intellectual Saviour’ prefaced his loss with a promo that referenced Benjamin Franklin. That served as a nice reminder that Sandow’s character hasn’t been drastically altered since being introduced last year. That’s a rarity in WWE these days and speaks to the good work he’s done with the character.


The show proper started with the World Heavyweight championship hardcore match. Champion Alberto Del Rio defended against challenger Rob Van Dam. It was an improvement on their match at Night of Champions. The relaxed rules and receptive crowd benefited both greatly. RVD shines when he can through pieces of metal at people’s heads.


For an opener the match was fine although it was a little deliberate in places, most notably when Van Dam was pratting about setting up the ad hoc weapons for his Innovative Offence™. The list of weaponry included a chair, a ladder, and a rubbish bin (or trash can if you're in North America). Ricardo also involved himself, smacking his former employer with the bucket he carries about. He got a pasting in return. 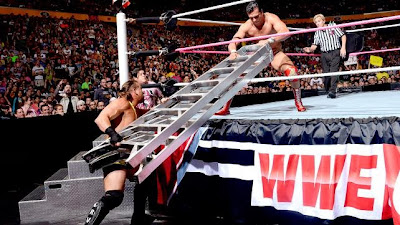 Ladder (tug of) war!
Van Dam’s undoing proved to be the Van Terminator. Once he’d missed that ADR quickly applied the cross arm breaker, with a chair added for additional pressure. ‘Mr Pay-Per-View’ had no choice but to submit.


Backstage Zeb Colter cut a promo about Buffalo being a haven for illegal Canadian immigrants. Cesaro and Swagger stood behind him mocking the audience. Naturally 'The Swiss Superman' showed more personality here than Swaggalag. His ability to make something as banal as standing around while someone else cuts a promo entertaining is one of the reasons he’ll go far in WWE. He’s just too good not to be given things to do.


The Real Americans beat The Great Khali and Santino in a forgettable tag match. Cesaro got the win after a lengthy big swing on Khali. Yes, the big swing is now a convincing finish in WWE. Add that to the list of reasons to like Antonio Cesaro.


Another nothing match followed: Intercontinental champion Curtis Axel defeating against R-Truth. In fairness Axel did what he could to perpetuate the image that his title means something. It’s not his fault that it’s been devalued over the course of a decade by indifference from the writing team. Cole told us that “many people say Axel is the perfect Paul Heyman guy.” What he didn’t say is who these people are or why they’re saying such stupid things.


Match four (or five if you’re a pre-show counter1) saw Brie Bella strut out to the ring to challenge for the Divas championship. The champ skipped out with the modern-day-female-Diesel, Tamina Snuka. She more than counteracted Brie’s second, Nikki.


I like the pairing of AJ and Tamina. Her previous affiliation with Big E Langston showed that AJ was the sort of character who worked well having a heavy at ringside. Tamina makes more sense in the role because she can actively involve herself in AJ’s matches, where Big E couldn’t. It also gives her something to do. She’s not a bad wrestler but without this new link she wasn’t going to get anywhere while the AJ versus Total Divas plot was going on.


Michael Cole chose the opening moments of this match to reveal the results of the greatest power couple poll that had been running on the WWE website (or on their app or… somewhere). The winners were Edge and Lita. Personally I can’t see how anyone could justify voting for any couple other than Triple H and Stephanie McMahon. They’re a combo so powerful they’ve had storylines dedicated to their heelish management styles twice and who genuinely run the company.


AJ won a short, basic match after Brie was distracted by Tamina throttling Nikki. It was not of the calibre we've become accustomed to from Ms Lee. That was more of a time issue than anything else. Simply put, they didn’t get enough.


Backstage Dusty Rhodes told Renee Young that no matter the outcome of their match the Rhodes family would leave Buffalo with their heads held high. Goldust, whose facepaint seemed to be patterned after Darth Maul, said he and Cody would expose The Shield as puppets of the regime (someone should have told him that was never a secret). Cody put over his dad’s charisma and his brother’s natural ring ability before said they were fighting for their lives and their family. It was good stuff.


Business picked up with the tag match that followed. All four men did their absolute best to make the match a good one and the crowd came to life. They built to a great conclusion: Dusty dropped Ambrose with a Bionic Elbow and was about to get attacked by Reigns (presumably he would have been treated to a spear) but Goldust made the save. Back in the ring Rollins tried to sneak in a win with rollup but Cody escaped and hit Cross Rhodes for the three count. 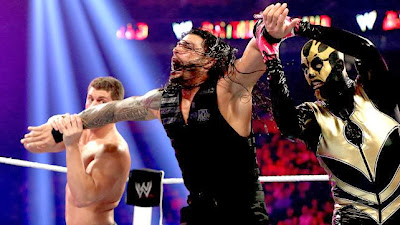 This picture was included solely because of Goldust's cartoonish facial expression
The low card gang (and Dolph Ziggler) came out to congratulate the winners in the aisle. Nothing says a big match has just been won by the appearance of Zack Ryder, the Usos and Justin Gabriel. Up in the expert skybox Miz said he wanted to be the first to welcomes the Rhodes boys back to WWE. Presumably he’d missed everyone else just doing that exact thing.


Brad Maddox was shown on the phone to Triple H and-or Stephanie McMahon. The point of this was to let us know that they’d left the arena. Apparently they'd been called to an emergency meeting. After nine. On a Sunday. During a live PPV. If this doesn’t sound feasible then you’re probably new to wrestling storylines.


Beat Wyatt beat Kofi Kingston in match number six (or, indeed, seven). The highlight of the match was Bray walking upside down on his hands and feet. That’s something I imagine we’ll be seeing ‘The Eater of Worlds’ do again. I like it. It made it clear that he’s a peculiar guy (not that that point wasn’t already clear). He won after reversing the SOS into Sister Abigail.


After the match Rowan and Harper hit a back breaker and a big boot on Kingston. Bray then told everyone to follow the buzzards.


CM Punk and Ryback took the semi-final spot and had a decent match. There was nothing especially memorable about what they gave us. It was the standard Ryback-slash-Punk-slash-WWE main event format. The babyface got beaten down for a bit before making some comebacks, with some ringside brawling featured for good measure. ‘The Second City Saint’ won with a low blow, which he managed to sneak in as the referee was telling Paul Heyman to give up a kendo stick he’d yanked from beneath the ring.


The final visit to the expert panel revealed that they were all backing Bryan. I’ve written before that Bryan getting as much support as he does in such situations doesn’t do the underdog image he trades on any favours. That’s as true now as it’s ever been.


The production truck suffered from technical difficulties during the video package hyping the main event (known as “pulling an ROH” in wrestling circles). This resulted in several seconds of Justin Roberts standing around looking gormless followed by an apology from Michael Cole. Hey, at least the problem didn't effect a match.


The match was slow to get going which left the commentary team to provide some highlights. They did so. ‘King’ said Bryan's living his dream, referring to the Brie proposal and winning then losing the WWE title. The Brie bit I understand but how is being stripped of a title living a dream? Later on he would bring up Bryan having worked in Memphis (around a decade ago) as further proof Bryan was living his dream.


Michael Cole made reference to Bryan’s old 'American Dragon' moniker and the eye patch era (which came about thanks to an errant blow from Takeshi Morishima). It was surreal hearing these things referenced on a WWE event. They famously don’t like to acknowledge things they’ve not created themselves.


Eventually Bryan and Orton’s pace picked up. When that happened the audience became louder, clearly in support of Bryan. ‘The Viper’ tends to wrestle slower matches, which surprises me when you consider that he’s probably one of the best conditioned men on the roster. 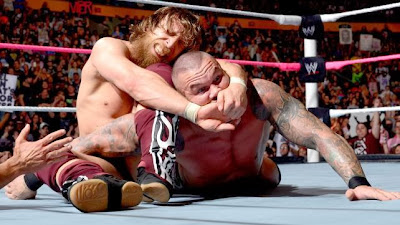 Thing from The Addams Family was the guest referee
The finish is what this match will be remembered for. Bryan had Orton in the Yes Lock and Big Show's music started playing. 'The Giant' thundered down to the ring and pulled the ref to the outside before KOing a perplexed Bryan. Brad Maddox then appeared and dispatched the mysteriously rehired Scott Armstrong to the ring. At this point it seemed as though the Show heel turn I'd predicted was on.


This turned out to be a fine swerve. ‘The World’s Largest Athlete’ pulled Armstrong from the ring before he could count the match in ‘The Apex Predator’s’ favour. He got blasted with the WMD too. Show finished by lumbering into the ring and hitting Orty with perhaps the weakest KO punch he's ever performed. Maddox looked stunned as Big Show hollered and then stared at him.


A WWE PPV ending on a non-finish? It was common in the Attitude Era. It's rare now. Here it worked as it was clearly setting up a return match for the Hell in a Cell pay-per-view. It also featured Show finally standing up to the McMahon fam, which is what made the live audience accept it. Had things ended with Show officially turning heel and the match going to a non-finish things would have been different2.


As WWE pay-per-views go this was slightly below average thanks to the high number of matches with no background to them and the forgettable nature of the two largest bouts. It was a good night for Cody Rhodes though. If he makes it high enough to get the DVD set treatment I’d expect the tag match from this show to make an appearance. On that level at least, Battleground was a success.


2 For the record Show turning heel and Orton winning the championship probably wouldn’t have annoyed fans as much as Show KOing Bryan to instigate a DQ finish with no new champ. We don’t need to worry about this though as neither actually happened.
Posted by Dave at 08:33