The Future of North American Wrestling

The current North American wrestling scene is on the cusp of some pretty drastic changes. There are rumours that New Japan is gearing up to attempt some pretty big expansions, which could lead to some shows, perhaps regular ones, in the United States. Meanwhile TNA is floundering. The promotion has already downsized its roster. It’s not impossible we’ll see further cuts from them. Particularly notable is the departure of Hulk Hogan. His paycheque can go into the savings kitty and it’s entirely possible he won’t ever be back.


On the surface Ring of Honor, Pro Wrestling Guerrilla and Dragon Gate USA seems unaffected by what's happening to the big boys. That's true for now, but if some or all of the above happens it could have an impact on them. It could possibly even affect the pool of even smaller indies on offer.


For starters NJPW running shows in the US could see attendance at indigenous shows drop. If New Japan do promote shows in the US I imagine they'll focus on the east coast, because that's where they'll be able to draw best. PWG, who only promote shows at one venue in Northern California, may not see much competition. They rely on a regular audience who are unlikely to desert them for the glitz and glamour of NJPW. I could imagine New Japan putting on shows in California because they could probably get a decent crowd and it's convenient for them logistically. It's just unlikely to affect PWG in any meaningful way. 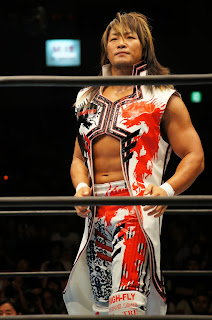 Could Hiroshi Tanahashi lead New Japan to success in North America?
Very few people who follow wrestling are able to attend wrestling shows regularly. If New Japan's offering better matches, and chances are they will be, the fans could be faced with choosing between where to spend their dollars. Scheduling conflicts could also be used to affect attendance.


Many US indies may find themselves looking for a new niche if New Japan takes an interest in the country. The last ten years have seen the Japanese style heavily influencing the majority of these companies, both in terms of promotion as well as the presentation of storylines and particularly matches. Perhaps more importantly these influences are also beginning to be felt in WWE, but that's another topic for another time. The point here is that the various indy feds who have relied on this style attracting an audience could soon find themselves in competition with the originators. No matter how good they are a Japanese promotion and its performers will outperform them in these areas with ease.


It's not all bad news. If TNA closes its doors (still bad news for TNA employees admittedly) almost an entire roster of big-by-indy-standards names will become available. It may not even take TNA ceasing to exist for this to happen. They've already parted ways with numerous mid-card talent this year. Anyone coming off of Impact Wrestling will have a little extra cache on the indies, at least for a while.


ROH would be best placed to benefit from this. As the biggest wrestling operation in North America after WWE and TNA they'll be the company most financially capable of bringing in former TNA guys. They've gotten back onto their feet this year after a few years of drifting and they have a presence on television. Nobody else would be able to offer wrestlers that combo. It's unlikely ROH would want (or be able to afford) to scoop up all available talent from whatever TNA failures are heading our way. PWG and Gabe Sapolsky's outfits will probably get a signing or two each if the worst happens.


There’s also the chance that New Japan would sign up numerous guys in the event that TNA collapses. I’m sure they’d go for Styles and men like Samoa Joe, Kurt Angle, Chris Daniels, Bobby Roode and Austin Aries could find themselves with offers too. But even after NJPW had swept up their top picks from a TNA collapse there would be plenty left for North American based companies to hire.


All of which would transform the North American wrestling business. We could potentially see ROH or New Japan become the continent s secondary promotion. A gap is always going to exist between whoever's in this spot and WWE but it's possible the gap could be a little less wide in a couple of years. PWG and DG USA could strengthen their rosters and feasibly be doing better for themselves too. Maybe we could even see some form of collaboration between Sapolsky and New Japan. He's very much a puro guy, I'm sure it's something that'd interest him. It would benefit New Japan by giving them access to an experienced local promoter.


There are other possibilities, of course. As unlikely as I think it is TNA could survive. Or someone with a lot of money and their own TV channel could put together a roster of superb wrestlers and big name free agents. Don't sneer. Ted Turner did it.
Posted by Dave at 13:14