The success of the Mr McMahon character had an incredible effect on pro wrestling. It created arguably the greatest heel of the nineties, certainly one of the greatest heels ever. It helped to turn the WWF’s fortunes around and shape the Attitude Era. And of course it gave ‘Stone Cold’ Steve Austin his definitive feud.


There were many factors in the success of this character. One of them was that it sprung from a real life situation. People knew McMahon was the real life owner of the company had “screwed” Bret Hart1, which presented the company with the opportunity to present storyline developments as equally real. It was a perfect blurring of the lines, cloaking plot with reality. This is often where wrestling excels.


Perhaps an even greater reason for the character’s success was Vince himself. Nobody but him could have achieved such success with the character. It went beyond him being the genuine, honest-to-goodness boss of the company. Vince was and is an incredible wrestling personality and performer, so good at making his character easy to understand and relate to (both as a face and a heel).He understand how to carry himself in any given situation on a wrestling show because he’d been promoting them for close to twenty years when he became the lead bad guy, and had been around them since he was a boy.


The Mr McMahon character worked because everyone knew Vince McMahon was the boss, the timing was right for the role, which had been around for a while, to really be pushed to the top, and because of the events that necessitated its creation. It excelled because of Vince’s performance.


This is something that a lot of people in wrestling appear to have forgotten. The origin of the Mr McMahon character appears to be misremembered by people writing wrestling television today. The assumption seems to be that it worked because Vince really was the boss, with little or no credit being attributed to the fact that Vince knew exactly how to pitch his performance to receive the desired reaction, further plots and build towards matches.


This miscomprehension has culminated in the heel turn of Dixie Carter. If there is anyone currently involved in wrestling on any meaningful level less suited to working as a heel authority figure I can’t think of them. Her flat, monotone delivery and inexperience and inability to gauge (and engage) a wrestling crowd has been noted before. 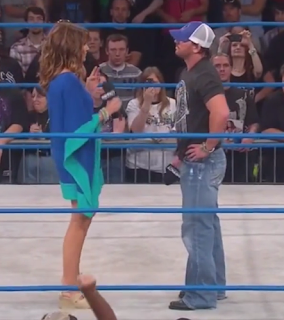 TNA's idea of compelling television
When she was presented as someone fans were supposed to rally behind it was bad. It was incredibly hard to remain interested and suspend disbelief whenever she had something to say. But ultimately her input was kept to a minimum and she was usually being used to deliver good news that fans were going to react well to, such as Kurt Angle’s Hall of Fame induction. Ultimately it was okay because her dreadful performances were overshadowed by the content she’d been given.


Now that she’s a bad guy (or gal) things are worse. She can’t be aided by the smokescreen of delivering good news. She has to deliver messages of substance and make fans actively dislike her. It’s important to note that they must dislike her, rather than simply be disinterested or bored by her. At the moment she does not know how perform this task. Nothing she’s done makes me think she’ll be able to learn.


And of course there doesn’t seem to be a plan for her turn. At the moment she is simply opposing an unruly, outspoken AJ Styles. That she’s not been linked to a wrestler means that there’s no match coming up. And ultimately that’s what every storyline should be about: setting up matches. If no matches can result from a storyline how can it be a worthwhile part of a wrestling show? This is a problem TNA could fix but I suspect that, in their usual style, they won’t until a large chunk of their audience have picked up on it.


This is a problem with wrestling in general, not just TNA. That said there is no more prominent example at this time than Dixie Carter. It’s an approach I’d like to see the industry move away from. We’ve had over fifteen years of heel promoters and storylines revolving around backstage power struggles. It’s time for something new. Something that doesn’t so frequently place people very clearly not cut out for prominent on-screen roles into the spotlight.


1 Easy to take for granted now, it was not common knowledge at the start of 1997. It became an aspect of company programming throughout that year.
Posted by Dave at 09:17