That Wrestling Podcast Episode 9 by Dave Hatton on Mixcloud

This episode of That Wrestling Podcast introduces a news feature to proceedings. News is something I’ve generally stayed away from before now as it’s boring to write up and anyone visiting this blog is likely to be seeing it elsewhere first. It would be an exercise in futility.


Two things make the news segment on the podcast different. The first is that we’re talking about it. It’s much easier to talk about something that write about it and then edit it and then post it. Basically it’s less work for me. I’m a lazy man, so that appeals. Secondly we’ve deliberately chosen marginal, comical stories that are entirely un-newsworthy and only appear on “the dirtsheets” (also known as wrestling news websites) because they feature wrestlers.


Don’t listen to this expecting a detailed view of recent happenings in the wrestling world. That’s not our style. I will say that we mention the wedding of Matt Hardy and Reby Sky, which produced the fabulous picture below. 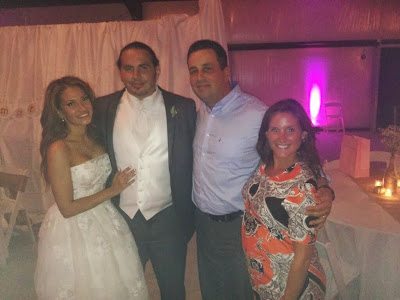 The wedding of Matt Hardy and Reby Sky

Also discussed is WWE Battleground and the news that John Cena’s heading back to our screens for a World Heavyweight title match at Hell in a Cell. Plus there are tangents about Sami Zayn’s finishing move, Big Show’s potential turn, Stephanie McMahon, The Ascension, a potential Damien Sandow turn and how his cash-in could work at Hell in a Cell, and various other things.


It’s three quarters of an hour of pure wrestling talk! What’s not to like?
Posted by Dave at 16:27