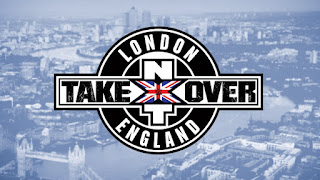 Three days after WWE had presented a decidedly mediocre show in TLC its developmental crew were dispatched to London for a show of their own. Imaginatively titled Takeover: London the show was the culmination of NXT's first tour outside of the United States and its biggest show to date that hasn't piggybacked off the success of a major WWE card. Held in front of 10,079 at a sold out Wembley Arena this was the latest piece of evidence that the NXT name is a force to be reckoned with.


NXT shows, Takeovers in particular, tend to get better as they go feature the better matches in the semi-main r main event slots. Takeover: London uncharacteristically saw the first two matches be the best of the evening.


The first was the grudge match between Asuka and Emma. They kept things even for the majority of the match. Which was smart: Emma is the longest tenured women in NXT at this point, has been used on the main roster, and world make a credible challenger to Bayley or a future women's champion. Having her look competitive against Asuka was absolutely the right thing to do because in NXT terms she was the newcomer's toughest opposition to date.


Naturally Asuka won. She was always going to. After Dana Brooke interfered and got sent backstage by the ref Emma tried to sneak in a cheap win by smacking Asuka with... something (it looked like a knee brace). Asuka ducked that and floored Emma with a roundhouse kick. A few minor miscues and wobbles aside this was an ideal opener.


The second was the tag team championship match, champions Scott Dawson and Dash Wilder defending against Enzo Amore and Big Cass. Bumped from the traditional second-from-the-top slot it's possible these lads felt they had something to prove being so low down the card (although there were only five matches on the show and every one of them had been built to very nicely). They had the match of the night, not something you'd expect to be said of a Realest Guys match usually but they worked their socks off here.


The match featured the usual Enzo and Cass routine of Enzo being worked over and working towards a hot tag to Cass. Dash and Dawson were perfect opponents for this approach as they're entire act is about them being a precise team who know how to isolate an opponent and target a body part. What was different here was that when Cass tagged in he found himself getting worked over. Dash and Dawson being so in tune with one another that they can break down a big man like Cass gave their credibility a healthy boost.


The match was built around Enzo and Cass constantly working towards tags and getting and escaping from near falls. The finishing sequence was tremendous. Cass got a desperation rollup on Wilder who got kicked out and then walloped back down by a Cass boot. Enzo was tagged in and hit his assisted top rope splash for what the audience knew would be the three count. And it would have been had Dawson not pulled Enzo from the ring. After trying to use Carmella as a human shield (in a nice touch Carmella showed she didn't need her lads to save her by elbowing Dawson in the face herself) Dawson threw Cass into the ring post and the champions hit Enzo with a Shatter Machine from the second rope to successfully retain their belts.


The build to and pre-match video for this bout made it seem as though we'd be getting a title change. That Dash and Dawson managed to retain through craftiness makes them a legitimate threat and gets the right kind of heat on them. It also keeps Enzo and Cass in the chasing babyfaces role they seem best suited to right now, and keeps long term NXT fans hungry for their eventual title win. At this point Dash and Dawson's team name should be The Dream Killers.


Speaking of the right kind of heat (yes, I did just mention it, check back a few paragraphs) Baron Corbin was on fine form on this show. He isn't a man looking to be the cool anti-hero or the edgy bad guy. He wants people to dislike him because he's a heel and heels are supposed to be disliked. More wrestlers should take that approach. He has some of the most real heat in WWE today.


What made him so good here was his ridiculous attempts at trash-talking. He did everything from claiming Crews was in "his house" to shouting at Apollo that he should have "stayed in Ring of Honor." Crews has never worked there (the closest he came was a string of PCW shows co-promoted with ROH) and this was the kind of crowd that was going to know that. He was unintentionally hilarious, which only helped to up the already strong jeers from the crowd.


The match itself, while nothing special, was good. They set a brisk pace and worked competently, avoiding any major slip ups, and did some ringside brawling (surely the style Corbin will become most known for). They were never going to have a workrate spectacular but they had the best match they were going to.


Corbin won, clean as a sheet, with End of Days. It was the right win. Corbin has been built up as a guy who loses rarely. It's part of what makes him so effective as a heel. This was a logical first loss for Crews to take. And it positions Corbin for a title shot soon, also a logical move.


Bayley versus Nia Jax was preceded by the crowd singing to Bayley. There were lots of examples of fun and amusing chants from this crowd but this song for Bayley was my personal highlight. It was clever and fit perfectly with Bayley's popularity-based character.


The match itself was not the sort of exchange we've become accustomed to from the women's divisions. It was not Sasha Banks versus Charlotte but the pair played to their strengths. After an opening flurry in which the more experienced champion tried to put her challenger away quickly and decisively Jax took control and unleashed a terrifying onslaught of offence against 'The Hugster'. The story they told was all about Jax doing everything in her power to destroy Bayley as she has every jobber she's run up against so far and Bayley weathering the storm with her usual resilience and determination. The finish played into this, Jax making one mistake, putting herself into a foolish position because of inexperience, and Bayley capitalising on that to lock in a front face lock and body scissors for the submission win.


This match was easily the best work we've seen from Jax to date. It was also more confirmation that Bayley doesn't need the other three of the Four Horsewomen to have gripping matches. Which is important if she's to earn herself the larger main roster role she clearly deserves.


The show closed with Samoa Joe versus Finn Bálor for the latter's NXT championship. Of course this match was good. It wasn't going to be anything less with two very experienced lads involved. They did everything we'd expect: all their usual spots, kick outs from big moves, topes, ringside brawling, and reversals of finishers. But it never seemed to quite hit the heights it could have. Perhaps this is a side effect NXT being such a good product, it's more noticeable when a main event doesn't live up to the standards of a strong undercard. If so I know it's an unfair complaint. But the fact remains that Finn and Joe weren't in the best match of the evening and Enzo Amore was.


Takeover: London was a fine show. It was not the best Taleover card we've had but I think we've reached a point now where that's not just understandable but it's too be expected. The roster could not keep on topping exceptional shows. This was good, just not the best we've had. It was markedly better than the main roster though, and for a team branded " developmental" that should always be the goal, because if they can better the main crew the NXT regulars know that sooner or later they'll get moved up to join them.