I didn't write about TNA's British Boot Camp while it was on. I had mixed feelings about it. On the one hand it was a clever move by TNA that made use of the group’s popularity in the UK. It gave us extra programming starring wrestlers who, as they were Brits, we should find that little bit more relatable. It was well times too, airing at just the right time to serve as advertising for the company’s January tour. On the other hand it was another example of American wrestling dipping into the British scene for its own needs.

I'm not the most knowledgeable or vocal supporter of British wrestling but I am a supporter. I know that the men and women wrestling in Britain work just as hard as those elsewhere and generally do so for significantly less cash. I also appreciate that most of them, as with the majority of North American wrestlers I imagine, want to eventually earn themselves a WWE contract. I certainly don't begrudge any of the Boot Camp contestants the chance to work for TNA. It could be a stepping stone to WWE. Even if it's not it will get them a considerably larger paycheque than working in Broxbourne ever would.

I appreciate that another series of Boot Camp would be a good thing for anyone wrestling on it and for TNA. It would be nice for anyone who enjoyed the first series too, and I know it was very popular. It could even be considered a minor boon for the British scene, shedding light on some of its best workers and encouraging people to attend a show they’d otherwise overlook. But the greater effect will be detrimental. The more successful the show proves the greater the number of wrestlers Britain will lose. 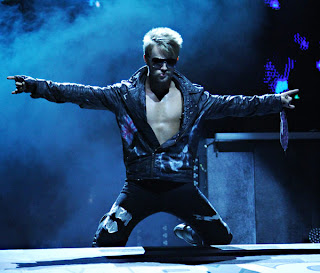 Coming to an IMPACT Zone near you

The fact that TNA can get away with running a show like this is depressing. This country provides the promotion with its biggest crowds of the year and has done ever since they started their annual tours. WWE runs two tours a year here because they always do well too. There are plenty of wrestling fans in Britain and yet (here's the depressing part) not one of its dozens of promoters has managed to create a product that showcases British talent the way they deserve to be showcased.

I'm not suggesting that a British indy could compete with TNA or WWE. It would take a very long time and a lot of hard work to come close to being at TNA's level and I don't think a UK group could ever reach the heights of WWE. I’m not suggesting a TV deal is attainable either (though I did suggest an alternativeto TV last year that I stand by).  I do think that with the right people in charge the early Ring of Honor model could be successfully emulated though.

Broadly speaking this would mean finding a core group of wrestlers to use as the basis of the roster and running shows with the intention of breaking even on the night and making a profit through DVD sales. The emphasis wouldn't need to be the same as it was for ROH, quality matches are popular yes, but a healthy dose of storylines could have their appeal too.


Perhaps it’s expecting a lot for one company to rise above the rest when so many share the same workers. A working agreement could be reached though, surely? Maybe an all-British version of the National Wrestling Alliance? Only the NWA of the 70s, not the NWA of today. Because the NWA of today is rubbish.


It would be nice if this country's wrestlers and fans had a home-grown alternative to the North American product. A company that would allow a couple of dozen guys to work as full time wrestlers in Britain without leaving the country that supplies viewers with regulars DVDs and-or a regular TV or YouTube show. The wrestlers and the fans are there. It just needs someone to create a big enough splash and grab some attention.
Posted by Dave at 19:52