A recurring theme in my NXT recaps is comparing NXT to Ring of Honor and Extreme Championship Wrestling. Part of this, at least in the case of ROH, is that a number of the same names crop up on both shows. Meanwhile some of the guys who have never worked for either league feel like they’d have worked there (such as Bray Wyatt, who I’ve compared to Raven).


The general feel of a one hour weekly show is another factor on the comparisons. The shorter running time makes a certain format necessary. RAW can afford to have filler matches and pointless skits because it lasts for three hours. At one hour long ROH and NXT’s TV shows (and ECW’s over a decade ago) have to make sure that everything broadcast has a point. Whether that’s to get over or introduce a new star or advance a storyline doesn’t matter, there’ no time for filler.


NXT is also more inclined towards gimmicks than the rest of WWE’s programmes. This of course puts it into the same league as ECW. Leo Kruger’s African walkabout gimmick could have cropped up in late 90s ECW. It seems likely that a character change will take place before Kruger makes it to the main roster.


As it stands now I can’t see the guy on RAW each week. Then again Fandango, one of the most gimmicky creations of the last ten years, is gracing our screens each week so I could be wrong.


I don’t know for certain but I imagine this sort of approach to a wrestling TV show, one that makes cutting anything not important a necessity, is ideal for talent hoping to get a call up. It forces them to make the most of everything they’re given to do and raises the overall quality of the show.


Unrelated to these thoughts: I enjoyed the confrontation between Ohno and Regal this week. I was surprised that Ohno didn’t display more aggression. Presumably the change will come about over the coming weeks, likely as he takes the decision to goad Regal into a singles match. As I wrote last week that could be great.


Tweet 1: NXTweet.
Tweet 2: A recap of Oliver Grey being duffed up because he's too injured to compete. Great cover story.
Tweet 3: Also, words from Adrian Neville that nobody understands. It's like listening to Michael from I'm Alan Partridge.


Tweet 4: Why does Gabriel's vest have a zip on the back?
Tweet 5: I wonder if Byron Saxton feels depressed because he's not allowed to wrestle on TV anymore. He probably does.
Tweet 6: 'The Elaborate Secret' Leo Kruger.
Tweet 7: Hair pulling from Kruger there. What a heel!
Tweet 8: Look at Gabriel's hair. Can you imagine him working in Costa with that hair? Because I can.
Tweet 9: That'd make an interesting gimmick actually. Gabriel could do a mist blowing spot as his finish and claim it's coffee.
Tweet 10: He could drink coffee immediately prior to a match to hype himself up. Like Popeye with spinach.
Tweet 11: Also, sponsorship of wrestlers is something that's yet to take off. Gabriel could be a trailblazer. Costa written on his trunks? #win
Tweet 12: He could turn heel by debuting trunks with a Starbucks colour scheme. People would go nuts at the betrayal of 'The Barista Hero'.
Tweet 13: That's barista. Not Batista. 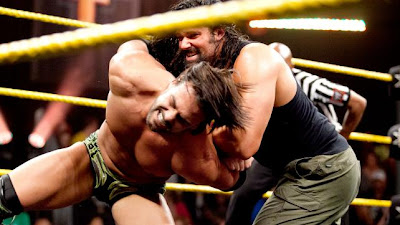 Kruger is showing that barista who's boss!

Tweet 14: Gabriel's kicking a kneeling Kruger. Bryan does it better.
Tweet 15: "Look at that move!" - Tony Dawson, play-by-play commentator
Tweet 16: Kruger's got a nice set of moves for working on the arm. Good stuff.
Tweet 17: 'Captain Secret' Leo Kruger wins with the London Dungeon. That really needs to be given a more relevant name for when he uses it.


Tweet 18: Oh good. An Audrey Marie interview. these are always GREAT. And her feud with Sasha Banks? Scintillating.


Tweet 19: Ohno's new music is a bit disappointing.
Tweet 20: Regal apologises. The crowd seems to dislike this for some reason.
Tweet 21: Ohno seems disappointed too. That's more understandable though. 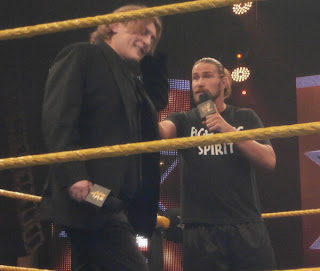 Tweet 22: Nice of Ohno to put over the European tournaments and indy scene.
Tweet 23: "Don't boo me!" - Kassius Ohno to the fans (who should be booing themselves)
Tweet 24: That was a really cool segment. I'm looking forward to their match.


Tweet 25: Bayley, another female wrestler with an absence of surname.
Tweet 26: Bayley's gold and jade colour scheme is interesting. It'd work well on a mask. Which makes me wonder if there are female luchadors.
Tweet 27: Probably are. I'm just unaware of them.
Tweet 28: Why doesn't Mike Chioda work on NXT? Too much of a big shot I s'pose.
Tweet 29: Summer Rae was never going to pull off that run-in successfully. The rule is that wrestling gear must be worn for a run-in.


Tweet 30: According to Regal Neville is the pride of Britain. No. Just no.
Tweet 31: Rochester, New York is a distinctly un-Southern hometown for a member of the Wyatt Family.
Tweet 32: When Bray Wyatt was on the main roster as Husky Harris he seemed like just another guy. The preacher gimmick has been a great move.
Tweet 33: I liked him as Husky. It was a good name and he looked like someone who could succeed in ROH. I prefer the Wyatt character though. 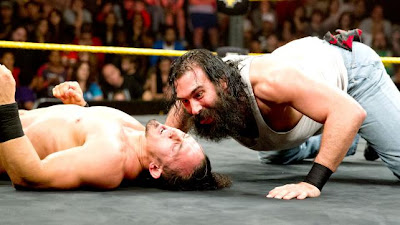 Note the rag in the back pocket

Tweet 34: He's not in this match though. Adrian Neville is, and I like him too. Particularly the Union flag on his trunks. Nice touch.
Tweet 35: Harper wins off a top rope fall and a clothesline. To say that's anti-climactic is an understatement.
Tweet 36: If Oliver Grey was there why didn't he go to ringside at the start of the match? Stupid babyface.
Tweet 37: Bo Dallas is getting involved too. His feud with Bray Wyatt, a heel with his own (small) entourage, makes him the Tommy Dreamer of NXT.
Posted by Dave at 13:56